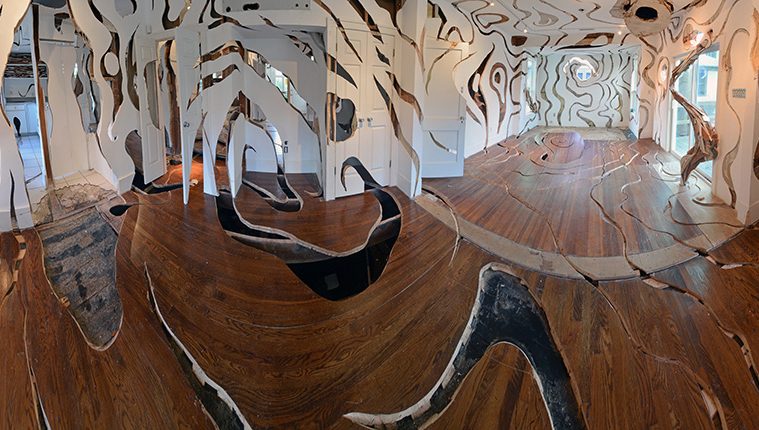 Ripple, on view at Cherryhurst House through Jan. 1, 2019, is the latest and perhaps the most ambitious deconstruction/transition project by the Houston-based artist collective Havel Ruck Projects.   For more than 20 years, Dan Havel and his partner Dean Ruck have embraced structures which seem to be at the end of their life, breathing into them a new context and vision to create compelling “swan songs.” The temporal quality and public aspect of Havel Ruck’s work is the common element behind their collaborations. Though not preservationists, they value the craftsmanship revealed as the layers of history and time are peeled back.

The pair’s latest project began with an ordinary bungalow located in Houston’s Cherryhurst neighborhood, which they were to transform into a memorable immersive environment (the artists were selected for an artist’s residency at Cherryhurst House in the summer of 2017). Cherryhurst House, open by appointment and located in a private home in Houston, was inspired by founder Dallas McNamara’s desire to encourage the interactive artistic process and site-specific experiences. The artist-in-residency program began in 2012, and Havel Ruck Projects is the fifth to date.

Over the course of seven months, Havel Ruck used drill saws and other tools to carve out sections of the house’s sheet-rocked shiplap walls, hardwood floors, and ceilings. “Ripple” describes the swirling cut-outs, many of which resemble ripples in a body of water. Other shapes are incorporated as well, particularly variations on the oval, the spiral, and the arabesque. Some ripples begin on the ceiling, continue down the walls, and wind across the floors. The carving and cutting is extensive but avoids any loss to the structural integrity of the house. Large openings in the ceiling reveal the underside of the roof, while narrow cutouts in the floor allow glimpses of the substructure. The effect can be disorienting, especially in areas where Havel Ruck have sliced spiral shapes into the floor, pried up those sections, and supported them with wooden beams.

Ripple is essentially a three-dimensional sculpture executed with amazing attention to detail. The exuberant, asymmetrical forms create a sense of movement and instability. In daylight, the large wall cutouts allow light to flood the space and frame views of the exterior environment and outside activity. Walking through the house, one also glimpses the feet, head, or shoulders of visitors in adjoining rooms. The overall effect is both astounding and stunning.

Ripple is much more than creating negative space—it is also a major assemblage. In the bathroom, for example, the tub is a receptacle for scraps of wood arranged in a spiked pattern. This concept of additive areas began in the front room, when Havel and Ruck started kicking odds and ends into what was once the fireplace. They jammed open cabinet areas in the kitchen with pieces of mangled sheetrock and continued until, according to Havel, they “ran out of cubby space.” Various forms that have been cut from the house are attached to windows and glass doors in response to nearby negative areas.

Havel Ruck have been deconstructing buildings since O House in 1995, when they transformed a condemned structure into a walk-in camera obscura. Ripple is their twelfth project and perhaps the most complex due to the extended time frame available to them. This process contrasts with their last 2016 project, Sharp, which was planned and detailed well in advance. While working on Ripple, Havel and Ruck constantly reacted not only to the structure but to one another. They worked both in concert and separately as their work schedules did not precisely overlap. Consequently some ideas began as one artist’s singular inspiration. For example, Ruck created a spiraling sculptural form somewhat reminiscent of their 2014 Art League project, Inversion, and attached it to a glass-block wall in the kitchen. According to Havel, that addition inspired him to “up his game.” Hence, Ripple also refers to a working style in which each artist’s work informs the other, much like a large “exquisite corpse” drawing.

In addition to Ripple, the adjacent Cherryhurst House gallery space offers a rare opportunity to view individual works of art by the two artists. There are shaped and manipulated found-wood wall sculptures by Ruck and mixed-media paintings on paper and assemblages by Havel. The latter, like Ripple, references past lives from the detritus left behind, composed as they are of fragments of letters, vintage photographs, games, and mysterious found objects.