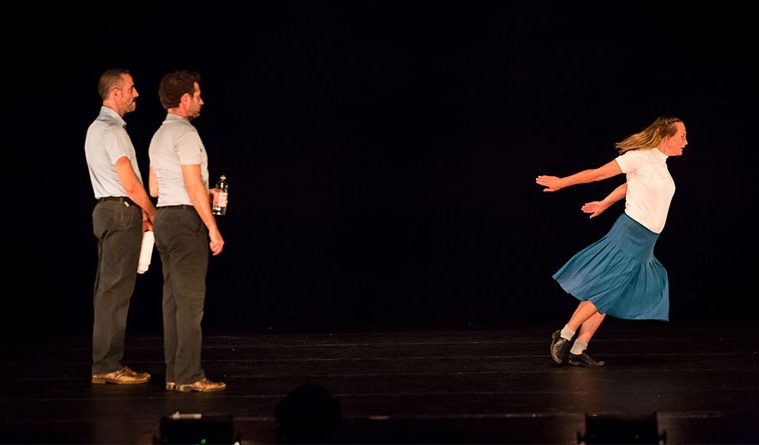 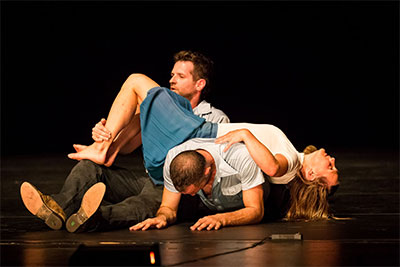 When Niv Sheinfeld, Keren Levi and Oren Laor’s Big Mouth started with a pedestrian walking pattern I knew to pay attention.  Having seen Sheinfeld and Oren’s work Cowboy at International Exposure in Israel last December, I remembered that these are slow burn choreographers. Cowboy started with a long stretch of clogging and line dancing until it unraveled into a funny and searing commentary on identity, masculinity and border politics. Big Mouth spilled out on the Miller Outdoor Theatre stage as part of CORE Presents Dance from Israel, like a Steve Reich composition, where tiny changes made for a big impact. In fact, it’s the sturdy arch of Big Mouth that gives the piece its punch.

The trio (Sheinfeld, Laor and Levi) continue their parade across the stage, but things start shifting, all of which made me think about how that happens in a group. Walking evolved into changes of direction and slightly more complicated patterns all performed in exquisite unison, until Levi decided to bust out. In a few minutes time, they traverse a multitude of ideas: the odd man (or woman) out, being out of step, left out, not keeping up, tripped up, left behind, catching up, plans switched mid-stream, going your own direction, following, refusing to follow, conformity, refusing to conform, sneaking away then trying to get back in step, and finally busting loose. It was all there, everything that can and probably will go wrong in a group or in a coercive situation. It’s amazing how much they pack in that casual stroll.

Eventually, Levi is left on her own, and here is where we see that unmistakable quality of contemporary Israeli dancers, plies that go on forever, off kilter turns and balances full of risk, yet backed by powerhouse control. It’s earthy and exacting, a rare mix, and in short supply in today’s dance world.

The men return and a clever pas de trois unfolds, but with the nuts and bolts of holding, arranging, lifting and supporting fully exposed, as if those movements are as important as the final shape of each sculptural tableau. Somewhere toward the end, Levi plants herself downstage with a wide open mouth for an excruciating long time while the soundtrack switches to the patriotic anthem of the Israeli 7th Brigade made much more so by Ori Vidislavski’s heroic music. One doesn’t need to speak Hebrew to know that her face and the words stand in harsh contrast. It’s somewhat painful to watch. The piece ends with Levi walking off stage with Sheinfeld and Laor looking at each to other as if to say, “What just happened?” 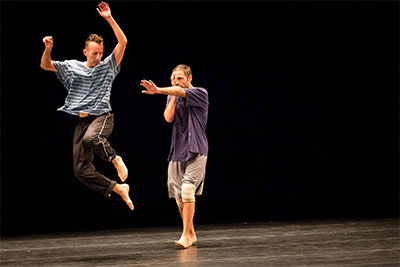 Heroes part 2 is an early work by another renown team of Israeli choreographers, Oded Graf and Yossi Berg, which was also performed by the pair. It’s the second half of a full length work called Heroes created in 2005-2006. Their most recent work, Come Jump With Me, which I found to be one of the most memorable pieces at International Exposure, is also a duet. Graf and Berg relayed to me after the show that most of the works in-between are group pieces.

Heroes part 2 is an endearing portrait of men at play, love, competition, connection and other shenanigans. Graf and Berg gallop about with reckless abandon in some mindbogglingly tangled movement sequences, haphazard on the surface, but remarkably precise in execution. We learn how exact they really are when a sequence is repeated with each detail intact.

Graf and Berg move with an animal grace, free, elongated, off-balance, yet so capable of a mid-turn change of direction. There’s such a generous sweep to their motions, some of which are resolved in clever theatrical moments of one upmanship. The design of the dance is more located in its momentum than static shapes.

Heroes lets Graf and Berg’s full throttle charm shine through, especially in the intoxicatingly ingenious partnering. I’d like to imagine that their onstage charisma and connection to each other could be felt from the top of the Miller hill. We root for these two as they lay motionless on the stage floor as the lights go on and off, and finally fade to black.

It could not be more timely to see Anat Grigorio‘s Mr. Nice Guy in the midst of this presidential election, which has contained some of the most contentious anti-women rhetoric I’ve ever heard. We only need to have listened to the last debate to know the kind of language has been tragically normalized under Trump-ism. Grigorio addresses this brutality head on in Mr. Nice Guy in a primal solo performance. 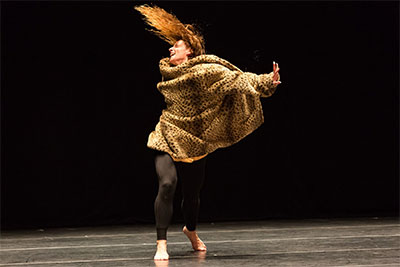 She enters wearing a slinky black dress and a leopard coat, while a disembodied male voice instructs to lift her chest, push her shoulder forward, make kissing faces, stick her butt out, smile, and so on, until the list becomes so absurd that he asks her to “speak Chinese.” We laugh, but the next instruction, “bark like a dog,” veers off into a darker direction. Finally, he says, “Be yourself,” at which point she remains snorting like a pig and stumbling across the stage. Grigorio evolves into a Alpha female, swinging her long hair in an action of reclaiming her power and voice.

I was a little worried how the American dancers would fare in this evening, but I was pleasantly surprised by the energy the CORE Performance Company dancers gave to Sheinfeld and Laor’s excerpt from American Playground. It’s a work still in the making, so it’s too soon to comment on the content, but the commitment was there in full in this playful romp that sets forth a community of storytelling and fearless dancing.

Sure, this program might be entirely different and possibly more successful in a smaller and more intimate venue. But bravo to CORE Performance Company founding artistic director Sue Schroeder and Miller Outdoor Theatre executive director Cissy Segall Davis for daring to put this subtle, sometimes difficult work, on a big stage usually reserved for family fare. These are all important Israeli artists with international reputations, none of whom have performed in Houston (or Texas) before. We could use more of this kind of big, bold Texas-y thinking. 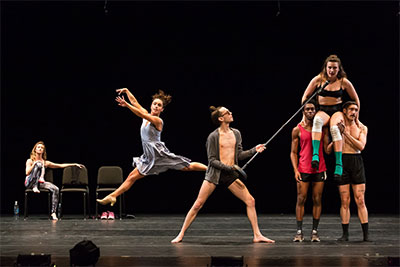 Some folks may have thought they were going to see Israeli folk dance, others may have expected something more in line with the more mainstream Batsheva oeuvre. Instead, they were treated to a glimpse of the depth and breath of contemporary Israeli dance and physical theater today in the work of Sheinfeld, Laor, Levi, Graf, Berg and Grigorio on a breezy fall night under the open air of Miller Outdoor Theatre. A rare experience indeed.

Schroeder continues her interest in Israeli art in Atlanta where CORE is also based, with EXPOSED, a festival of ground-breaking theater and dance from Israel, through Nov. 19, produced in partnership with CORE, 7 Stages, Emory University Dance Program/Candler Concert Series, Rialto Center for the Arts at Georgia State University and Kennesaw State University.