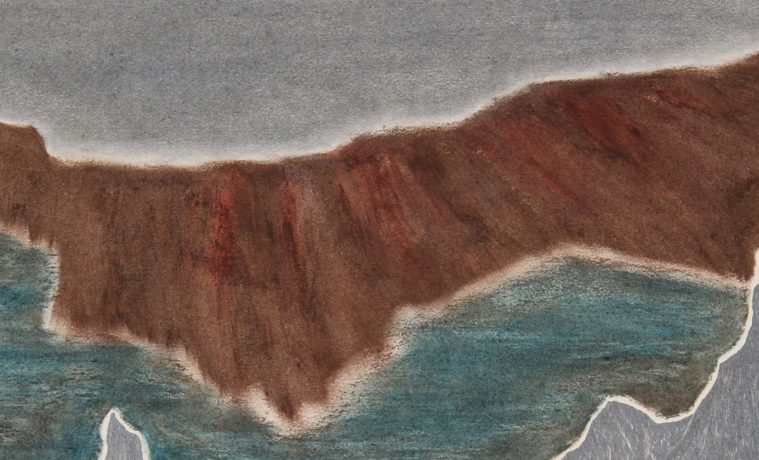 WE SPOKE MIRAGE, Robyn O’Neil’s third exhibition with Talley Dunn Gallery, presents 20 drawings made with graphite, oil pastel and collage. O’Neil’s meticulous mechanical-pencil drawings featuring tiny, similarly-clad men and envisioning tragic narratives have been exhibited internationally. In 2009, one such drawing was honored with the $50,000 Hunting Art Prize, the largest cash award given in the United States for a single two-dimensional work of art. (O’Neil, who has since moved to Thousand Oaks, Calif., was living in Kingwood when she won the prize, which is open to Texas-based artists.)

O’Neil’s new drawings introduce colorful, atmospheric perspective to her characteristic pencil drawings of craggy and rolling landscapes. Themes of land, water, and air continue in this exhibition while leaving behind prior storytelling motifs to focus on capturing a sense of wonder and fear.

Landscape practice has evolved from the 17th century, when artists illustrated the quiet and ideal beauty of pastoral scenes, to the hyper-mediated photo-realistic images that abound today. Contemporary artists now use landscapes to explore complex human interactions with place, as evidenced in O’Neil’s work. Rather than pointing to the specifics of any place in particular, WE SPOKE MIRAGE focuses on the sensory effects that these imagined places cause for the viewer.

The Black Sea’s Undersong imagines an apocalyptic, subterranean landscape that evokes a terrible and sublime beauty of the kind described by philosopher Edmund Burke, who wrote, “Whatever is qualified to cause terror is a foundation capable of the sublime.” The piece’s large scale invites the viewer to linger in the majesty of the fearsome natural forms that yawn before her. Across the picture plane, advancing and receding mountains give way to a partially obscured, black, lava-like form. Nearest the viewer, upward thrusting craggy stumps counterbalance a rusty flame-like shape in the right third of the composition. At the piece’s center, mysterious, spiny forms create a dynamic scene, similar to those painted by surrealist Yves Tanguy.

Smaller and mid-sized works like New Mexico, If You Want Blood and Morning invite us to peer over precipices into an undulating abyss of rich textures and color. Pieces like Mist draw the viewer into a quiet and eerie state, giving one pause for long enough to feel the sense of mystery O’Neil is trying to evoke.

As with her earlier works, in which O’Neil uses details to suggest hopelessness in the narratives of her tiny men, the artist continues to place hints that something threatening awaits in each landscape. In The Watcher (2013), a pair of glowing red orbs peer from either side of a yellow stripe, hearkening to Nietzsche’s injunction that as we gaze into the abyss, the abyss gazes also into us.