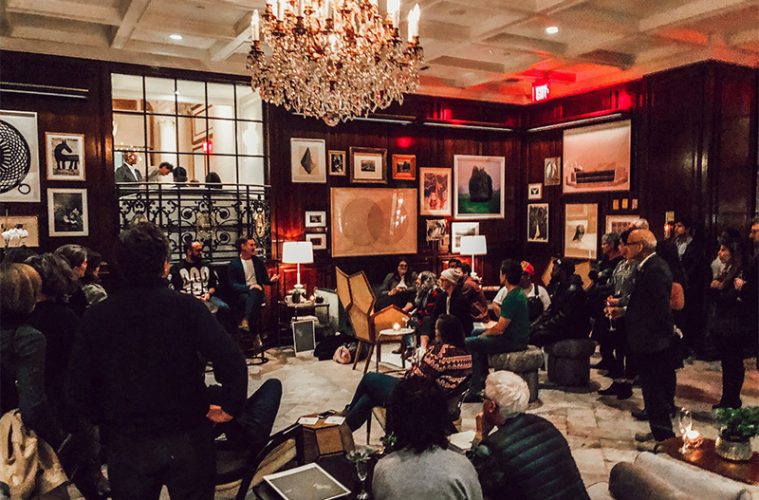 Emerging artist Christine Hoang writhes on the floor to a spliced video of Wingers’ hard rock single Seventeen, familiar Trump sound bites, and bits from the Kavanaugh hearings. A cake hand-painted in the style of an 18th-century French portrait sits atop a concert grand Steinway (once  bound for the RMS Titanic), before being served by established painter Keer Tanchak. She stands in front of another painting; unframed, French-inspired Ready To Kick Ass.

This is French Room Salon and Culture Jack, two distinctly different series of art events, both gifted to Dallas towards the end of 2018. Although varied in format and feel, both series bring people together in close proximity, where they are subject to new art and ideas on a monthly basis. Salon and Culture Jack offer not only the arts community but a wider assortment of Dallas’s citizenry new ways to engage with art outside of the galleries, museums or art fairs. 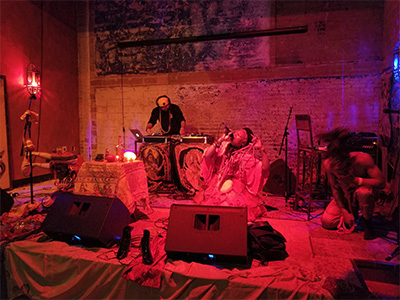 A collaboration between the historic Adolphus hotel and Lucia Simek—artist, writer, and communications manager at the Nasher—was the beginning of the seven-part monthly series known as Salon, an event that brings individuals from within as well as outside of the art world together in the French Room Salon at the Adolphus, for a series of talks about the newly acquired collection, curated by Simek.

“It made perfect sense to extend the curatorial mission of the new collection and use the Salon as a true gathering space…to take the chance to engage with artists, thinkers, and influencers that might enrich the experience of the city,” says Simek. “Because the Adolphus is bringing in people to see the talks that are not connected to the Dallas art scene, it is helping expose people from other walks of life to the thoughtful and incredible talent in this city that they would perhaps not otherwise encounter.”

The theme of each talk depends completely on the speaker, a mix of emerging and established artists as well as gallerists and writers, all of whom have contributed work to the space. After an introduction by Simek, a speaker may go on to tell the story of what inspired their practice or particular piece, or answer a series of questions from the curator, often inviting open discussion either through opening the floor for additional questions, or inviting guests to come up for more intimate conversation.

“By giving artists and other thinkers a chance to discuss ideas that are tied to themes within the collection, such as architecture, fashion, food, car culture, and connections between France and Texas, we’re getting to hear from artists and thinkers in a space that isn’t institutional or commercial,” adds Simek.

These varied ideas and themes have been approached in a number of ways. Bruce and Julie Webb of Waxahachie’s Webb Gallery gave a talk titled “Punk Rock Sensibilities,” sharing the stories of how the outsider art once found in their space and now hung on multiple walls in the Salon came to be. Scottish writer and curator Gavin K. Morrison presented a talk centered around insights on the correlation of Napoleon to food and myth-making. Emerging artists Travis LaMothe and Francisco Moreno shared their appreciation for automobiles as sculpture serving as status symbol, accessory, or social identifier.

Changing the rules by pulling art away from institutions or commercial spaces offers a change in the sort of discourse around that art, and perhaps, a change in the process of deciding whose work gets to be seen. Certainly, the change in who is having the conversations becomes palpable. 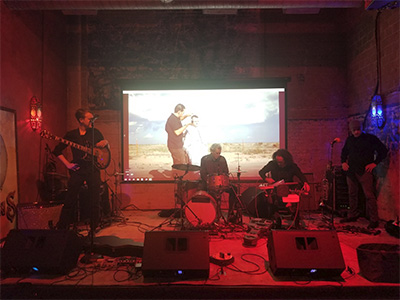 “We’re getting to hear from artists and thinkers in a space that isn’t institutional or commercial, and so the rules of engagement are very different,” say s Simek. “The conversations are pulled away from any market or institutional agenda, and I think the energy that makes is really refreshing for this art community.”

Further enriching the city and its art scene (or scenes) by subverting our expectations around how art is experienced or what opportunities there are for artists in Dallas to present their work, writer and social practice artist Darryl Ratcliff hosts Culture Jack in a small space with a separate, semi-secret door at Ruins, a Deep Ellum bar with a glowing red exterior sign, reminiscent of something you’d see in a movie about Vegas in the ’70s.

“Culture Jack is a multi-genre performance mashup that intentionally tries to create programming for artists and audiences who don’t normally share the same space,” says Ratcliff, who wonders, “How do choral performers singing Bernstein sit with indie rock and how does poetry sit with trap music?”

The lack of answers would be focused into what would become Culture Jack, an event that has opened with Ratcliff’s own poetry numerous times. Artists including emerging artist Xxavier Carter and established artist K. Yoland, both making considerably different work but dealing with similar themes of place and identity in America, have performed or contributed a piece for screening, film being an important element to the work of theirs experienced by Culture Jack attendees.

New ideas inevitably come from exposure. What Simek and Ratcliff are doing provides a different sort of access for both artist and audience, and it is the new things that remain to be seen that make these artist-led events important for the future of the Dallas arts community.