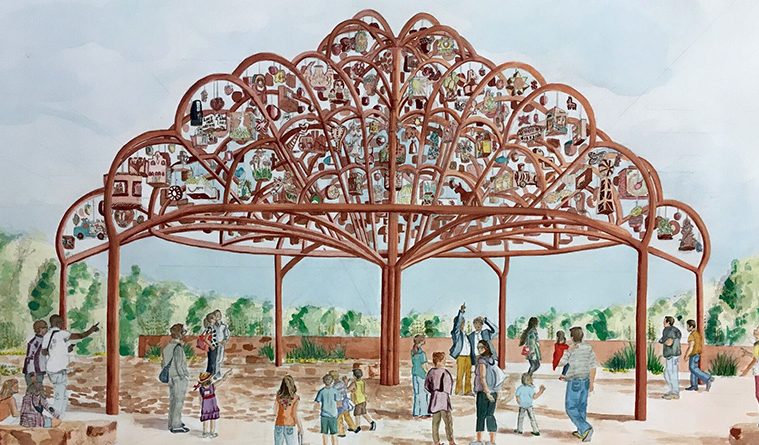 Installation of steel tree structure commenced in mid-April, 2018; 700 clay sculpture pieces will be installed on the tree through the summer.
Image courtesy San Antonio River Foundation. 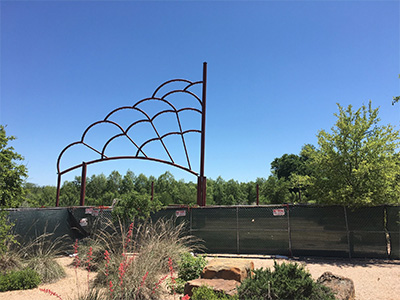 Installation of steel tree structure commenced in mid-April, 2018; 700 clay sculpture pieces will be installed on the tree through the summer. Image courtesy San Antonio River Foundation.

For the better part of a year, Phoenix-based artist Margarita Cabrera has been working on Árbol de Vida: Voces de Tierra, a community-based sculpture for San Antonio’s Misión Espada and Rancho de las Cabras. The installation, commission by the San Antonio River Foundation, is slated to open in October of 2018.

Cabrera was born in Monterrey, Mexico and has lived much of her life in Houston, El Paso, and currently Phoenix. Her work is highly empathetic to social-political community issues, much of which has evolved and expanded to collaborative processes involving entire communities.

The project was initiated in 2003 when the San Antonio River Foundation led the charge to beautify the area along the San Antonio River. Currently, SARF is focusing its attention on Mission Reach in the southern edge of the city, with beautification projects such as public parks, public art installations, and habitat restoration along the river, including site-specific, permanent sculptures and enlisting national contemporary artists such as Cabrera.

Misión Espada, along with the Concepción, San José, and San Juan missions, was constructed between 1720 and 1755. While the Alamo has remained an important part of the Texas spirit and identity, these four missions took a backseat to Texas lore and fell into disrepair and neglect. But in 2015, their fate changed dramatically when together they were designated as a UNESCO World Heritage Site.

Each mission occupies a strategic location along the San Antonio River only about three miles from each other. They are reminders of the impact of the colonization of the northern territory of New Spain in the 18th century, including the Catholic evangelization of indigenous people already inhabiting the area. Each mission functioned as a self-sustaining fortress, fending off attacks by surrounding indigenous groups, and protecting colonizers as they spread the doctrine of the Spanish crown. 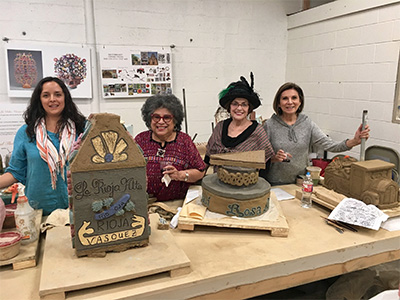 Still in process, Árbol de Vida will result in a massive canopy 40 feet tall and extending 80 feet wide, located along the San Antonio River near Misión Espada itself. The canopy will serve as the base for over 750 clay sculptures of about 20 inches in height and width, and made by over 700 individuals.

As its title implies, Árbol de Vida takes its reference from the trees of life, or genealogy trees traditional in Mexican culture, originally from the municipality of Metepec in the State of Mexico. Typically made of clay, these sculptures became popular and useful for evangelization of the indigenous population post-Conquest and in the immediate colonial period. They were crafted to tell the biblical stories visually and have evolved significantly to include secular stories and family lineages.

In the hands of Cabrera, Árbol de Vida uses the traditional tree of life to reclaim the histories of San Antonio, and to visually tell the story of Misión Espada and its role in the ranching industry. She says, “The culture of our ranching industry began with the Spanish, who established rancho de las cabras, where they also established that ranching history. But this history is also the history of San Antonio, as well as the history of the Americas.” However, Cabrera is not simply celebrating the history, but allowing the communities affected by the ranching industry, or those who have close ties to the industry, tell the story through her work. “We wanted to bring light and focus to the natural beauty around the missions as historical sites…to make sure we were celebrating the community of people who live around the mission.”

The mammoth project has come along in a various phases throughout the course of the year, and through a growing network of collaborative partners from San Antonio arts institutions, local public schools, and up to 700 participants willing to fashion their story into clay. The first phase of the project involved gathering oral histories, and learning about the impact of the ranching industry on the community through a series of open format charlas, or talks, all of which influenced Cabrera’s process as she became malleable to the needs and voices of the community directly impacted by the ranching industry. 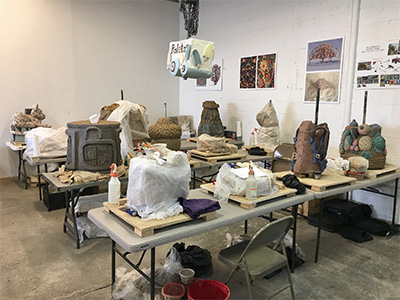 The second phase was a series of workshops for which Cabrera invited members of the community to join her in making clay sculptures that were representative of their personal history and stories. Both the charlas and workshops were hosted by arts organizations and schools all over the city of San Antonio such as Blue Star Contemporary, The Southwest School of Art, and Jefferson High School, extending the artists collaborative reach even further. The current phase is production, and according to Cabrera, “Has required a lot of patience from everyone on the team. I haven’t done a project of this scale before so we are all learning as we go.”

Cabrera’s artistic vision is largely a support for the history of the community, and a celebration of the ranching industry in the state of Texas. The monument is not narrating a history or attempting to tell the story of the hegemonic power structure, but rather of the people who have been directly affected by or who act as prominent members of their community in San Antonio and around Misión Espada. Here the nature of the public work and monument responds to an already existent narrative, relinquishing agency, and allowing for the voices of the community to narrate their own stories.