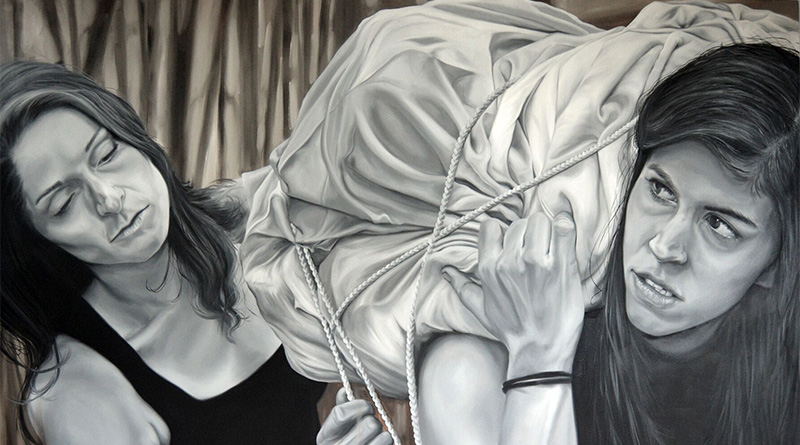 The women in Sappers and Miners, Kelli Vance’s new show of paintings on view through June 17 at Chris Worley Fine Arts, are preparing for a kind of war. Vance depicts her young soldiers in various modes of spiritual training.  While the “when” of the paintings remains ambiguous, we can assume these protagonists are fighting the same institutionalized wars women have been fighting for millennia: those of misogyny, shame, patriarchy, and domesticity. For the exhibition’s title, Vance borrowed from a nickname of the British Corps of Royal Engineers, which provide military engineering support to the British Armed Forces.

It is the absence of man, and his gaze, that truly lets these painting sing. And if we chose to look at these paintings for what they might be, they weave a song of solace and symbolism. The eight paintings of this series depict a small group of women disconnected from the fray, isolated from society, yet bonded to each other and a mystical cause, perhaps the occult, perhaps revolution. The color palette shifts throughout the show, leaving us dipped in blues, browns, and greys leaving our expectations on unsafe footing.

It is worth noting Vance portrays herself in many of her paintings; she is present and participating in moments of quiet preparation. We spot her in Spirit Eaters along with two other women, screaming into the void? And there again in Sapper and Miners, together with a friend lugging a white bag filled, perhaps, with chopped up remains of an ex’s corpse? Appearing again in We Provide Our Best Offerings to the Universe, again part of a pair, attaching satchels filled with mystery to the trunks of trees. The images are perfectly understated, leaving us to our own twisted devices, daring us to fill in the blanks with the worst of ourselves. When I look into the well of Vance’s work I see reflections of Rosemary’s Baby, The Blair Witch Project, The Craft, and The Witch, female protagonists in tune with the moon and female intuition, harboring secrets perhaps of the soil, sky, or otherworldly.

While Vance’s earlier work placed us in bedrooms, bathrooms, and kitchens dripping with eroticism and dread, here she has taken us outside, into the uncertainty of nature, akin to a Faulkner forest where time is as useless as the watch that tracks it. Such as in We Attempt to Detach Ourselves which seems to have a gravitational pull from all corners of the room towards it, and unveils a woman being blessed by stems of daisy poms in a sanctimonious gesture. The artists finds the light cast between the stems, onto the young woman’s face, creating a carousel of shadows and lines. She stands ready, with eyes closed in blind faith, accepting it from an unknown hand, perhaps the same hand which clasps over the same figure now face down in the grass and dirt in Let Me Wake in Golden Light, hinting at a possible baptism by mother earth.

Vance works from photographs, beginning with women (friends and other artists, usually) in staged scenes of endless subtexts, then painting from these images to create transposed realities where nothing is certain. Unlike earlier bodies of work, with this new series she has created strange backgrounds for these characters, surreal locales where she is free to negate formal photographic constraints and mirror nature’s chance. As well, Vance leaves in the white hairs and wrinkles of her subjects, even herself, a small gesture perhaps glossed over if the painterly hand had been male. What a perfect storm today’s political climate makes for her coven of renegades.