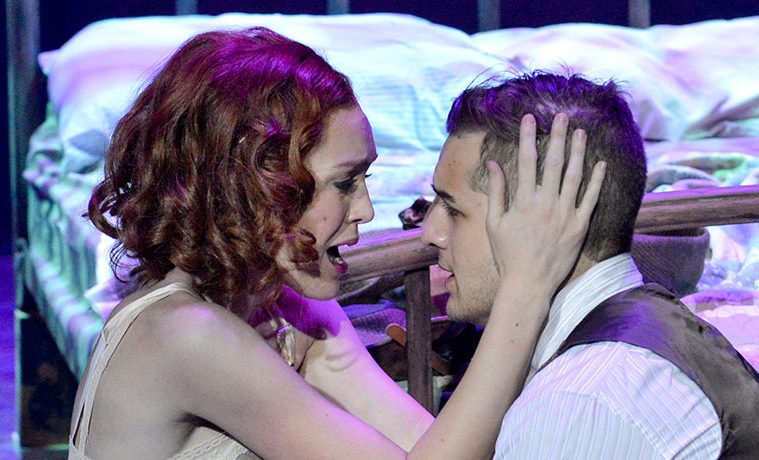 John Campione as Clyde and Kayla Carlyle as Bonnie in Watertowwer Theatre’s production of Bonnie & Clyde. Photo by Karen Almond. 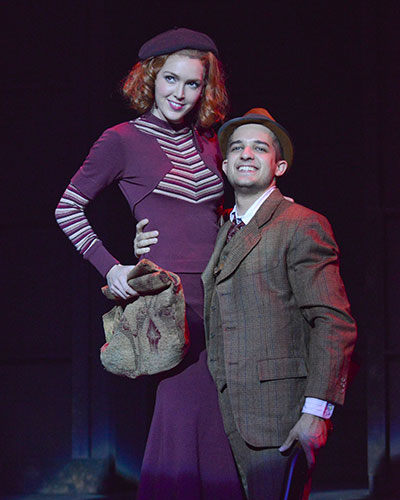 John Campione as Clyde and Kayla Carlyle as Bonnie in Watertowwer Theatre’s production of Bonnie & Clyde. Photo by Karen Almond.

Blink and you may have missed Bonnie & Clyde’s Broadway run in 2011. The show ran for a mere four weeks before shuttering at the Gerald Schoenberg Theatre. I’m admittedly a new musical skeptic, I think it’s an art form that’s better remembered and revived than constantly recreated, but don’t let the failed Broadway run fool you. Bonnie & Clyde the musical has every ingredient necessary for musical theater success; sex, guns, hook-filled ballads and, of course, a romantic subject. While this one doesn’t deserve any awards, and doesn’t necessarily change my mind about new musicals, it’s a fine piece of traditional, musical theater entertainment and the cast in Watertower Theatre’s production, on stages until Nov. 2 does the material more than justice.

The musical’s plotis, rather predictably, predictable. We open on a young Bonnie (Alexandra Doke) and Clyde (Andy Stratton) prophesying their future and dramatizing the impoverished upbringing they both had in depression-era Dallas with a song. They play a brief role, appearing once more near the end, before Bonnie and Clyde grow up into Kayla Carlyle and John Campione respectively.

From there we follow the duo through their tumultuous life, various hold-ups, jail stints, and, at least for Bonnie, contemplative periods.

Simultaneously the musical follows the parallel storyline of Buck (David Price), Clyde’s brother and partner in crime and Blanche (Sarah Elizabeth Smith), his wife, who could have stolen the show if Carlyle and Campione’s performances weren’t equally as strong.

The book is weak, but I was pleasantly surprised at the strength of the female characters in what I would have expected to be a story dominated by men.

Bonnie and Blanche actually snag the stronger of Frank Wildhorn and Don Black’s songs and have characters that are far more nuanced and developed (although, it is still a musical, so don’t expect too much) than those of their male counterparts, a rare thing in musical theater and something perhaps brought out even more under the direction of René Moreno.

Their duet “You Love Who You Love” was the recipient of quite a few ‘whoops’ on opening night and Bonnie’s “How’ Bout a Dance?” and “Dyin’ Ain’t so Bad” are the requisite hook-filled ballads for which Wildhorn is known. Carlyle and Smith’s flawless voices only make them better.

Campione, who has been rather inconsistent on Dallas-area stages recently, was the perfect Clyde Barrow, playing the part with an overarching sense of fun instead of melancholy. He’s addicted to his life of thuggery and thievery, but you can’t help but love him, and you can’t help but cheer for Campione and Carlyle whose on-stage chemistry was great fun to watch.

Wildhorn is the hero of populist musical lover’s around the world (critics have never liked him, so the musical’s panning upon reaching New York surprised no-one). He has penned the music to Jekyll & Hyde, The Scarlet Pimpernel and Dracula: The Musical, among others, and his music, in combination with Don Black’s lyrics for Bonnie & Clyde, deliver the requisite showstoppers. The church choir as ensemble was rather questionable, but the versatile authors did a great job with their bluesy, twangy numbers like Campione’s “Raise a Little Hell” and Smith’s “You’re Goin’ Back to Jail.”

At the end of the day, Bonnie & Clyde may not be Tony material, but Watertower Theatre’s cast will certainly have you fooled for two and a half hours.