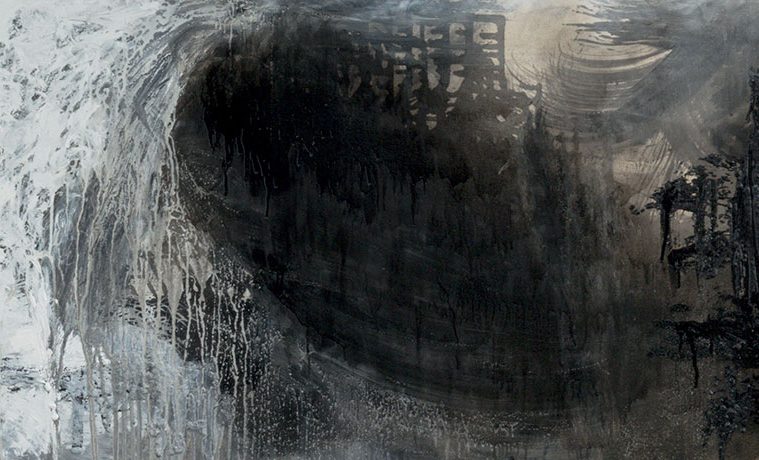 DALLAS—Currently at the Crow Collection of Asian Art in Dallas, in partnership with Titas performing arts group, seven paintings by the multi-talented Shen Wei are on exhibition.  Born in China in 1968 and known primarily as a contemporary dance choreographer based in New York, Shen founded his troupe in 2000 just five years after arriving to start a fellowship at the Nikolais/Louis dance lab. Initially trained in both dance and traditional Chinese calligraphy by his father, Shen has continued to explore and refine the relationship between the body in motion and the path traced by line drawing and the push and pull of paint on canvas.

The pieces in the Crow’s white box gallery are all untitled and relatively new paintings in oil and acrylic that investigate the possibilities of gesture in a grisaille black, white, and grey color scheme.  Shen focuses on the expressive texture of the medium by meditating on calligraphy, the body, and western painting, perhaps finding inspiration in Monet’s Impressionist Water Lilies (Nympheas, 1920-26, Musee de l’Orangerie), surrealism, and abstract expressionism.

The Crow exhibition catalog states that the pieces “have a dreamlike quality reminiscent of surrealist explorations of the unconscious that melds, unexpectedly, with visible brushstrokes and the traces of swift, decisive action.” This statement applies more, if not most, to the five darker paintings stretched on canvas than it does to the two far superior pieces tacked to the wall on un-stretched canvas which feature lighter cloudlike shapes on an otherwise white background.  Here, the images float effervescently with no hint of depth or ground distinctions and hints of light blue accent some portions of the heavily impastoed surface that proceeds laterally like a scroll.  In the mounted pieces there remains the suggestion of landscape with shapes that resemble mountains or the sea, as in a painting by Turner, stormy and chaotic.

In conjunction with the show, TITAS Presents hosted Shen Wei Dance Arts with a one evening performance at the Winspear Opera House.  The company performed within a week of the opening of the show, tying the pieces together with the live action of dancers on a stage.  This compels us to ask the question, what makes the pieces special and worthy of viewing and contemplating beyond formal comparisons to art historical sources?

The answer pivots on how the pieces say something about the connection between live performance and painting. They point out that something contemplative and private like the act of drawing becomes inverted and tied to temporality and the spatial relations of something more public like dance.  That relationship makes the work of Shen Wei equally mysterious and unique.