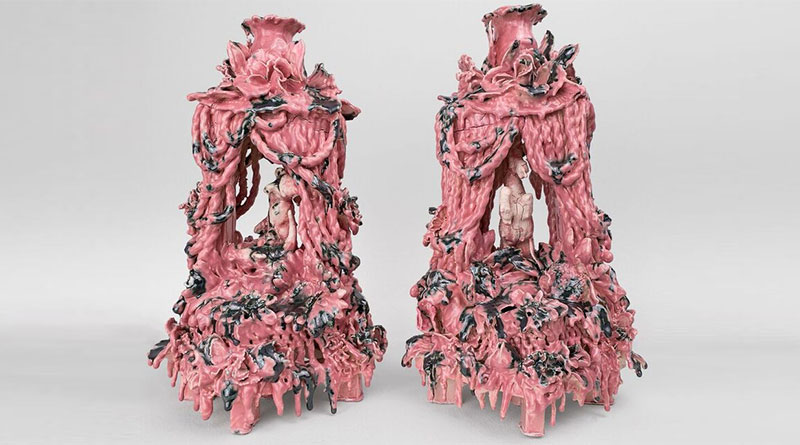 Anthony Sonnenberg is draped in black and gold fabrics, busily applying a shimmering upholstery fringe to his garment. The faintly sweet smell of hot glue clings to the air.  A work table strewn with tools and glittering detritus is the central hub around which his tapestried nude self-portraits and gloppily gorgeous ceramic sculptures reside. The sumptuous and playful energy that infuses these works is immediately evident in the cheerful chaos of his studio. Sonnenberg is deep into preparations for three upcoming shows: a solo show at Houston’s Art Palace (which he plans to transform from austere white cube to dimly lit Euro-classical gallery space from April 8 -May 14), Conduit Gallery’s booth at the Dallas Art Fair (April 14-17), and a performance/installation at Lawndale (May 6- June 11), all within a two-month period. And for his upcoming shows at least, the artist is using “established formulas and [taking] them to a new level.” He describes his current, feverish production mode as a process of “throwing it against the wall to see what sticks.”

Sonnenberg’s formula, established by his graduate work at the University of Washington, has been to explore the “line from enough to never enough.” His works are a heady blend of high and low, combining Rococo or Baroque sensibilities with craft techniques and thrift-store-harvested materials. “I put the sensual first,” Sonnenberg asserts. This tendency towards maximalism is especially evident in the ceramic works.  He really piles it on.  Found tchotchkes and clay feel fresh when coated with a unifying glaze. His most labor intensive is a gooey-looking chandelier. When asked if he’s ever gone too far (aesthetically) in a work, a faint smile plays on his face as he considers. “I don’t think so.”

And yet there is such a thing as going too far in terms of subject matter. For work that is so visceral and lusty in terms of surface, Sonnenberg stops short of blatant themes of sexuality. “As a gay man, I’ve been told I should put some of that into my work.”  Instead, he alludes to extremes such as terror, lust, and greed. “I grew up in a small town. In a small town, there is the surface conversation, and all of this other stuff boiling under the surface.” It’s this quality of reservation, even sweetness that makes the work so compelling. The line between artistic interest and life is poignantly real for Sonnenberg, who was diagnosed with diabetes this winter, a disease that has caused him to think about his dietary excesses more carefully. A tapestry on the wall depicts the nude artist-as-Dionysus, but his form, down to each tiny hair, is drawn with sparkling craft beads. The gravitational effects of bodily weight are echoed in the scalloped pattern of the fabric. As rigorously academic as the genesis of these works might be, there is a familiarity to their components, an insistence on handcraftedness that keeps the works personal. “I love the idea of the one of a kind,” he says in reference to a newly soldered crown prickling with crimped metal flowers and leaves.

Some might see this emphasis on decoration and beauty as a mask, a way of avoiding truth, but Sonnenberg has no illusions about the movements from which he draws aesthetic inspiration. Stilted, heavily stylized historical cultures such as the rococo or the antebellum south were as much about horrifically flawed social hierarchies as gorgeous excess. Sonnenberg is interested in “loving the beauty but waiting for the other shoe to drop.” That’s why a slight asymmetry, whether in the physical object or its conceptual components, is the ever-present driving force in these largely varied works. A studio-mate gave him some important advice: “You can’t edit and make at the same time.” He can wax poetic on Nietzsche’s Birth of Tragedy and the Apollonian and Dionysian angles in his self-portraiture, but as all good artists should, Sonnenberg realizes that “trying to be smart and have all the answers,” isn’t the way to churn out good art. For this artist, who turns thirty years old amid the tumult of his spring exhibition schedule, it’s a process of relaxing into the marrow-deep, earned intelligences of artistic instinct and taste.