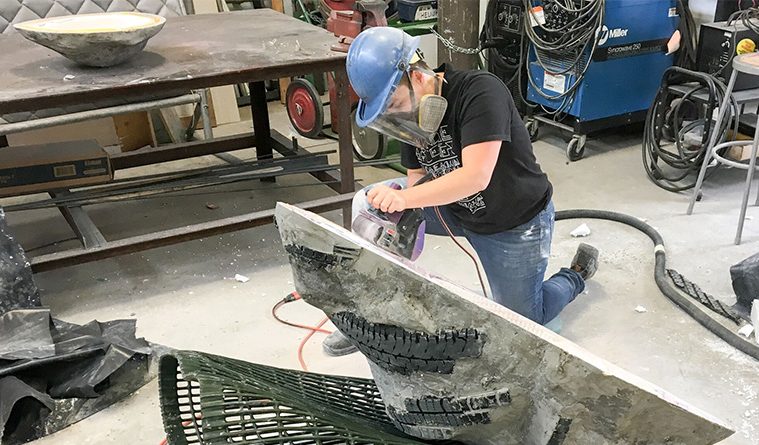 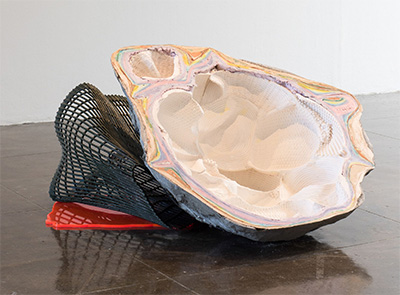 “I’m trying to shake up my practice,” Lily Cox-Richard says, as we stand in her installation-in-progress at Artpace. Three large bales of crushed copper sit on wooden pallets in the space, a small crane waiting nearby to move them onto the concrete plinths she is making. Her worktable is covered in papers and photographs, and a large rock—a “thunder egg”—she bought on a recent trip to Marfa sits on other project proposals. After Artpace, she goes to Guatemala City for a two-month residency, and in the spring she will be in residence at 100 W in Corsicana, Texas. She’s trying to get away from what she calls “project hangovers,” she says. “In the past, my work has been really project-based. Each work has a conclusion. I’m trying to get away from that, to have a practice that points the way to the next work, in a way that feels more organic.”

For her exhibition at Artpace, titled Salv., on view through Dec. 31, Cox-Richard thinks about landscape and how we value it, and she looks to entropy, history, natural resources, sustainability, and stewardship. It’s a potent mix, and one that she grounds in intuition rather than categorical statements or directives.

One entry point to the project is the unintentional discovery of an accident. While canoeing with her parents in Big Bend, Cox-Richard saw “this thing on a hill,” she remembers. “It just looked like this bizarre, shiny crushed can in the mountain.” Captivated by the sight, she started digging into local archives and the Marfa Courthouse records. She discovered that in the mid-1980s, an asphalt truck, on its way to pave part of the park and a private hangar, crashed and killed its two passengers. As it rolled down the hill, it spewed asphalt and triggered rock slides, eventually lodging itself into the landscape. “I started thinking about landscape,” Cox-Richard says, “about natural resources and questions of sustainability and value… Part of what I’ve been trying to figure out is what those relationships are. They feel instinctively really connected, but I’m trying to tease out those relationships between stewardship and landscape and West Texas… which all seems synecdochically related to certain ideals.”

Marfa is also an important reference for Salv. Exhibiting large copper bales in Texas, Cox-Richard notes, is a way of “driving an elbow into the conversation about Minimalism.” Indeed, much of Cox-Richard’s earlier work has offered new modes of engaging with histories of sculpture; for her exhibition The Stand (Possessing Powers) at Hirschl & Adler Gallery in New York, the Hudson River Museum, and University of Mary Washington in 2014-2015, Cox-Richard carved plaster replicas of Hiram Powers sculptures, but removed the figures from them. The sculptures then became about the supporting structures of each sculpture, a sophisticated take on the many kinds of things that can become invisible. Cox-Richard’s 2016 exhibition Stringer Lode at She Works Flexible in Houston also looked to the underpinning systems behind things. What is it, the exhibition asked, that supports and undergirds more conspicuous structures? 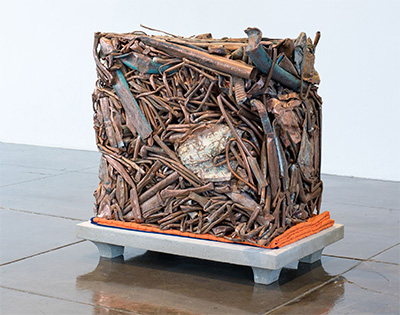 The copper bales, Cox-Richard tells me, have been a long and ongoing research project; one which took her to the Recycled Artist In Residency program (RAIR) in Philadelphia this past summer, and a trade convention in Florida for balers. “The scrap copper is wearing its history,” she says. “Some are pipes and cables, others are heating and cooling elements… They are specific to one place and one time, but then they are infinitely recyclable and can be melted down and made into something new.” There is, she says, a kind of “aggregated material history,” that can be seen in the bales. And, as a commodity, each bale is clearly valued based on laws of supply and demand; the markets fluctuate, and value changes with time. How do we account for these different kinds of value? she wonders.

In 1989, the mother of the passenger who died in the truck accident sued the asphalt company. “Looking at the court documents from that lawsuit, it was really striking to see the way that the court pinned a dollar amount on the loss of a relationship between the mother and son,” Cox-Richard adds. She’s been thinking, then, about where value is physically placed, and how it fluctuates.

Cox-Richard hiked down to the truck twice, navigating a tricky descent and snake-filled brush. “It was interesting to see how this truck became landscape,” she says. “If trash is more than 50 years old, it becomes historic litter… These [national parks] are our cathedrals. And there is this idea that 50 years is the threshold for something to be preserved as historic. It’s such a short turnaround…” The truck’s lifespan as it deteriorates, is taken over by nature, disappears and is forgotten could be an entry point for thinking about Robert Smithson’s discussion of entropy and monuments in the mid-1960s. “I’ve been thinking about this truck that didn’t mean to end up on the side of a mountain that has a different kind of history, that can kind of become a monument, but it’s not necessarily a monument for the people who died in it,” Cox-Richard says. She has titled her exhibition Salv. and she describes the made-up word as a hybrid, somewhere between salve and salvation, a balm for another kind of entropy that she observes in this election year. 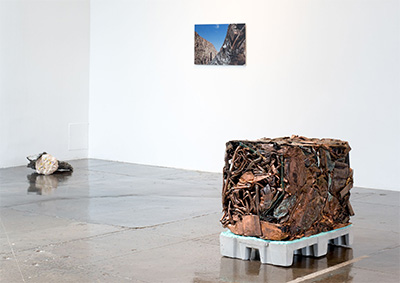 “In this political climate, it’s a really scary time to think about entropy abstractly,” she says. “There are things that have been unleashed in political discourse that cannot be unsaid, and we’re going to be dealing with the ramifications of that for a long time. The normalization of open bigotry…” she pauses, “That asphalt is not going back in that tank.”

As she shakes up her practice, as she draws a wedge into certain ways of aestheticizing the radical possibilities of minimalist sculpture, Cox-Richard looks for another direction, a healing potentiality. “This has made me feel really critical about the aestheticization of entropy,” she says, “or the way a controlled experiment that becomes a sculpture isn’t actually making visible that power; instead, it’s kind of making it polite. I’m trying to figure out another option.”