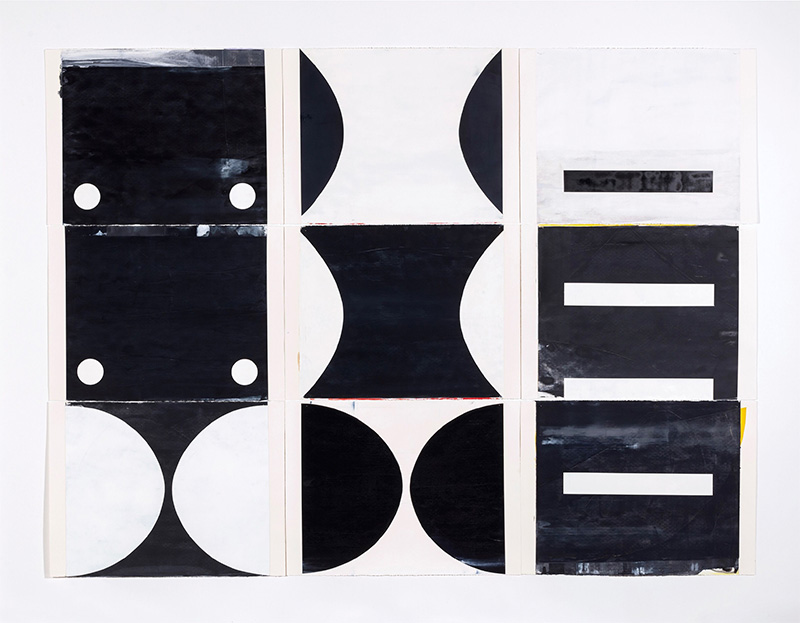 “I’ve tried to make an intentional shift in the work in the past few years,” Marcelyn McNeil tells me, recently. When we talk, her exhibition of new paintings, Slow Eddy, is about to open at Conduit Gallery (Oct. 19-Nov. 23). She’s recently returned to Dallas, after spending some time in her hometown of Wichita; this will be her first exhibition in Dallas since she moved there from Houston in the fall of 2018, and her fourth at Conduit.

“For several years, I was painting inanimate forms to a degree,” she says. “There was a little bit of humor and some intentional clunkiness.” But in recent years, her feelings toward paintings changed. “It feels so frivolous, almost silly, to be painting.” To make painting relevant for herself again, she found herself revising how she worked. She switched to raw canvas and began pouring paint, using the paint almost like a stain, and stitching pieces of canvas together. In these new works, the canvas shows through in geometric and undulating arrangements, with gradations of color and thinned out layers of paint giving her forms a new kind of rhythmic softness. 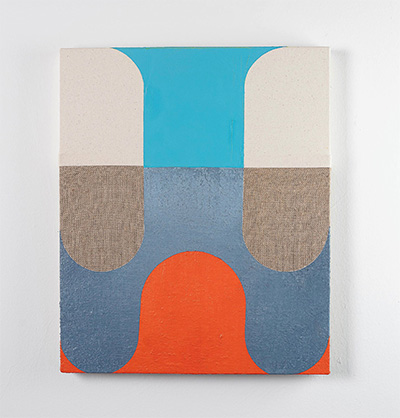 “I was trying to reeducate myself, learn new things about painting and change my materials,” she says. “I want to move away from this whole biomorphic animated humor in my work. I wanted the paint to be more sensual, softer, more quiet.” With the translucence of pouring paint, she found, the works quiet down. She describes the process as meditative, more open to chance.

McNeil’s relationship to painting has never been a given. While studying for her MFA at the University of Illinois, Chicago, she was drawn to more political and idea-based work and found influences in the work of David Hammons and Gabriel Orozco. She recalls a painting teacher who told her to get out of painting, that she was terrible at it. “It was so difficult for me; there was something that I was thrilled about, with it being so hard.” It took years, she says, before she understood herself to be a painter.

Slow Eddy is titled for the watery experience of the pour and the stain. “There are always organic forms in my work—always these orbs and globes—but I’m trying to move away from references to the body—not that I was overtly trying to do that before.”

This method of working began last year, before her work was shown at Lawndale Art Center in Houston. “When I first started the paintings that were at Lawndale, those came about all because I was thinking about gravity-fed pours and ramps and the incline. I tried to make the actual substrate meaningful to the surface and to unify them in some way,” McNeil says. “Pouring is more chance driven. It’s about viscosity of materials. I thought I could get to a more meditative space and interrupt the graphic, hard-edge stuff I do.” 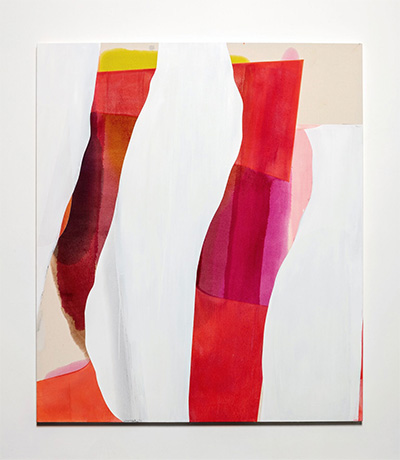 Instead of mixing paint, the pouring allows the colors to appear through the process. “This way I actually find the color as I’m painting through multiple layers of translucency. You don’t ever know how the color is going to end up, what happens when orange and green translucent colors pass over each other, for example,” she says. “There’s a lot of learning that’s on display in the show.”

In Kansas this past year, McNeil rented an industrial space as her studio and spent her days there, from 8 to 5. “That’s where I started reevaluating what I was doing,” she says. She had no technology in the studio, no internet, and no outside interruptions. She describes it as an isolated residency, a productive period of work, with very little feedback from the world beyond the studio. She can work almost anywhere, she tells me; it’s a kind of practice that is not place-specific, and her painting is able to move as she needs to. She cites the landscape of the Great Plains as an important space for her, with its long horizons and the always-present flatness of distance. “I always want a lot of space around me while I’m working—I do think it’s about growing up in that kind of expanse.”

As we talk, we share connections to other painters that interest us. She’s been looking again at Vija Celmins’ work recently and at paintings by Jacqueline Humphries. We talk a bit about Gerd Lefeurt and Armando Reverón, and the ways they handled paint and its shimmering translucence and layers.

“How do we engage people with painting, still?” she wonders. “I would like to believe that there’s still something about making, about putting a lot of time and care and intimacy into the practice of making something, and that materials and forms still have something they can say to us.”