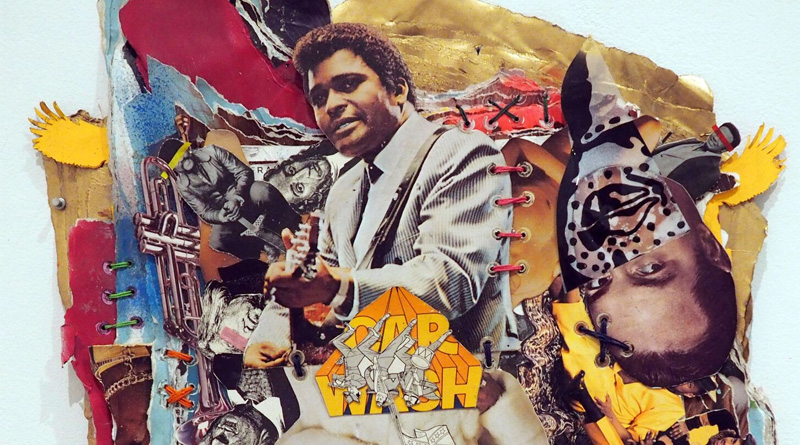 Robert Hodge, I can change the color on your mood ring, 2017.
Mixed Media Collage, 28″ x 28″.
Photo courtesy of Artpace and the artist.

“The music has always been there, lingering in my presence,” said Robert Hodge, a Houston-based artist.  Artist in this sense isn’t limited to a solitary field, though: Hodge is a visual artist, a musician, a producer, and a creative entrepreneur. Recently on view as part of Friendly Fire at the Station Museum of Contemporary Art, Hodge recreated his studio, blown out across a wall. The central point of this installation was Hodge’s piano. Studio visits and interviews with the artist always seem to involve music in some capacity, whether playing something from his collection or an album he produced. Over the past few years, it has played an even more significant role in his visual practice.

Hodge’s artistic practice wasn’t always such a nexus of his interests, though. “For a long time, I tried to do them separately, while respecting the dedication and sacrifice each of the practices takes,” he said. It wasn’t until recently that he began to incorporate music into his practice. “I wanted to create a soundtrack for the moment.”

Early iterations and attempts at this could be seen in Hodge’s 2014 solo exhibition Robert Hodge: Destroy and Rebuild at the Contemporary Arts Museum Houston, in which Hodge put representations of black people in direct confrontation with one another. Contemporary hip-hop lyrics were cut into various materials and lain over representations from the 18th, 19th and early 20th century. Together they interlaced destruction and recuperation, highlighting the rebuilt value born from tearing down misconceived notions of the past.

These ideas of memory and commemoration have remained at play in Hodge’s work ever since. In recent years, had was the executive producer of the album “Two and 1⁄2 years: A Musical Celebration to the Spirit of Juneteenth,” which he worked on with Houston-based artist Tierney Malone. The album includes 47 musicians from Houston and beyond, including Jason Moran, Robert Glasper, Outspoken Bean, and more. Together they tell the story of the end of slavery in Texas. “This partnership of practices allows neither one to take the background, but equally explores and connects the music and the visual,” he stated.

This spring Hodge has been an artist-in-residence at Artpace in San Antonio, where he’s been continuing to combine these practices. “As part of my Artpace residency,” he said, “I am interested in creating a dynamic project that incorporates my love for the musical and visual arts and reflects an important and often overlooked aspect of San Antonio’s history.” On view as part of the organization’s Spring 2017 IAIR exhibition through May 7, Hodge will present Between the Devil and the Deep.

In the exhibition, Hodge examines the concept of the devil and the connection between talent and the supernatural. Specifically, he taps into the rumors behind Robert Johnson, who was said to have sold his soul to the devil at a Mississippi crossroads. For a time in late 1936, Johnson had set up a makeshift recording space in a room at San Antonio’s Gunter Hotel. He finished recording in Dallas, but 11 of the 16 songs on King of the Delta Blues Singers originate from that San Antonio hotel room. Not even a year after wrapping up in Dallas, Johnson was poisoned by his girlfriend, dying at the age of 28. Hodge sums up Johnson’s rise and fall by citing the back of the vinyl sleeve of the album: “Robert Johnson appeared and disappeared, in much the same fashion as a sheet of newspaper twisting and twirling down a dark and windy midnight street.”

Johnson’s impact and importance were not lost on the music world, nor are they lost on Robert Hodge. His representation of Johnson, much like his own artistic practice, is multifaceted. Accompanying the exhibition of paintings and prints studying the misconception that skill and hard work are somehow related to the supernatural, he began working on an album, an exclusive release on vinyl. Hodge has been at work with a group of contemporary artists, recreating and re-imagining the songs of Robert Johnson “maintaining the 1930s Delta blues feel while expanding upon the music to connect with younger generations.”

Hodge reiterates the connection between visual art and music within his work. “I’m considering as many senses as I can to give the viewer, and the most realistic for me is the audio and visual. They seem to activate the other senses.” Through his dedication to both crafts, Hodge exemplifies the will and perseverance that births talent. Had he been born of a different generation, perhaps rumors would have spread that he, too, had sold his soul to the devil somewhere in the crossroads of Third Ward.