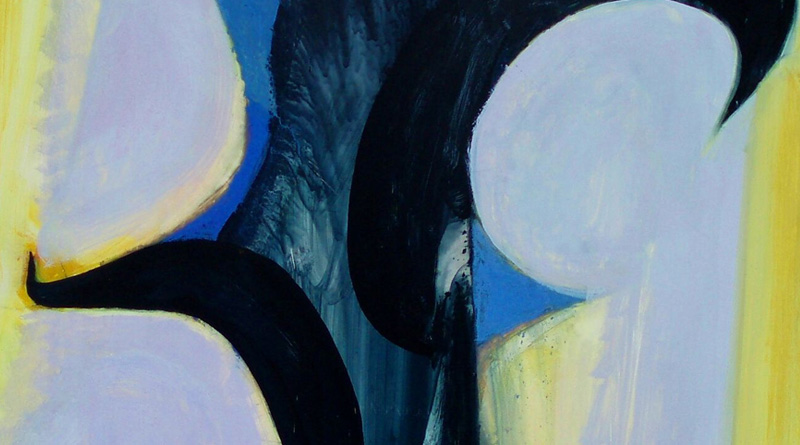 Roberto Munguia, This Perfect Something, (Detail) 2007, gouache on panel.
All images courtesy the artist.

His heart gave out after a non-stop year of exhibitions and new paintings, in addition to his full-time job teaching art at Cistercian Abbey and Preparatory School, not to mention family and life commitments. Then, in a moment of peace after celebrating the holidays with his family, his entire left side seized up: a massive heart attack.

“This past year I’ve been very aware of enjoying life, really savoring these little moments and people and times, while they’re happening,” Munguia says, quick to note how lucky he was that someone was present to call an ambulance. “It’s often like, look at how wonderful this is right here, right now.”

Munguia’s life as an artist has been guided by a hyper-awareness. His attention to color, to visual language, and his faith in the process of creation has taken his work down multi-varied paths working with inks, oils, acrylics, encaustic, clays and even text. The myriad results of the last four decades take the walls of the Latino Cultural Center (LCC) in a retrospective Roberto Munguia: Buscador/Descubridor, through April 1.

For Munguia, everything bears significance. The rack cards, he notes, feature his 2008 painting, Death, an image of a blue skull. A memento mori, appropriate to any artistic reflection on a career, now imbued with a knowing urgency. Or perhaps, a reminder to loosen grip — to get lost in pursuit of a trajectory. Munguia, the buscador, the seeker; Munguia, the descubridor, the discoverer. He’s learned, and is still learning, to let go of any notions of control, in art and life.

From the beginning of his career, Munguia pursued individuality. Raised in a family that supported both his and his brother’s artistic pursuits, he was both a cellist and a visual artist. On the cusp of adulthood both seemed viable options, but Munguia didn’t want to dedicate his life to someone else’s music, so he chose to study art to see where his own perspective would take him.

“That early instinct to grow and to discover has remained very important to me as an artist,” says Munguia. “I was never an artist who was going to latch onto a style and ride it until it was dead to get giant chunks of money just didn’t appeal to me at all.”

Munguia’s work may not have have international commercial appeal, but he has earned a following in Dallas, thanks to Conduit Gallery, where he has shown for two decades. Many of the pieces in the exhibition at the LCC are from private collections. His collectors can tell you, no two Munguia pieces are alike.

During his early career, Munguia describes himself as a control freak. His work, primarily abstract, was rich with intention. He remembers a time returning to his studio where a small black mark had been added to a piece. That rigidity of process seems hardly recognizable now. Now, much of his work is out of his control. He creates color concoctions combining paints with various other materials, allowing them to sit and spoil and smell until he can move them on Yupo paper or Dibond to create paintings that seem to contain entire worlds. Even the way he explains these paintings is riddled with mystique. “I never know what they’re going to do,” says Munguia. “You build and seasons pass, and you see the work changing. It’s the passage of time; it’s a wonderful thing.”

The release of control in both his work and his life began in the early 80’s for Munguia. He had spent the 70’s practicing Hinduism. He taught yoga and meditation, actively following the religion’s path to better personhood. In 1983, he had what he describes as a “bam! over the head” conversion to Christianity — a religion based on the forgiveness and grace of God.

For a period following his conversion, he began to explore figurative work. He made big, allegorical oil paintings based on Adam and Eve in the garden, playing with light and shadows. As always, he kept searching, and several years later his work shifted again.

“I decided I didn’t like painting shadows. I was creating layers and layers of not being here, not being present,” says Munguia. “I needed to approach my work in a new way. I’m just not going to commit to a style for that sake.”

Throughout his work and his life, it’s clear that Munguia remains on the hunt for the truth with a capital T. Perhaps it will turn out that the truth is the search itself.

One of the earlier projects that Munguia found himself returning to in the days leading up to his heart attack was a conceptual piece titled, The Now Waits Only for Perhaps. Inspired by philosophy, Jenny Holzer aphorisms and Yoko Ono’s book of instructions, Grapefruit, he crafted 200-plus one-liners, some of which ended up in real fortune cookies. One he repeated several times during our chat was “The perspective of years is worth the insomnia.” Another? “You will not die today.”