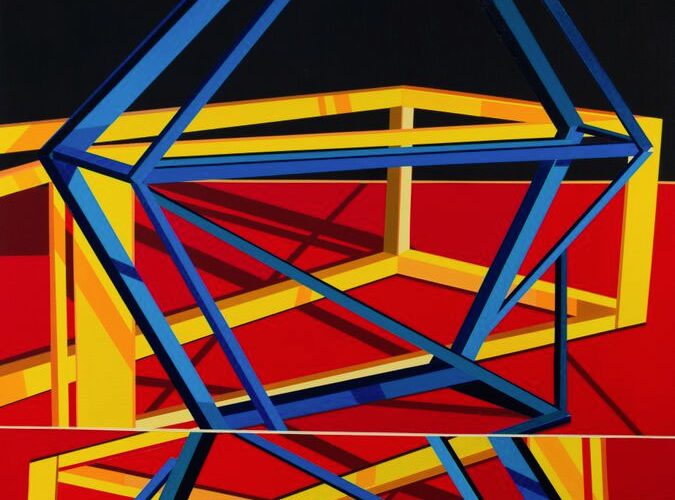 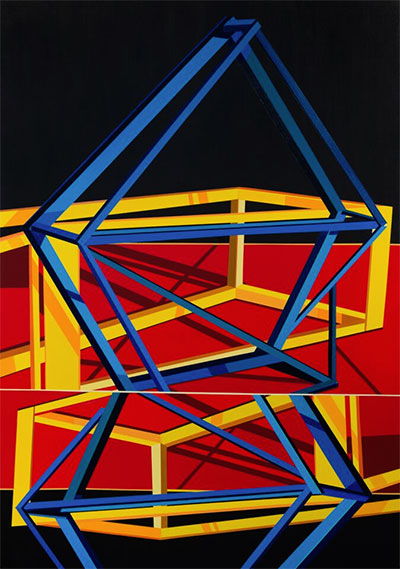 There’s a scene in Kurt Vonnegut’s famous apocalyptic satire Cat’s Cradle in which the inventor of the atomic bomb plays the string game of the same name at his home in upstate New York just as his brutal creation is unleashed upon the world.  It’s not quite Nero fiddling; the only madness in this story is a genius’ ambivalence to the consequences of his atomic tinkerings, but it is evidence of the depravity of certain creative people when their intellectual interests trump their humanity.  In consideration of these (and many other) ideas, artist Tommy Fitzpatrick has titled his upcoming exhibition of new paintings at Inman Gallery Cat’s Cradle. Two of the artist’s acrylic paintings were also featured at this year’s Houston Fine Arts Fair.

On view from October 30th through January 2, each individual painting is titled with an iteration of the classic string game. Fitzpatrick’s self-awareness as an artist and more specifically as a painter colored our conversation about his works and the paintings themselves with a healthy mixture of precision and self-deprecation. For instance, he almost breathlessly described a desire for “photographic fidelity and color field intensity” and then tossed it off with, “but that sounds obnoxious.” 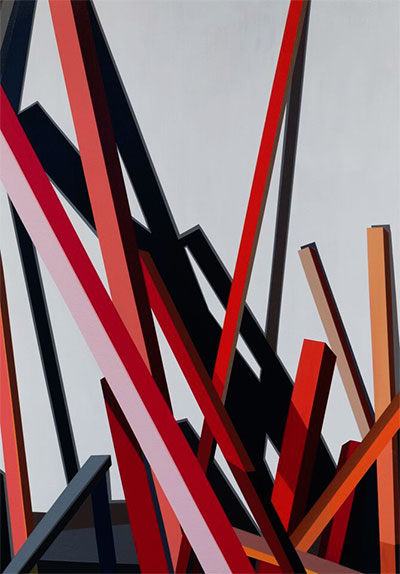 Fitzpatrick’s visual language is a sophisticated hybrid of abstraction and photorealism.  A previous body of work used tightly cropped photographs of architecture as a direct reference:  Specifically, the jutting planes of  “Herzog de Meuron, or Arata Isozaki and his unbuilt architecture.”

Fitzpatrick’s especially interested in the intersection between painting and architecture.  “If there’s no roof, there’s no painting,” he quips. But, he admits, “I couldn’t get it abstract enough… About four years ago, I started making sculptures, but I don’t show the sculptures.”

Instead, the artist uses them as a temporary proposal of sorts, arranging and rearranging parts so that the elements create their own dimensional forms.  They’re not wedded to functionality like architecture, but they do have to obey the laws of physics.  His sculptures have actual weight, they must balance, and they cast shadows—all of which inform the compositions. A major question the artist asked of himself was, “How can you reintroduce illusionism back into abstraction?”

For now, the solution is a complicated multi-step process of sculpting and photographing before anything makes it to a canvas. 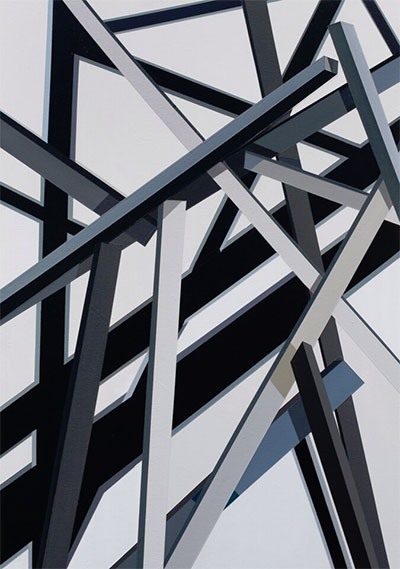 “I take thousands of photographs.”  When a painting is in process, Fitzpatrick tries to “avoid local color.  Color is nonobjective.”  He can dial up or down the saturation of a hue as it suits the painting.  The resultant palette seems to edge toward high contrast: glowing white against black backgrounds in some of the older pieces, or a jolt of ketchup red against various mustard shades as in Jacob’s Ladder.  “The shadow information stays,” however, underlining the physicality of the structure being depicted.  And lately, the artist has begun slicing the photos that act as his source material, “re-collaging, up to three different points of view [of the same sculpture.]”  Five Pointed Star takes this approach, with three equal segments that feature part of a whole.  It’s like opening and closing the blinds on an object in motion.

This new interest in carving up photos further fragments the surface of the painting, but seems very much in line with the idea of painting as a “string game” of sorts- a momentary construction that serves as an emblem of the fragility of creation and the terrifying ease of destruction.  Even if abstraction is a game, that doesn’t mean it can’t tell us plenty about the actual world.