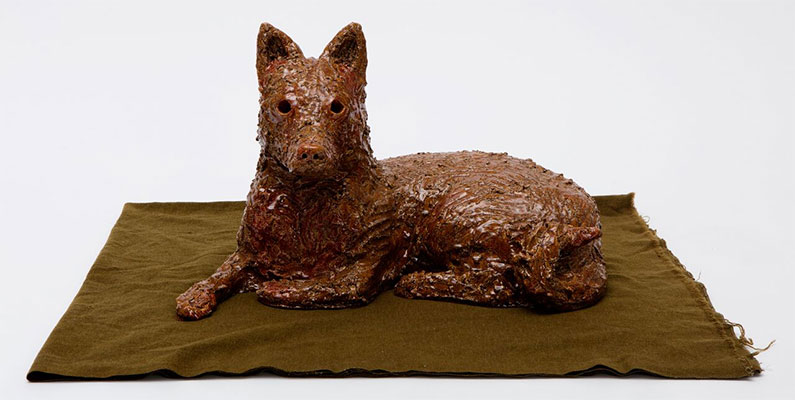 Mai-Thu Perret at the Nasher

The downstairs gallery space at the Nasher Sculpture Center has been transformed into a kind of theatrical stage, obliging visitors to take part in the action by walking through an art installation contemplating the mise-en-scene.  Figures inside the glass-encased gallery are shrouded and blurred by a layer of wavy petroleum smeared over the central and topmost windows resembling Gerhard Richter paintings of objects and people.  No mere contrivance, this mechanism acts as both an examination and a critique of modernist tropes and a visual stop-gap preventing viewers from seeing the installation on the way down the stairs; it invites them closer and eventually into the space to satisfy their curiosity.  The brainchild of Swiss performance and visual artist Mai-Thu Perret, the installation puts forth a collage of objects drawn from her visual vocabulary that includes several female mannequins, two large-scale ceramic eyes, a ceramic dog, and an abstract Rorschach-style painting that hangs on the back wall.

In the past, Perret has used mannequins in performance pieces that borrow from Japanese Bunraku, where the puppeteer stands beside or behind the puppet, remaining visible to the audience.  That work was informed by her creation of a fictional feminist art commune called The Crystal Frontier, an autonomous and utopian collective based in the New Mexico desert.  Where her prior performances and art works explored the female body and how the dual nature of the live performer, in contrast with the inert figure, leads to shifting positions of human agency between the two, this installation is informed by an existing utopian society operating now in the dessert of Kurdish Syria, comprised of women who form defensive militias (known as Y.P.J. or Female Protection Units) responsible for defending their territory from ISIS and other hostile rebel forces within the failed state.

In the exhibition, the mannequins give one an uncanny feeling as one moves through an immersive spectacle; being life-sized, they seem like actual people when viewed through the corner of the eye. Even more perplexing: When several visitors are in the gallery interacting with the mannequins at the same time, it’s easy to confuse the mannequins and the people.  This strangeness is compounded by the enormous eye sculptures sitting on the floor staring upwards, along with the reference to psychoanalysis in the Rorschach painting it screams “surrealism.”  The figures are composed of various media, clad in military garb, and casually wield machine guns painted in Day-Glo colors, cast from pellet guns so that they look like children’s toys.

The mannequins resemble people through their formal human shape and natural, non-threatening, poses.  Otherwise, they are each different and unique figures with skin composed of papier-maché, woven wicker, or ceramics, also in varying colors.  This deconstruction of the body surface comes directly from the Dada movement and finds precedents in several photomontage artists, particularly Hannah Hoch, in whose work the body is destroyed and reconfigured with objects, images of animals, or human body parts taken out of scale.  Where Hoch used these techniques during her time as a critique of gender issues and politics, Perret infuses modernist tropes into the martial notion of the female warriors in order to distill the violence to a minimum and privilege the collective desire for a space of peaceful existence where they, and all of us, might do without guns and violence.  Perhaps her message is that precisely due to our 21st-century situation, we’ve forgotten how to do without them, suggesting an imperative to imagine an end to the chaos and to make peace real again.  Maybe peaceful coexistence in a world devoid of barbarity is a newly-minted surrealist proposition?  Come to think of it, in 1916 the Dadaists began as anti-war conscientious objectors.