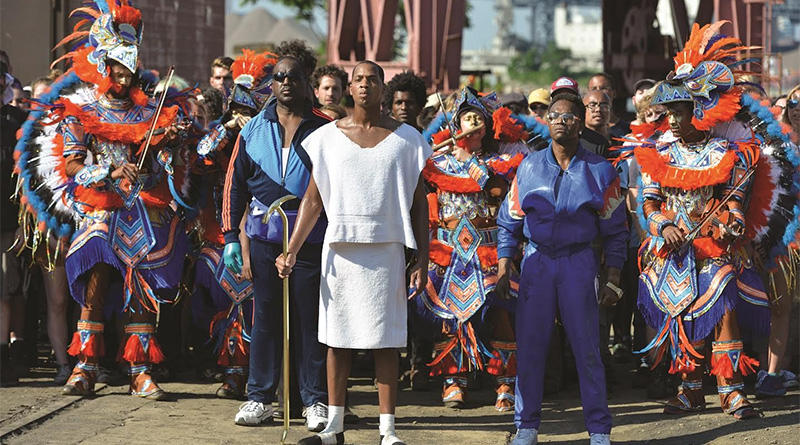 Six Straight Hours of River of Fundament at MFAH

The Museum of Fine Arts, Houston, in partnership with the Contemporary Arts Museum Houston, screened River of Fundament on Sept.16-18, 2016. Photos courtesy of MFAH. 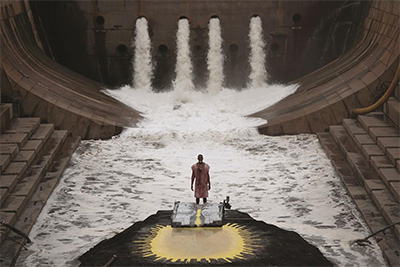 It is and is almost many things. Unless indicated otherwise, all quotes are from the film’s website synopsis, which I am putting in the mouth of Barney, since he seems to be the face of the river of crap “brand.” What’s important is that it claims to be an opera, that there are three live acts that occurred in the real world and were filmed, that it is six hours long, and that I sat there and watched it in one sitting.

Fundament had its inception when Norman Mailer, who was featured in Barney’s Cremaster Cycle, handed Barney a copy of his not-so-beloved novel, Ancient Evenings, a book Mailer labored over for years, which he considered to be some of his best work.

In Harold Bloom’s review of the novel, he says, “I don’t intend to give an elaborate plot summary, since if you read Ancient Evenings for the story, you will hang yourself. There is a lot less story than any summary would indicate, because this is a book in which every conceivable outrage happens, and yet nothing happens, because at the end everything remains exactly the same.” Barney says the film is based just as much on Bloom’s review as the novel, which I have no idea what to do with.

Reading the synopsis of Barney’s “opera” is like reading a program at an opera in another language—it’s just a nice thing to flip through during intermissions. The plot is an incomprehensible mess, but the structure is simple. The film is divided into three acts, each around two hours, centered on footage from one of the three filmed in real life performances, “Ren,” “Khu” and “Ba,” which are logistical feats and an accomplishment in their own right, whether or not the film adds up to anything.

The music is very, very good. Bepler’s score blends recorded music, the documented performances, live on screen musicians, ambient location sounds, an hour or two of Ligeti’s Requiem-esque Eeeeeehhh Ahhhh Oooooh’ing, and songs by popular singers like Belita Woods (Parliment Funkadelic). Five bags of popcorn to the sound designer, who sat beside Bepler (who gets four bags of popcorn), and mixed six hours of it. It’s aurally coherent, which is an accomplishment in itself.

The movie came out two years ago, so you can probably watch it on DVD or Amazon and fast forward to Act III to watch the duet between an adolescent girls’ step team and Milford Graves. It’s unbelievably good. Also the jazz band at the party. British vocal improviser Phil Minton (known for moaning) (credited as “Singing Wake Guest” on IMDB) kills it and probably out acts all the “popular respected actors” like Paul Giamatti (does he even act anymore or just say things in Paul Giamatti voice?) and Elaine Stritch.

In this “opera” there are a few incredible moments of opera, and it’s these incredible moments of opera that make the rest of it seem so limp and aimless. If it’s opera, it’s an opera that’s mostly just transitions and recitative, which could be great in the right hands, but the parts where any of the plot actually happens feel like watching a Baz Lurhmann production of Wagner. Speaking of Wagner, his opera Die Meistersinger von Nürnberg, one of longest operas that gets regularly performed, longer than any of the parts of the Ring Cycle, runs 260 minutes or so. Fundament clocks in at 332 minutes. I’m just sayin’. 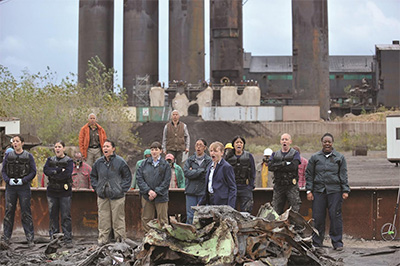 The arias, in which central characters take the moment to really sing about what’s going on, are actually all really good. If he wanted to go overboard and really stuff things in other things, which he obviously does, he should have stuffed the colostomy bag with arias. It would have helped. It could have been a really good opera! Which is why it’s frustrating. Less crappy half-in-tune recitativo, more arias. “Bands” come on stage to sing songs, but they don’t really feel like arias, they feel like music videos— the whole film teeters on the edge of lapsing into “music video,” which is probably what Barney should have made in the first place, only because some moments shine so brightly while the other moments seem so incredibly dull.

Although it did not make me want to hang myself, the plot, acting, script, dialog, writing, or messy hodgepodge of all the above, is garbage. With the exception of a few moments during the wake in Act I, Phil Minton’s moaning, and the acting by Ellen Burstyn at the end of the film, I felt like I was watching a high school theater class try to do Antigone. But that’s the danger of setting anything “ancient” in modern times. It’s a hard thing to do! But I wonder and cannot figure out how or why Burstyn was the only actor who could deliver any of the dialog and make it believable. Five bags of popcorn to her!

The “dialog,” a cut and paste collage of “profound” crap from Mailer’s novel, The Book of the Dead, and texts by Whitman, Emerson, and Burroughs, slips in and out of strange and out of tune recitative — not out of tune in a good “avant-garde” strange, out of tune way, but more like a middle school musical way, which makes it seem unsure of itself. Like the arias, the handful of brilliant moments of recitative (the good moments of recitative are so good!), just make the rest of it seem so flaccid. Twin opera actors Eugene and Herbert Perry nobly carry most of the operatic dead weight, so they both get five bags of popcorn.

I have my problems with the film, but my problem with my problems about the film is that it’s so well put together. The camera work is so good. The scene in which a car gets smelted in a Detroit steel plant is insane— very beautiful, much terrifying. The editing is so slick I kept forgetting I’d been sitting all day. Floating down PooPoo River at the pace of a music video, the time just flies by. Barney hands you a wonderful image every three-five seconds, nothing looks “crappy.” Even the opening scene of Barney covered in crap getting penetrated by the “colostomy bag dude,” who is also covered in crap, looks good. Despite any attempt to be shocking, which I believe Barney wants to be, the film is pretty watchable! Barney is saying thank you for putting up with my crap (but what if the crap was not the excrement and was really the bad acting all along, and the bad acting is the actual river of crap and Barney is just that deep to double troll us on levels of crap depth? That would be genius.), look here at this shiny object. Barney is good at shiny objects. He’s a sculptor, and he identifies as a sculptor, and when he says “story,” it goes in quotes- everything goes in quotes – because he understands “story” as a sculptor. He’s speaking in a sculptor’s dialect, and so he is writing in a sculptor’s dialect while believing he’s speaking writer. “Sculpture is generated with each transformation of the automobile. The recurring motif of a graduated ascent to power is articulated in the material language of the metals and minerals that take form in sculpture. Base elements — zinc, sulfur, iron, copper — give way to yellow metal alloys — bronze and brass — that emulate, but fail to reproduce, the quality of gold.”

Barney knows his materials, and his craft. He knows how he’s doing. The e-flux blurb is ready. But when he (or it, I am placing the language on him, maybe falsely. No, it is him!) says it uses the “language of modern industrial processing and recycling to tell the story of its automobile protagonist,” I think it’s the opposite. The “story of its automobile protagonist” is an arbitrary device used to show off Barney’s visual sculptural language, which is a finely executed commentary on modern industrial processing. He’s a capital A Artist! ( The film often showed with exhibition’s of “85 works inspired by or made in conjunction with the film, including large-scale sculptures weighing up to 25 tons.” ) He’s not a writer, he’s an Artist, and he’s got that crap down. Five bags for Barney’s performance destroying cars.

One advantage of doing a bunch of crap in one sitting, in this case sitting in front of a few hours of crap coming out of buttholes, is that I got quickly desensitized to all the poop and buttholes and poop coming out of buttholes and poop going in buttholes. I had the opportunity to get tired instead of shocked when a new tube is put in someone’s butt to funnel this or that fluid in or out of this or that orifice. These scenes, for the most part, are things we’ve seen at performance art events and giggled at, having to leave the room because “LOL, they’re peeing in a wine glass and smoking a cigarettes, are they serious? JFC, I need to go outside.” Maybe I’m being trolled, but I think Barney is serious about this crap.

As I floated down the river of Symbols (capital S for capital P Profundity), watching the symbols come and go as they abandon and take on narrative and metaphorical significance, it all started to feel pretty arbitrary. But it sure does look and sound cool!

So it’s some good crap, some bad crap, some okay crap, a long crap, and mostly frustrating crap because the crap had the potential to be really good crap. It’s just a lot of crap to sort through. There’s a reason we call a garage full of assorted items “our crap.” I know if I’m going to clean out all the crap in my garage, I should probably set aside at least six hours, because there’s just so much crap in there that I thought I needed. Why did I get that crap in the first place? And crap, I could have handled this crap over time piece by piece like people say that I should, but I decided to take on all the crap on at once, because that’s my impulse of avoidance when it comes to dealing with crap. Barney is right, there is so much crap.

River of Fundament ends with a series of beautiful, meditative nature shots. Congratulations, you survived the butt holes and bad acting, here’s five minutes of some spectacular Planet-Earth-looking trees! We see the salmon! We see the circle of its life, which of course ends in death. Yes, life! and death! And in between we have to put up with a lot of shit, but that’s not news to anyone. On a scale of one to five colostomy bags, I give it between two and three colostomy bags.