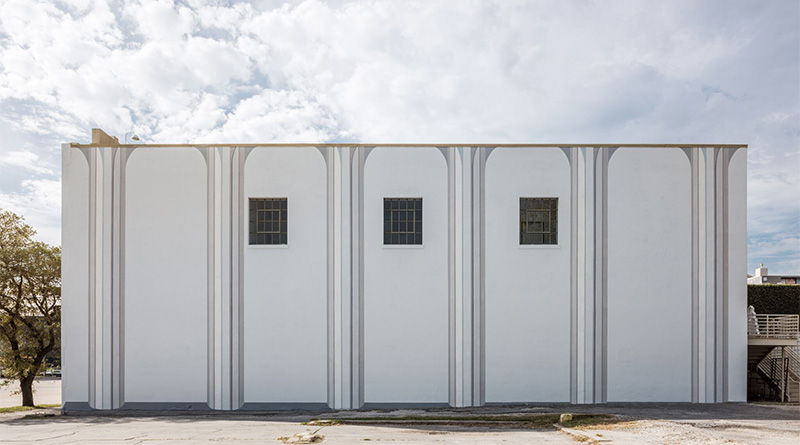 Francesca Fuchs has taken on the largest canvas thus far in her career, the north wall of the Lawndale Art Center with her mural, sensibly titled, North Exterior Wall, on view through October 2018. Although the work is a clear departure from her dreamy memory paintings, the piece exudes that smart elegance often present in her work. Subtle, sly and rich with visual wit, Fuchs’s mural is a welcome addition to the Museum District neighborhood. Fuchs visited with A + C editor Nancy Wozny about the project.

What drew you to the idea of creating a mural?

Lawndale’s north wall has been an exciting project since it started, as the impermanent nature of temporary wall paintings gives it poignancy. I have enjoyed the different iterations on the wall from Daniel Anguilu, Aaron Parazette, Otabenga Jones to Russell Etchen. I considered proposing off and on because the scale is a daunting challenge and the question of how you treat the wall – as a canvas surface or as part of the building – is intriguing.

What are the gifts of this large scale that are quite different than painting?

It is huge and visible at all times. If the piece doesn’t work, it fails on an epic scale for an entire year. That sets a new bar. The downside is that in the conceptualization you may have to play it a little safer than in the world of painting in the studio where you can paint over and start again. You have to try to make something this large work on the first pass. A show of paintings can also fail large, but at least it is over after a month.

How true! Talk about addressing a building vs. a canvas.

I knew from the beginning that I wanted to engage in a dialogue with the entire building rather than treat the wall as a canvas. Even though I paint, I trained as a sculptor and during graduate school made several interventions in structures that examined the relationship of inside vs. outside and flat vs. dimensional. I have always been a fan of Richard Artschwager’s weird painting objects. But the minute I thought about proposing, I wanted a piece that had a conversation with Lawndale’s iconic front Art-Deco facade.

In your talk you mentioned a 17th century Dutch painter. Where do we see that influence in the piece?

I have loved the Dutch painter Saenredan (1597-1665) since I first saw his work at the National Gallery in London. He makes monumental small paintings. His paintings of church interiors achieve a spiritual yearning that are not due to the subject matter. His super-reduced palette makes slight color nuances sing. I want the north wall to hint at a Gothic church interior which is in conversation with the real windows on its wall and the Art Deco facade around the corner.

The palette of beige, soft whites, and grays feels dreamy yet practical. How did you arrive at this collection of tones and know that it would work so well outdoors?

After making drawings and models and life size sketches of the line widths, I spent additional weeks of preparation mixing color so that each hue would work correctly in relation to its neighbors. I painted the colors on large pieces of Tyvek and then took them outside to see if they were creating the subtle sense of light I wanted. For example, the stripe that feels warm is only a little more yellow white than the wide stripe over, which is bluish-white. Working this large also made me realize that I can pump the color to be more saturated – one stripe is actually a light blue and one a red violet.

Well then, I need to go back and see the blue and red violet. How does the Lawndale building’s iconic Art Deco façade factor into the piece?

Art Deco was into façades and often created decorative columns in shallow relief. These columns play a similar game of flat vs. dimensional that I am interested in. Art Deco lands heavily on the side of graphic ornamentation that maybe took us to 1970s supergraphics. The stripes can be read as a minimal stripe compositions as well as columns.

You mentioned that you were playing with trompe l’oeil ideas, but not entirely. Can you talk more about that push and pull?

I love the little squares or series of three lines that are template painted on freeway overpasses to suggest decorative detailing in the concrete that is not in fact there (the I-10 overpass on Studewood is an example). I could have gone full-out to make the stripes read as dimensional columns but I wanted to hold them in the space where they are both dimensional and flatten out.

What really intrigued me is how the columns are situated on the wall, which gives this kind of ongoing feeling, because they are not centered on the space. The windows, which I have never noticed before, seem rather mysteriously placed. Can you talk about those choices?

The window placement was key. It was clear from the first sketches that centering them in the arches was really boring. And also that centering the arches on the side wall would make too neat a trick solution of this side vs. that side. By starting the columns mid-arch and spacing them unevenly there is an implied continuation past the physical end of the wall. The windows create a tense dynamic of being situated, but also floating – part of it, but refusing to submit entirely.

That’s exactly what I was sensing about the windows. Very eerie, mysterious and fun. Let’s get to the actual making of the piece. I am always interested in the labor of art. What did it take to make the piece happen?

It took two of us working outside from nine to five for ten days, a monster cherry picker, harnesses, 10 buckets of exterior latex paint, 10 brushes, some templates and a giant chalk line, borrowed from Aaron Parazette, and amazing luck with the weather. I don’t normally work that hard physically. I was happy it got dark early as that made for a natural time to stop – I might have kept going otherwise. Part of the excitement in doing the project was also the dread feeling in the pit of my stomach when I realized the proposal had been selected – now I would actually have to execute it. 36 feet is pretty high up.

I can just imagine that moment when you realized that you would need to be painting from a great height. I am only sorry that I didn’t stop by to cheer you on. I live in the neighborhood and your work is now part of my environment. When thinking about a public art project, how do you keep the fact in mind that people are walking and driving by?

I hope that the piece can work on all levels. It is very quiet, but also very definite. On the one hand, it could be overlooked; on the other, it makes you pay attention. When you come up close you realize that the lines have a hand painted quality and that it is simply made. It creates a sleight of hand and then reveals it.