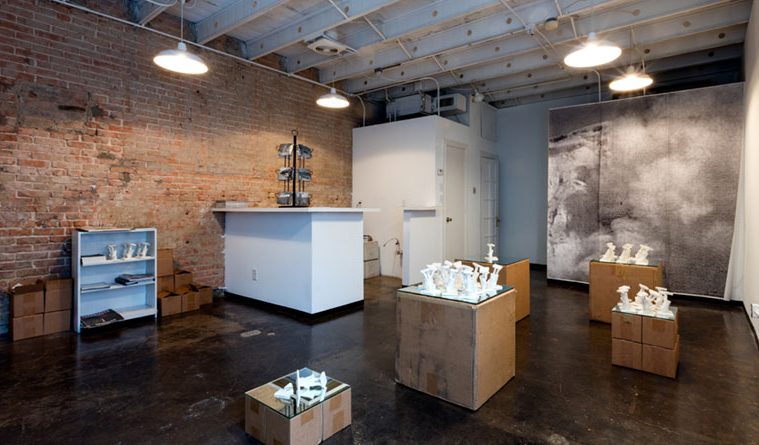 Some Memories are Painful: Jenny Vogel at The Reading Room

Jenny Vogel, In the Absence of Bodies. Installation view.
Photos by Kevin Todora.

Jenny Vogel
In The Absence of Bodies
Reading Room
Through Oct. 1

History is crowded with destroyed statues and icons, figures pulled down in periods of change or instability (victories we like to think of as ‘of the oppressed’.) In Russia they tore down statues of Stalin and Lenin; in China, it was Mao; in Iraq, Saddam Hussein.

Our continual attempt to erase the symbols of history is the subject of multimedia artist Jenny Vogel’s solo exhibition on view at the Reading Room through Oct. 1. For In The Absence of Bodies, Vogel has crafted a show in three parts: An archive of dozens of grainy found images of destroyed monuments reprinted on postcard–sized paper sits atop a counter. Meanwhile, dozens of identical ceramic sculptures of a single fallen statue, some of which were shattered themselves during transit, are displayed on makeshift tables and window ledges throughout the rest of the space. Finally, an oversized print of another grainy, indeterminate image of destruction serves as backdrop for the surreal scene. 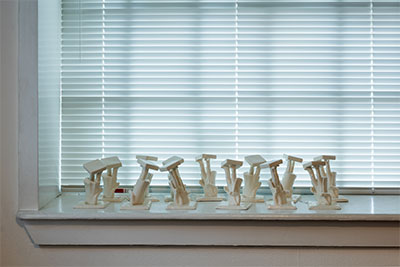 Jenny Vogel, In the Absence of Bodies.

The space is eerily reminiscent of a gift shop at a tourist site—one at which you might feel a bit uneasy purchasing a souvenir, such as the 9/11 Memorial, or the site of Kennedy’s assassination, for example. The countless images of destruction and the identical, nondescript replicas of destroyed figures stir an uncomfortably small amount of emotion in the viewer.

That’s the thing about ubiquity: It tends to lessen significance.

In this show and in much of her work, Vogel explores how we navigate the post-Internet age—the age of the inescapable image. Without trying too hard, one can imagine what impact that front page photo of Stalin’s cracked face may have had when it was newsworthy. With even less effort you can admit what little impact Vogel’s innumerable postcards of destruction have today. We’ve all seen too many images of violence. We’re immune.

However, it’s not just our experience of the image that Vogel is critiquing in the show. In her artist statement, Vogel refers to Russia and the tearing down of Stalin’s likeness, but she also cites Germany, where she grew up. In Germany, the statues of Hitler may have been removed, but care was taken not to erase significant sites completely, since removal could be interpreted “as an attempt to erase an uncomfortable history.” It’s a note of complexity in what might have otherwise been a straightforward illustration of the nature of violence and the image in the 21st century.

When is a symbol, even of something evil, good? When is the destruction of a symbol bad? Symbols are reminders and warnings; one official definition explains a symbol as “a material object representing something abstract.” Physical objects are fragile, no matter their size.  The Taliban has frequently demonstrated that in its frequent and frenzied destruction of ancient art and artifacts. And while the destruction of a symbol is only naively confused for the destruction of what it symbolizes, its destruction can often become a symbol itself. We know we can’t erase history; we can’t even forget it, and while destroying the symbolic likenesses of our oppressors can be cathartic, something may be lost in that destruction. Does it outweigh our momentary gain? And should we be considering the afterlife of our actions? How might even our well-intentioned acts be commoditized by a generation desperate for visual content?

With In the Absence of Bodies Vogel reminds her viewers that the external nature of a symbol has already emptied it of meaning and instead represents an abstraction. Destroy it, but ask, what’s the point?— Especially now. The destruction too is symbolic—a gesture,  as Vogel’s postcards intimate, easily and indefinitely replicable, and as empty of meaning as a Kardashian selfie. There are some things that cannot be erased and perhaps it behooves us to live with our past  (as the Germans have) instead of perpetually attempting to separate ourselves from it. We’ll be living with it regardless.