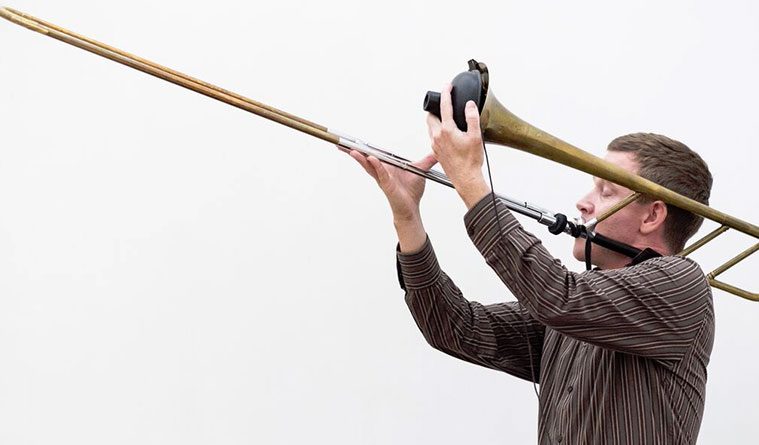 David Dove performing at the Cy Tombly Gallery as part of the Menil Fest. Photo by Lynn Lane.

David Dove has been an integral part of the Houston experimental music scene since his band Sprawl came about in the late 1980s. In addition to being a musician, Dove is also a teacher and the founding director of the contemporary music organization Nameless Sound. On June 18 at 8pm, Nameless Sound will close out its season with a performance from Charles Curtis (San Diego) and Donald Miller (New Orleans), the influential guitarist from Borbetomagus, at 14 Pews. Nameless Sound is also a 2015 recipient of a NEA grant. A + C music writer Veronica Anne Salinas visited with Dove about his voyage with improv and the nonprofit, Nameless Sound. 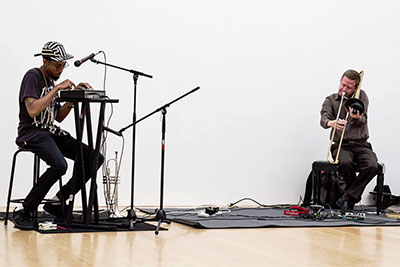 David Dove and Jawwaad Taylor performing at the Cy Tombly Gallery as part of the Menil Fest. Photo by Lynn Lane.

What attracted you to the experimental, improvisational music you promote with Nameless Sound?

Well, I think I had to discover it back before we had the Internet. I had a period where I was kind of getting serious about music in a different way and doing a lot of studying. Listening to a lot of music, playing music, it really took research and you really had to want it. I was also exploring things I had never really explored before, like art and different forms. I really had to find my way of doing something and I felt like through improvised music that I could find my way of doing something. And it was a little strange because there weren’t too many people doing it around here. But I had some threads in the dark like Pauline Oliveros.

Can you tell me a little bit about the evolution of Nameless Sound?

In 1997, I started teaching a class at MECA [to teenagers] and around that same time, I started having some opportunities through Diverseworks to present concerts in their Sonic Works series. These were occasional concerts that I would pull resources from MECA, Diverseworks, and KRTU to make these artists come and do workshops with the kids. I was given a little bit of a budget just taking resources to make these things happen. Then Pauline (Oliveros) started to neddle me and say ‘Hey you can start a nonprofit, you can umbrella under us.’ (Pauline had started the Deep Listening Institute). So we started as a branch under her umbrella with the first program in April 2001. The first big show we had with the workshop ensemble at MECA was with Peter Brotzmann (Wuppertaal), William Parker (New York City), and Hamid Drake (Chicago). 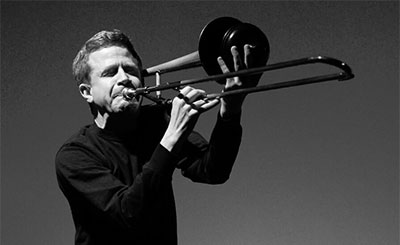 How has winning a National Endowment for the Arts Award impacted your programming?

I imagine that it’s a bench marker for us of sorts. This our third year winning a NEA grant. This past wave they’ve doubled our amount. We’ve also won the Texas Commission for the Arts, Houston Arts Alliance, and others. In terms of programming, there’s no one doing what Nameless Sound is doing in the country.

How does the work you do with Nameless Sound explore improvisational music?

Nameless Sound’s pedagogy is an extension of performance practice where, in fact, we don’t really use the word teacher, we use facilitator. The Nameless Sound facilitator is doing this as an extension of their artistic practice. So teaching is part of what we do but teaching one of the potential outcomes which are: knowledge transfer, therapy, creative work, and play. I would theorize that in any successful Nameless Sound workshop, all of these outcomes are likely happening whether explicit or underneath the surface.

What’s important is that we listen. Pauline Oliveros is my mentor, so her idea of deep listening is a very important fundamental to this, but after years of this practice, I began to understand this philosophy through the practice.  My initial impulse was to bring creativity to the young people with music because I felt that music education was conservative. So after years of doing this work, I started to look into educational theory too. I have Nameless Sound sessions that sometimes it sounds like we’re playing jazz and we’re working on scales. 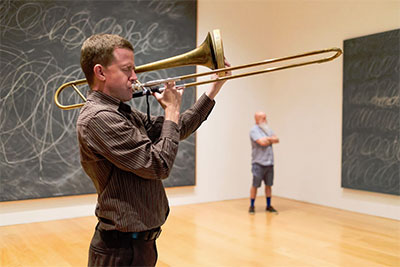 David Dove performing at the Cy Tombly Gallery as part of the Menil Fest.
Photo by Lynn Lane.

How does your work as a performer translate into your teachings?

I have a language, a personal language, that I’ve developed as an improvising musician. I feel like every improvising musician develops their own language. For instance, I have certain things I do on trombone that you’re going to hear at different concerts and in different situations. It’s just language. It’s what different conversations call for. I might play with someone who brings a whole new sound and a different sound comes out of my horn and that sound might become a part of my vocabulary.

For me, a lot of my musical language develops onstage. It develops because the moment calls for something and then maybe it sticks in my repertoire or not. When I first started doing this, I didn’t want to shape them into being a particular musician. As I practiced this over the years, I have a much more nuanced sense of what that means. I also have to acknowledge that that power is something not something I should try to deny but I should use to uplift. We also use our history, experience, our empathy, and knowledge to teach. Nameless Sound doesn’t have a curriculum, it has a philosophy and ideals.