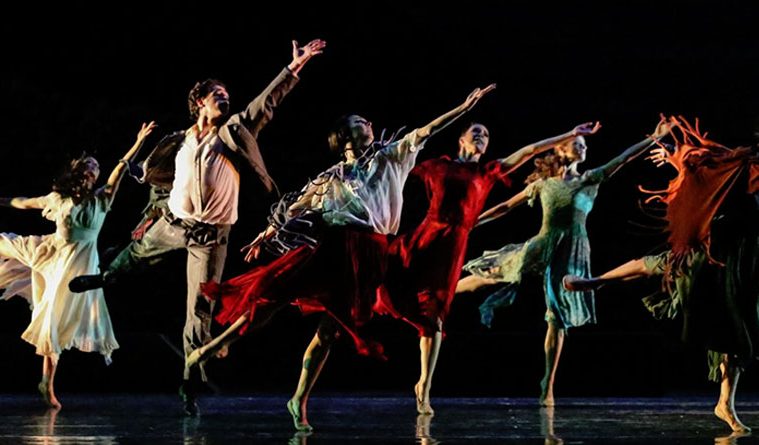 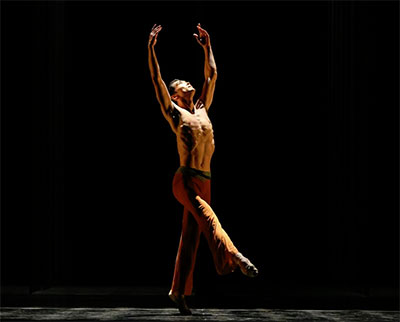 When Karina Gonzalez goes flying between Connor Walsh and Ian Casady in the charming pas de trois from Stanton Welch’s Tapestry, you just want to see it again. And boom, it happens again: the fearless Gonzalez soars through the airspace once more, just in case you thought you were seeing things. And we were, our hometown ballet team in top form performing their hearts out during Houston Ballet’s Fall Mixed Repertory, in a program that also included Christopher Bruce’s masterwork Ghost Dances and Reveal, a world premiere by former Houston Ballet dancer and rising choreographer Garrett Smith.

Back to that pas trois in Tapestry for a minute. It’s great to see Welch apply his choreographic pas de deux savvy to a trio, this time creating a nucleus around which the rest of the piece revolves. It would be easy to say it’s Gonzalez’s ballet, but it’s also Charles-Louis Yoshiyama’s ballet, as his alternately crisp and lyrical solo begins and ends the piece. But actually, Tapestry belongs to whichever dancer occupies the stage at any given moment. Welch is supremely gifted at mining his flock’s specific talents, and the many spectacular solos in Tapestry do just that, one after another.  Tapestry’s hand woven quality makes it a company showcase of a higher order. Violinist Denise Tarrant played brilliantly during the Houston Ballet Orchestra’s performance of Mozart’s Violin Concerto No. 5. 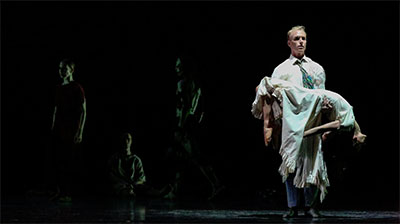 Houston Ballet fans have been waiting a decade to see Bruce’s 1981 Ghost Dances, a work of haunting beauty and pathos, set to South American folk songs recorded by Inti-Illimani.  Created in part in response to the 1973 overthrow and death of Chilean President Salvador Allende, Ghost Dances sets up a mythical scenario, whereby three ghost dancers, marvelously portrayed by Casady, Christopher Coomer and Yoshiyama (what a great night for this young man), exist between the living and the dead, catching the fallen as they pass. Bruce’s brilliance lies in his subtle movement choices, the tension between shape and rhythm, and the ability to spin a narrative through a sequence of vignettes. Bruce gives his skeleton dancers archetypal contours, sometimes even hinting at early Martha Graham works, while the ensemble is rich with his highly textured, invented folk vocabulary. Sharp and playful dancing characterized Christopher Gray and Gonzalez’s moving duet. (In fact, Gray stood out throughout the whole evening for his animated and clear dancing.) The final diagonal dirge proved simply breathtaking, and a reminder of what Bruce does so well, making so much from the tiniest movements, this time, a group of people shuffling off into the ether,  disappearing quietly into the wings. The ballet’s power lies exactly in its ability to construct a ritual of remembrance. 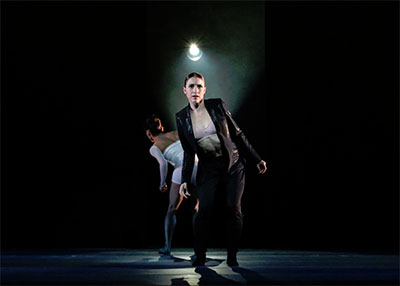 Reveal may be Smith’s most fully realized ballet of his career so far. The young choreographer has been busy since leaving Houston Ballet, setting work on Ballet West and slated to set a work on New York City Ballet for the 2015 New York Choreographic Institute Fellowship. Drama, intensity and swirling Matrix-like overcoats kept the tension high in Smith’s faced-paced ballet. Reveal’s dark, futuristic, club feel also contained just enough of that Euro-agnst to completely set it apart from the earlier ballets of the evening, making a strong finish to a great night of dancing. Smith’s ballet included several standout performances, especially the sinewy Jessica Collado, whose fluency in classic jazz forms is always an asset. The always dynamic Gonzalez provided a perfect foil to Collado’s sensuous style.

In the end, though, the evening was more than a collection of three outstanding ballets: it told a story about the company, with Welch’s tailor-made Tapestry, a rare work by Bruce, whose long standing relationship with the company includes 11 works, and then pointing to the future with Smith. The young dancemaker now joins a list of established choreographers, such as Trey McIntyre and Dominic Walsh, who also got their start under the Houston Ballet roof.