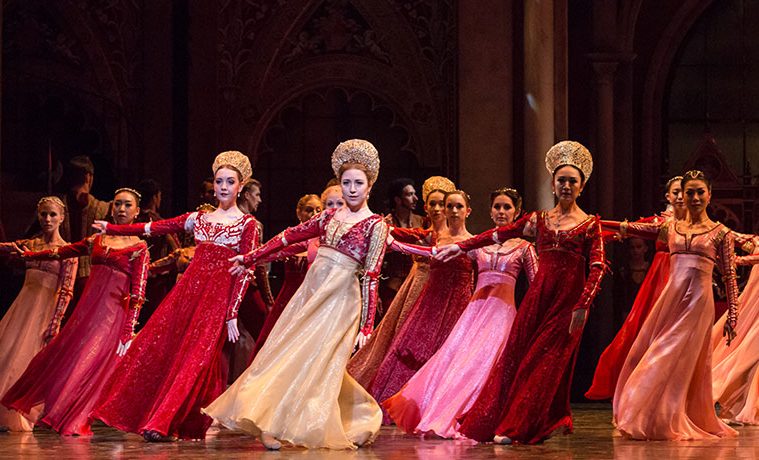 A Stunning Romeo and Juliet at Houston Ballet 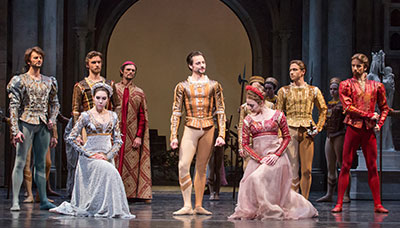 Houston Ballet’s new production of Romeo and Juliet is a three-act ballet of striking contrasts. The Montagues wear blue, while the Capulets don red.  A rambunctious, colorful carnival scene contrasts with an outbreak of the plague in the poor streets of Verona. Meanwhile, Romeo and Juliet overcome familial differences while their clans feud, continuing a long history of bloodshed. Ultimately, the richly decorated ballroom of the Capulet household contrasts with the cold, candle-lit family crypt where Romeo and Juliet meet their maker.

Artistic Director Stanton Welch’s take on this Shakespeare classic is simply breathtaking — as in, it literally inspired wonderfully stunned intakes of breath amongst the audience.

The luscious sets and costumes, the work of Italian designer Roberta Guidi di Bagno, brought the alleys, markets, castles and crypts of medieval Verona to life. The set design looked like it had been plucked straight from the streets of Italy, with its stone pointed archways, laundry hung out to dry on balconies, stained glass windows, ivy-covered walls and street vendor carts selling everything from fruit to flowers. The detailed costuming — color-coded for ease of identification of the characters — was invaluable in keeping the Montague, Capulet and Escalus families straight.

Then there was Welch’s choreography. His decision to ground the ballet in the original Shakespeare text meant the production included characters and scenes we typically don’t see in ballet versions of Romeo and Juliet. This led to some delightfully unexpected moments, such as Act II’s cheerful carnival scene, during which Romeo’s friends poke fun at his obsession with Juliet, who he recently met at the Capulets’ masked ball. 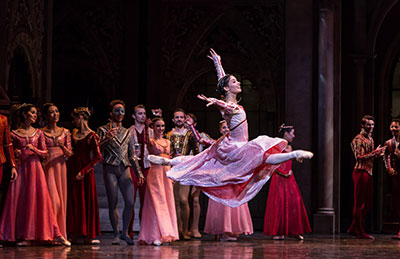 In Welch’s ballet, just as in the original play, there are plenty of lighter moments that help balance the story’s displays of agony. The March 8 matinee performance featured dancers Derek Dunn and Rhodes Elliott in the roles of Balthasar and Benvolio, respectively — the goofy sidekicks to Ian Casady’s lovesick Romeo. Dunn and Elliott’s flirtations with the tavern owner’s daughters and boyish jesting were set against the violence of the Montague and Capulet men, which made for some impressive group sword fighting.

But perhaps what was most enjoyable about Welch’s choreography was how seamlessly it embraced Sergei Prokofiev’s dramatic score, played live by the Houston Ballet Orchestra; the dance and the music were inextricably fused.

Opening night cast with Connor Walsh as Romeo and Karina Gonzalez as Juliet gave this couple another chance to show their growing connection. Both Walsh and Gonzalez embodied the urgency (and friskiness) of young love with full abandon, navigating Welch’s sensuous swirls with a sense of discovery, trust and even a splash of new love tenditiveness.  At times, it seemed as through Gonzalez floated along the surface of Walsh’s body, cherishing the contours, and amplifying the idea of becoming one in a love relationship. Welch’s savvy as a master crafter of the pas de deux is on full display here. 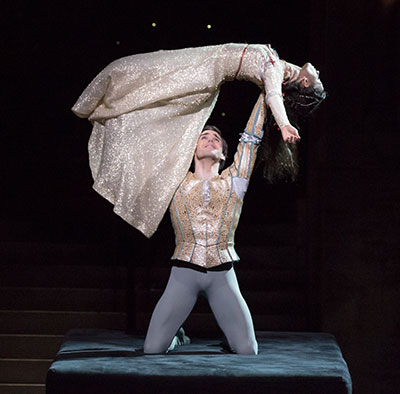 March 8’s Casady and his Juliet, Melody Mennite, had effortless chemistry, especially in the famous balcony scene just after they’ve fallen in love and in the bedroom scene after their secret wedding. The pair, besides dancing flawlessly, were utterly convincing as yearning teenagers. This desire took a pensive turn when, after having spent their first night together as a married couple, Romeo sneaks out of Juliet’s bedroom as a new day dawns. Romeo and Juliet’s bedroom pas de deux was both tender and exciting, as Casady floated Mennite’s seemingly weightless body through innovative lifts. Dressed in a white-chiffon nightgown, Mennite was as heavenly as a spirit.

Romeo and Juliet ended on an appropriately dramatic note. From the moment the curtain rose to reveal the candle-strewn Capulet crypt, one could not help but feel the air had turned just that much cooler, the dankness seeping into the livings’ bones. But Romeo and Juliet are not long for this world; splayed out atop Juliet’s tomb — one having consumed poison, other having stabbed herself — we can only hope, tearfully, that they are headed to a better place.

Nancy Wozny contributed to this review.