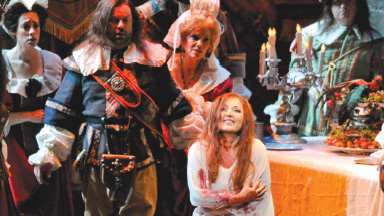 Staying in Tune at Dallas Opera

The Dallas Opera hit a sour note months ago when it abruptly announced the cancellation of “Ká?a Kabanová” that had been scheduled to play at the Winspear Opera House in the new season that just commenced. General Director and CEO Keith Cerny made the announcement, look citing a “significant financial shortfall” of ticket sales and donations from last season. That July day could prove to be a defining moment in the history of the organization — which was charted by civic leaders as Dallas Civic Opera in 1957 — as Cerny was widely praised for tackling a staid budget head-on, hospital even at the cost of some refunds and head-turning.

But the future remains uncertain for opera companies across the board in these times of economic hardships and a changing social culture; how do you cultivate new audiences for an art form that dates back centuries? The 47-year-old Cerny (SUR-nee) officially took charge of the Dallas Opera on May 24, 2010, as the seventh general director in the history of the organization. After the short and tumultuous tenures of previous leaders Karen Stone and George Steel, Cerny, who radiates low-key competence, brings a welcome change. He is the former CEO of Sheet Music and served as Executive Director and CFO of the San Francisco Opera from 2004-2007.

A+C’s classical music writer Gregory Sullivan Isaacs sat down for lunch recently with Cerny for a discussion on the challenges facing opera today.

A+C: Is it time to come up with another name for the Dallas Opera, that doesn’t include the weighty, snobby baggage associated with the name “opera”? Because the art form, as you envision it, is not limited to 18th and 19th century warhorses; it’s vibrant, compelling theater – an experience the name “opera” doesn’t conjure up in most people’s minds.

KEITH CERNY: While I agree that the word “opera” may not always be our best marketing vehicle, it is, nonetheless, the term for what we do. It’s up to us to take that term and redefine it for 21st century audiences, as exciting, fun, and relevant. We intend to achieve this through a greatly expanded educational and community outreach program, regular opera simulcasts and public events, great mainstage performances and compelling chamber operas produced in a range of venues throughout North Texas. I also think that we need to tackle this branding issue head-on, and I am always seeking ways to work with the popular treatment of opera to enable us to heighten general awareness and achieve more widespread success.

My wife and I have four boys, ranging in age from 9 to 18, and as you might expect, we enjoy introducing them to the world of music and opera. I still chuckle, though, when I remember that their first exposure to Wagner’s masterpiece, “The Flying Dutchman” came through episode of “SpongeBob Squarepants!” In the same vein, if “The Simpsons” has planted even a cartoon seed of familiarity with “Pagliacci,” it immediately makes my job that much easier. After all, an entire generation learned “What’s Opera, Doc?” from Elmer Fudd and that rascally rabbit, Bugs Bunny.

This season we’re reaching out to children and families with a new children’s opera production of “Doctor Miracle,” a charming musical gem by Georges Bizet (Carmen, The Pearl Fishers) composed when he was still in his teens. I recently attended our second performance of the work at Dallas Children’s Theater and was particularly gratified to see that the production had attracted an extremely diverse audience of all ages. Nearly everyone appeared to be enjoying the comic aspects of the piece, proving that productions like this are a great way to create a positive “first contact” with this art form.

What elements have transformed the art form from an emphasis on static “park and bark” performances to the exciting, total theatrical experience that opera is today?

The expectations on opera companies rise every year, on both an artistic and financial side. There has been a trend in opera — going back 25 years or more — to make performances more compellingly theatrical. The introduction of the VCR a generation ago made watching an opera in the comfort of your home possible for the first time. The trade-off for this convenience was the loss of acoustical quality, which inevitably prompted audiences to pay closer attention to the dramatic qualities of the individual performances. As opera companies began to produce products for the expanding digital audience, they had to take into account problems film directors have wrestled with for years: the number and locations of cameras; pans, zooms, and cuts — all of which had an impact on stage direction.

More recently, the explosive growth of media on the Internet has again redefined what constitutes effective theater, while influencing patron expectations in every opera house in the world. I am also very conscious of the impact of MTV on musical expectations. Contemporary audiences are now conditioned to expect rapidly changing visuals. One Lady Gaga video clip on YouTube of “Bad Romance” has had close to 421,000,000 views. What struck me about this particular clip was: how many changes of sets, costumes and camera angles occurred in a brief, five minute piece of music. While some of our older audience members may be quite comfortable with a relatively static staging of a five-minute aria, it is already quite clear that we are raising an entire generation geared to expect a different type of entertainment experience.

How have artistic expectations been changed by the tremendous advances in natural performances in film and on television, the cinematic quality of 21st century entertainment and audience demand for physical as well as musical appropriateness?

Artistic expectations have changed hugely over the past decade. The growth of “Reality TV,” not to mention scripted, yet naturalistic, TV shows such as “The Office,” have created a new type of audience less comfortable with a too self-conscious style of operatic performance. That being said, the sheer size of most opera houses means that physical gestures must be at least somewhat exaggerated, and acting, bolder, in order to simply register in that space. On a different note, today’s Internet savvy patron (especially the younger patron) is often more sophisticated than he or she realizes, due to near-continuous exposure to a previously unimaginable range of theatrical materials and formats, acting styles, and content. Special effects have become much more pervasive — in movies and live theater. There’s a demand today for opera singers to practice their art while flying through the air, swimming in the sea, while moving dynamically around the stage, or even — as in one memorable production of “The Italian Girl in Algiers” — skipping rope. As a society, we are intrigued by the young and glamorous and this, too, has influenced our collective expectations. At a performance of Gounod’s opera “Romeo and Juliet,” we take it as a given that the star-crossed lovers will be youthful and attractive. The ability to “suspend our disbelief” allows us to accept adults in the roles of young teenagers; however, the days when a 50-year-old Romeo could court a matronly Juliet without raising eyebrows, are long gone. There are new technical considerations as well. Theatrical lighting has made huge strides over the last decade, and audiences have come to expect superb lighting, on top of everything else. Even theatrical make-up has faced new challenges as artists and designers explore creative solutions to dazzle patrons in a 2,200-seat theater, as well as those watching gigantic close-ups on a simulcast screen. Decades of Hollywood films have conditioned audiences to want active, believable stage fighting; ideally, with some kind of “twist.” And, whereas it was once thought that projections and video elements would ultimately replace wood-and-steel set pieces onstage, the reality is far less simple than that, with video often being used to enhance rather than replace the old ways of doing things. This combination of lightning-speed technical innovation and audience expectations ratcheting higher, from year-to-year, usually results in a more compelling theatrical experience — but one achieved at an ever-increasing cost.

Does the season’s first production of “Lucia di Lammermoor” reflect these changes in standards and audience taste? Does it have an edge?

If an opera company doesn’t have a narrowly defined mission, it should be judged — and judged fairly — on its versatility as well as its artistry. The Dallas Opera is out to deliver outstanding, top quality productions and performances, whether large or small, period or contemporary. For this “Lucia,” we aspire to perform a 19th century classic in rich, period style. We have engaged a superb international ensemble, many of them seasoned performers in their particular roles. They both sing and move extremely well; they are dramatically effective and highly believable in glorious costumes by the late, great costume designer Peter J. Hall. This is a definitely a production worth seeing and one, of which, I am very proud. The performances alone will keep audiences on the “edge” of their seats.

Two seasons ago, Dallas Opera premiered “Moby Dick” just before you assumed your new duties here. It was such a groundbreaking success: abstract yet realistic, and highly critically acclaimed. Do you see the company commissioning more new works in the future?

Let me cut to the chase: commissioning new works is one of my priorities as General Director. At the same time, we need to carefully regulate the pace of those commissions with the financial reality of the times, and with the clear understanding that world premieres are always going to be one of any opera company’s most expensive options. However, we may have a partial solution to offer. By “pre-funding” works several years in advance of their scheduled premieres we can significantly reduce the risks associated with mounting new works. We have a major world premiere planned for the fall of 2015 and have already made excellent strides towards lining up the necessary funds to support it. But while we’re on the subject of new works, there’s another way to innovate cost-effectively, and that is to commission shorter pieces from leading composers — one-acts or monodramas. The Dallas Opera is currently deep in discussions with another critically acclaimed composer about a world premiere of a more compact, one act opera in the not-too-distant future.

As a composer, the hardest thing to get is a second performance of your work. The annals of opera are replete with pieces that have had successful world premieres and then promptly vanished. Is giving contemporary works and other opera rarities a second look — and perhaps a second life — in the cards at the Dallas Opera?

In my role as General Director, I have to examine future seasons from all angles, even before they are created. There’s a trade-off involved in staging a past success versus something completely shiny and new. I will say that we are already committed to one such revival in upcoming seasons, but you can rest assured that we’ll be bringing fresh ideas to this project, as well.