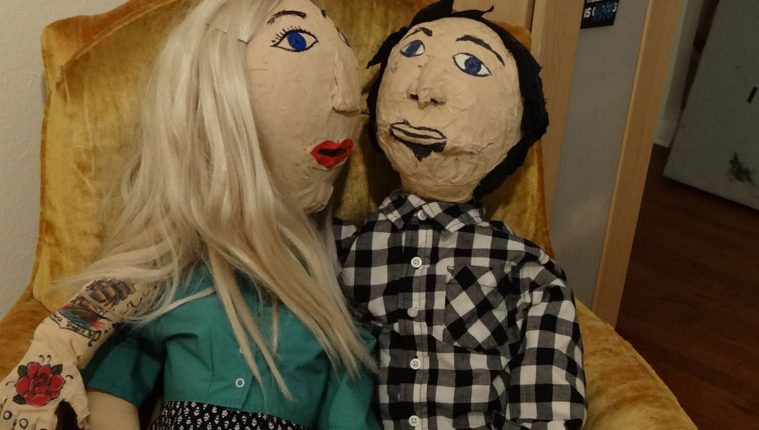 Miles and Tweed from BooTown’s Love in the Time of Lasers.
Photo courtesy of BooTown.

Getting Behind Houston’s Puppet Scene

There is something incredibly uncanny about puppets. As children we are drawn to their whimsical powers; as adults they weird us out. They are inanimate objects that can magically move and talk. We know that there is someone behind them, but that does not seem to deter us from being drawn to them. Love them or hate them, a plethora of puppets will be soon taking the stage as  Puppetsploitation IX: Bobbindoctrin Mostly Annual Slam opens the first weekend of April.

Puppets and Houston have had a remarkable intersection. On a grand scale, some of Houston’s greatest cultural institutions have played host to puppet shows: Famed puppeteer Basil Twist made an impact on Houston when he created an enormous witch for Houston Grand Opera’s production of Hansel and Gretel in 2011. Twist also collaborated with Joe Goode Performance Group, presented by Society for Performing Arts in 2009. Most recently, the Asia Society Texas Center presented a performance by Japanese master puppeteer Michika Iida. And both the Museum of Fine Arts, Houston and 14 Pews offered Quay Brothers festivals.

But Houston’s puppets can also be found in the city’s underground arts scene, and when you are talking about counter-culture puppets and Houston, you must mention Joel Orr, the founder and artistic Director of Bobbindoctrin Puppet Theatre.

Orr started out as a playwright and began exploring puppetry as a means to express his writing. Puppets could act out his words in a manner that people could not. Orr looked around Houston and didn’t see much of a puppet culture, so he decided to start his own.

He founded Bobbindoctrin in 1995, and the company has been creating original puppet works for close to two decades now.

To understand Orr’s work without visual aids is difficult; his last production, My Cold Dead Fingers, took place in a post-apocalyptic wasteland of demons. When you think about puppetry, however, Bobbindoctrin’s left-of-center approach might not be the first thing to come to mind. “We do satires that are often very dark,” remarks Orr, “and we do them in unconventional venues.” You can find the group performing at bars and nightclubs. Orr’s love of puppetry seems to have turned on a faucet that has trickled its way across Houston.

“I would say that Joel was the linchpin for me to get into puppetry,” states Camella Clements, another big name in puppetry in Houston. She saw a Bobbindoctrin show in the ‘90s and was immediately hooked. “Puppets became the nexus of all of my artistic interests,” Clements says.

Clements began working with Orr’s troupe and expanding her knowledge of puppet mechanics. Clements become a company member and has moved into producing her own shows. One her most recent productions, Fantasies of Stabbing Edison in the Neck: A Nikola Tesla Puppet Show, combined elements of traditional rod puppetry with shadow puppets set against the electric blue backdrop of Tesla’s lab.

“There is so much you can do with a puppet and so many directions you can take this artistic form in,” Clements remarks. “Puppets can be made out of any material (Clements has been known to use garbage and frozen milk), they take direction really well, and they can do things that humans cannot.”

Orr’s influence can be felt all across the city. Puppetry in Houston has been exploding: In the past few years, several other performers and groups have taken to using puppets as a way to express their art. Names synonymous with Houston’s puppet culture, in addition to Clements, are Jenny Campbell, Justin Dunford, Joe Wozny, Ornery Theatre, Puppet Pizzazz, Paedarchy Puppets and BooTown, to name a few.

BooTown began incorporating puppetry into its theatrical performances roughly two years ago, and has since produced four shows primarily using puppets to create members of the metal band Gwar, childhood sweethearts, dinosaur aliens and everything in between. This past year, the group produced River Bottom Rules, a semi-autobiographical show based on co-artistic director Lindsay Burleson’s childhood and the use of puppets was integral not just to the performance, but to the emotional sincerity of the show. “I just didn’t think we could find the right people to convey the elements of this show,” Burleson states as a reason for using puppets. “People can’t create catharsis in other people.”

Joe Wozny, a Bootown puppeteer and writer, shares a similar sentiment. “You are disembodied from the audience,” says Wozny, who recently showed Sitcom, his first puppet video featuring puppets made from plastic cups filled with wine.  Wozny explains that there is a “silliness” to puppets which means you don’t have to take yourself so seriously.

Still from Sitcom by Joe Wozny with Lauren Ferrante.

If “silly” is a good word to describe puppetry then so too is “creepiness,” which is how Kelly Switzer,Sco-founder of Ornery Theatre, describesthe art form. Ornery has incorporated puppets in two of her shows, and the response has been tremendous. The company’s most recent production, Chtuhlu: A Puppet Play, sold out its entire weekend run. Switzer and her team labored painstakingly to create lifelike puppets, which was, to her, the worst part of the process.

“Making the puppets is where the sweat comes in,” Switzer laughs, “and it’s not the most fun.”

She was also introduced to puppetry through Bobbindoctrin and, like many others mentioned, appreciates the ability to have more control over puppets, as opposed to working with actors.

The other thing that all of the puppeteers in Houston agree upon is that the interest in puppets in the city has been growing exponentially. The number of people and groups performing has grown, as have the audience numbers. Some of this can be attributed to the city’s support of the scene. Both Clements and Ornery Theatre have received grants from the Houston Arts Alliance to produce their puppet shows. Additionally, Orr was featured in Houston’s new “Houston Is…” tourism campaign that is being widely promoted by the city’s Greater Houston Convention and Visitors Bureau.

Bringing even more attention to puppets in Houston is Bobbindoctrin’s Annual Puppet Slam. For the past nine years the group has hosted a puppet festival that invites puppeteers and arts organizations to try their hands at puppet theater. This year’s festival will take place the first two weekends of April and will feature newbies such as the drawing group Sketchy Neighbors, as well as some of the who’s who of the puppet scene such as Clements, Orr and BooTown, among others.

Puppets may be taking over Houston, but at least people are behind them all the way.