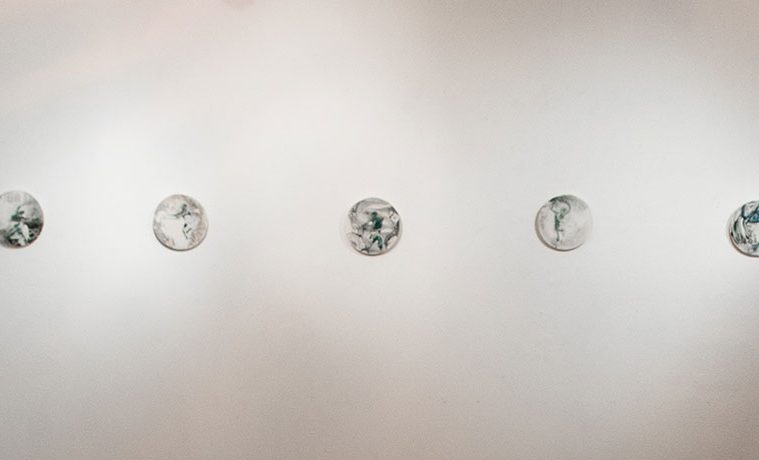 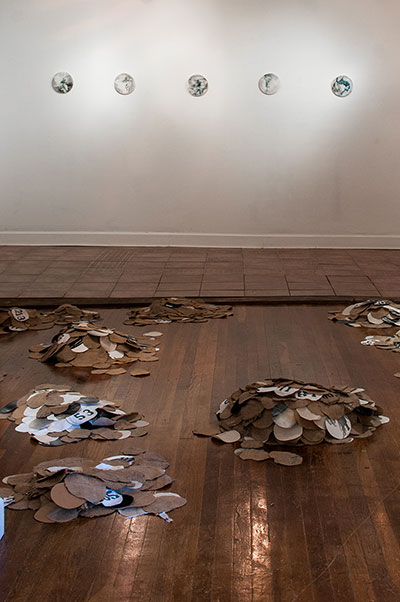 Currently on view at BLUEorange Contemporary, Suga is the fifth exhibition in a cycle of collaborations between artists Rabéa Ballin, Ann Johnson, Delita Martin and Lovie Olivia. Continuing the tradition of the previous exhibits (Roux at the Houston Museum of African American Culture, Stir at Gallery M Squared, Mojo at Prairie View A&M University, and bās at Art League Houston), each artist used the word “sugar” to explore its historical, cultural and personal connotations while confronting the boundaries of experimental and traditional printmaking techniques.

Visitors entering the gallery are immediately confronted by the bold yet comparatively traditional style of Delita Martin’s I, Candy. Exploring the notion of women as “eye candy,” Martin combats the portrayal of women as aesthetically-pleasing objects by creating more in-depth visualizations of women. By weaving together patterns and color over series of portraits, she explores the multifaceted inner-self that the “eye candy” images of modern media tend to ignore. Each patterned portrait is encompassed by a circle—a vessel for each aspect of that individual’s character beyond the sexualized, superficial displays to which we’ve grown so accustomed.

Moving into BLUEorange’s side room, Ann Johnson’s Suga Blues is an installation that explores the ideas of sugar, color, and the blues in a series of personal narratives that pair print and video. Each pairing displays an interview with a Houston native, such as singer Michele Thibeaux and Marlon Hall of Folklore Films, accompanied by a portrait of that individual printed on a feather. Without headphones, the interviews are broadcast into the space, leaving visitors to interact with each piece individually or create a cacophony of sounds that make the gallery seem bustling even while alone.

As visitors loop back through I, Candy, they enter the main space of the gallery where Rabéa Ballin’s Country Code: 234 occupies the space with literal mounds of metaphorical representations. Working with the idea of the missing “r” in Suga, Ballin’s floor installations examine the struggle of kidnapped women in Nigeria through a series of prints on circle cuts of coffee bags organized into piles throughout the space. It scrutinizes our ability as a culture to handle these issues effectively. Scattered around the floor, visitors are forced to confront the issue of these missing women as they awkwardly navigate through Ballin’s visual minefield. On the other side, they come face-to-face with a sense of familiarity in Lovie Olivia’s Sangre Sucre.

Translated to “blood sugar,” Sangre Sucre blurs the ideas of gender roles and personality in a series of fresco-like mono-prints. Working with plaster, a material traditional in Olivia’s body of work, the reactions of the materials ultimately culminate in visually unique nuances that leave the subjects vague, possessing more attitude than identity. It’s also this blend of materials and color that makes the series reminiscent of the fine china that the matriarchs of many families held so dearly that they were reserved for only the most special occasions—those occasions made memorable by sharing something sweet with your loved ones.