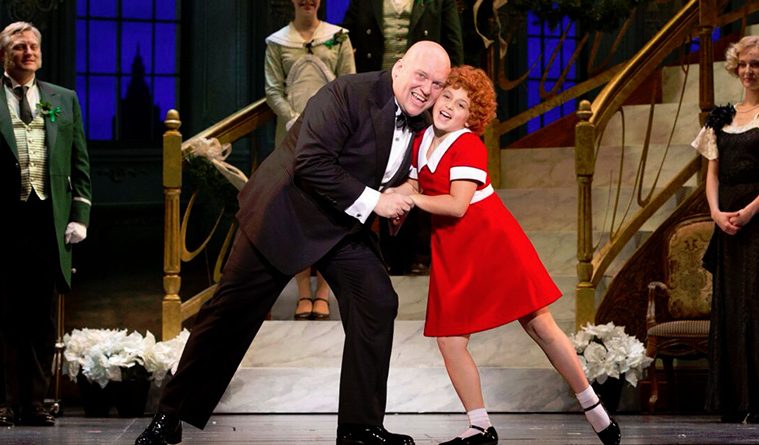 Gilgamesh Taggett as Oliver Warbucks and Issie Swickle as Annie in “I Don’t Need Anything But You”.
ALL PHOTOS © JOAN MARCUS. 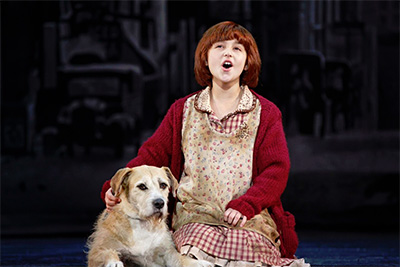 Issie Swickle as Annie and Sunny as Sandy in “Tomorrow.”

One would have to have a stone heart not to like Annie, the spunky orphan girl with bright red hair and a contagious sense of optimism. The popular family musical that decades ago spawned the classic tune “Tomorrow” is winding down a national tour playing at the AT&T Performing Arts Center in Dallas through July 5.

The original Broadway production of Annie opened in 1977 and ran for nearly six years. It spawned numerous productions in many countries, as well as national tours, and won the Tony Award for Best Musical. The birth of Annie actually dates back to the 1920s, when “Little Orphan Annie” premiered as a comic strip by Harold Gray in larger metropolitan newspapers. The print comic inspired a radio show in 1930, and two early film adaptations before the Broadway musical propelled Annie to superstardom. Two later films, one in 1982 and most recently last year, were not able to capture the charm and vitality of the stage show, however.

This brand new production of Annie features a 25-member company, and is directed by original lyricist and director Martin Charnin. Of course, the show’s charm rests squarely on the shoulders of the young actress cast in the lead role and here, nine-year-old Issie Swickle is just fine in voice and movement. She may lack the charisma of past Annie’s (namely Andrea McArdle as the original on Broadway and Aileen Quinn in the 1982 film) but she’s full of spunk and blends well with her adult co-stars. 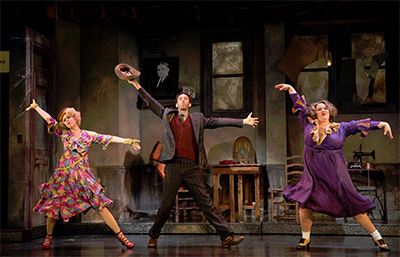 Gilgamesh Taggett makes a durable Oliver “Daddy” Warbucks, the billionaire who’s stoic personality is melted by Annie’s pluck, although it is Lynn Andrews’ over-the-top portrayal as Miss Hannigan, the bitter orphanage-director, that steal nearly ever scene. Andrews is the best singer in the bunch, and her comic timing spot on. Thankfully, director Charnin keeps her in the spotlight through most of the story that finds Annie desperate to escape the dank confines of the orphanage in search of brighter tomorrow’s with her birth parents.

All the sing-along numbers are here —“It’s the Hard Knock Life,” “Easy Street,” “I Don’t Need Anything But You,” plus the eternal anthem of optimism, “Tomorrow” —set design by Tony-winner Beowulf Borritt (Act One) is impressive, as are the stylish costumes by Suzy Benzinger.

Certainly Annie’s “never-give-up” attitude is still in fashion, and this new touring show never waivers from making the show all about entertaining audiences of all age