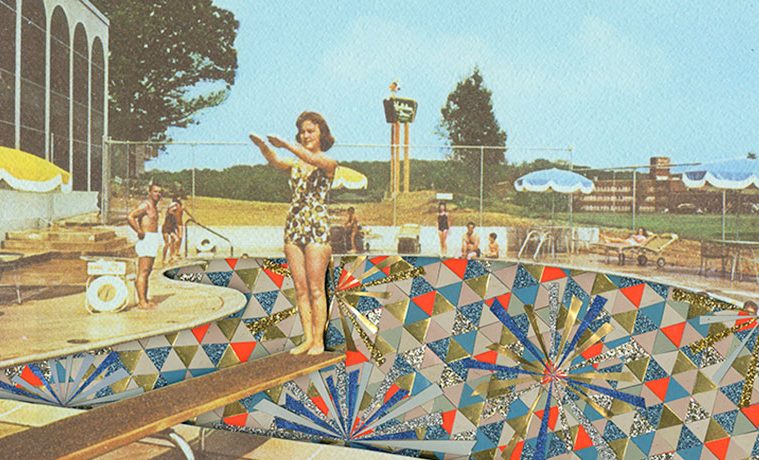 Jesse Amado, Kelly O’Connor and Andrew Havenhand at the Southwest School of Art 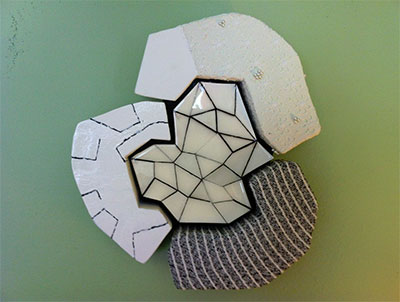 Unusual, expressive materials used to reveal intimate insights link two artists from San Antonio – Jesse Amado and Kelly O’Connor — and one from the East Coast – Andrew Havenhand — in Confections and Fictions, a Contemporary Art Month exhibit at the Southwest School of Art on view through April 26. Relating his work to the cutouts of Henri Matisse, Amado uses virgin wool felt in vibrant colors to examine the effects of anti-depressants while O’Connor taps into nostalgic, vacationland fantasies with her shadow-box swimming pools at 1950s and ‘60s motels. Havenhand creates abstract portraits using lacy material that hover somewhere between fine and applied art.

One of San Antonio’s most distinguished artists, Amado was forced to give up making art in the last five years while he battled cancer but, if he remains free of symptoms, Amado says he expects his doctor to declare him in total remission in March. Known for the contrast of hard and soft materials in his sculpture and his interest in the transformative qualities of art, Amado employs felt in a variety of brilliant colors and suggestive shapes to examine the pharmaceutical-based treatment of depression. A circular floor piece vaguely reminiscent of a futuristic yin/yang symbol, Antidepressent Command Center Rug, is divided into a blue and a red side with circles and waves that could be readouts for a personal, emotional mood chart.

In his wall pieces, Amado uses knotted and draped pieces of material on neutral, circular backgrounds to evoke various states of mind with titles such as Mendacious and Untruthful. Effigy in bright red and orange could be a hanging body, or possibly a martyred mind. Several pieces of colored felt are pulled back like layers of emotion signaling different states of mind in Incident, a floor piece which perhaps symbolizes the times when the negative side effects of modern medicine outweigh its positive benefits.

In contrast O’Connor works with representational images, vintage photos of vacation resorts such as Holiday Inn of Hopewell, Desert Gem Motel and Ramada Inn, Disney World, infusing them with childhood fantasies by transforming the swimming pools into dimensions of imagination and wonder, filling them with geometric, candy-colored patterns and starburst designs. Using digital printed images as backgrounds, O’Connor cuts out the bottom of the pools and insets them slightly for a more three-dimensional effect. The color photographs have faded almost to sepia, but their wan, wistful tones evoke dormant memories and subconscious associations from a time when childhood road trips were an integral part of the American Dream.

Born in Yorkshire, England, Havenhand attended art school in Leeds as well as at the Cardiff College of Art in Wales. Influenced by American abstract expressionist painting, he moved to New York City in 1980 to study painting at the Brooklyn Museum of Art. In 1984 he earned an MFA in painting from The School of the Arts at Virginia Commonwealth University in Richmond, where he lives. Currently, he is an assistant professor and program exhibitions coordinator at Syracuse University in New York.

As he’s grown older, Havenhand has moved away from the aggressive, gestural style of abstract expressionism to a more passive, gentler approach to the canvas, although his use of layered materials, geometric patterns and shaped canvases is more than minimalistic. With titles such as Stanley, Beatrice, Albert and Frank, his small, mostly white confections are easily read as portraits. The lacy, gauzy materials he uses may be more associated with decorative, domestic uses, but they have an inherently warm and comforting appeal. While his earlier work was large and colorful, Havenhand has since learned how to express emotional truths with a minimum of fuss.