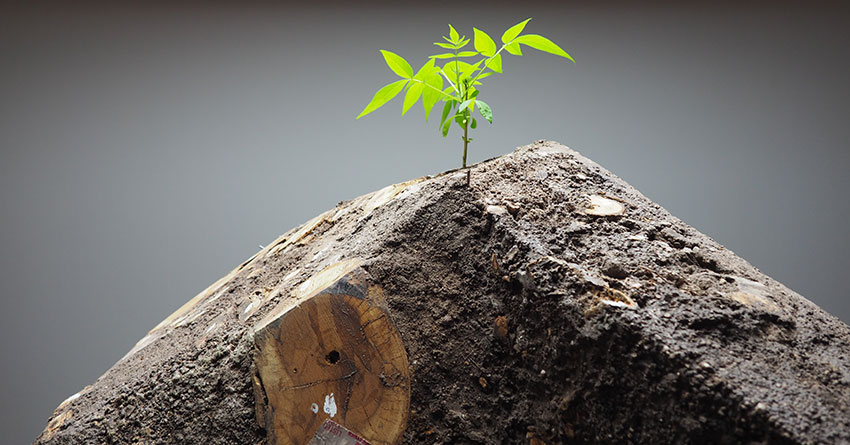 An alchemist seeking ways to transform mundane materials into the sublime, Houston-born sculptor Larry Bamburg has arranged an altar of bones held together by ice, created a mobile with knotted string and tangled monofilament, stacked burls of wood and piled up shells. As a Fall 2015 International-Artist-in-Residence at San Antonio’s Artpace, he has extracted the root ball of a mulberry tree from his backyard and cut it into a huge, asymmetrical block with smooth sides that almost appear to have been laser cut to form an abstract modernist sculpture sprouting new growth.

For months, Bamburg collected road kill and dropped it on the root ball, causing the dirt to become super-fertilized. He planted small starter trees on what he calls the “decomposition island,” and they sprout from the geometric root ball that’s placed on its side. Islands of green dot the black soil, along with wadded pieces of foil, paper, sticks, and stones. The new growth should help hold the root ball together as it decays. He’s scanned the root ball and plans to create an elaborate map of the surface.

“I like the idea of everything coming to it, and then taking everything away,” Bamburg said on a walk-through of his installation on view through Jan. 3. “I’m looking for ways of taking out the objectivity of the material. By design my process takes out the subjectivity in the making.”

Pushing at the boundaries of his materials, Bamburg allows chance to intervene and is concerned with how artistic intention shapes and molds the possibility of a material. He generally starts with an idea of the end result he wants and then figures out what he has to do to make the material comply. As part of his process, he takes on materials he doesn’t really know much about and then learns how he has to adapt his thinking to make it happen. His other works at Artpace are made with black plastic bags and soap assembled in dense layers that tend to resemble a cross-section of natural and man-made sediments.

Talctotile is made from a 300-pound piece of talc and pink bathroom tiles he found at an architectural salvage yard. To serve as a bridge between the two layers, he added bands of pink soap to create a miniature mesa. The pink tiles are lined up along the bottom, while the talc has been left uncarved to form a craggy peak. However, Bamburg had never worked with soap before and had to learn about its chemical changes over time.

Building on the base of an old tire, Bamburg added layers and layers of black plastic garbage bags along with other black-colored plastic debris to form an altar-like stack of dark matter, Talctotire. There’s a strong chemical odor and some of the drooping layers of trash bags have been fused to resemble melted tar.

Bamburg’s BurlsHoovesandShells at the Simone Subal Gallery in 2013 earned a spot on Jerry Saltz’s “The 10 Best Art Shows of the Year” in New York magazine. With a BFA in painting and metalsmithing from Texas Tech University, he has an MFA from the University of Massachusetts-Amherst. His wife, Jenny Moore, heads the Chinati Foundation in Marfa.

Along with Marie Lorenz of New York and Cally Spooner of London, Bamburg was selected for the IAIR program by guest curator Cecilia Alemani, curator and director of High Line Art, the linear park on an elevated railroad on Manhattan’s West Side that was co-founded by San Antonio-born entrepreneur Robert Hammond. Alemani is also the curator of Frieze Projects presented during the Frieze Art Fair in New York.