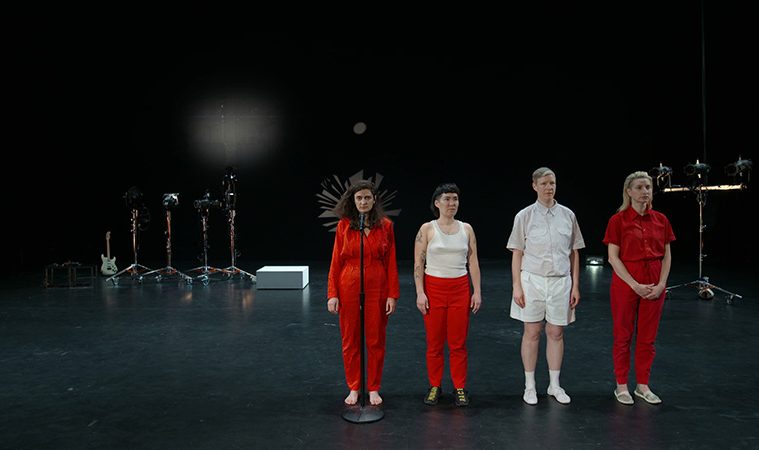 Telepathic Improvisation at the CAMH

The animating conceit of Telepathic Improvisation, a film by Pauline Boudry / Renate Lorenz and the centerpiece of their first U.S. solo museum exhibition of the same title at the Contemporary Arts Museum Houston, on view through Jan. 7, is that viewers are invited to “participate” retroactively in the making of the film. What’s more, this participation, enacted through telepathically communicating with the pre-recorded video’s performers, has political implications: “Within a contemporary Western context of political inversions, alternative facts, and mass surveillance, telepathy surfaces as a viable mode for future acts of radical solidarity,” writes exhibition co-organizer Mason Leaver-Yap, Bentson Moving Image Scholar at Minneapolis’s Walker Art Center, which co-commissioned the film.

Unlike Cher, what today’s video installation consumers apparently would do if they could turn back time is not take back those words that hurt you, but bring back, from 1968, the words of Ulrike Meinhof, who two years later co-founded the German militant guerrilla Red Army Faction. Excerpts of Meinhof’s writing provide much of the film’s spare dialogue as well as the exhibition’s original title, Everybody Talks About the Weather … We Don’t, but in the wake of Hurricane Harvey, someone must have decided to follow Cher’s lead. The new title instead emphasizes the film’s other key source, the late Houston-raised composer Pauline Oliveros’s 1974 score Telepathic Improvisations, which according to Leaver-Yap “sought to disassemble the hierarchies of traditional Western music and its distinction between musician and listener, choosing instead the equalizing form of group meditation. With no discernible rhythm, sound, or value given to the notion of virtuosic play, the 1974 score reconfigured interactions as forms of collective attunement.”

One might wonder how effective Oliveros’s disassembly was, given its reliance on “no discernible” sound and the stubborn popularity of music with distinctions between musician and listener. Or even how necessary: Don’t many “traditional Western” concerts chock full of discernible rhythm, sound, and even virtuosic play (and notions thereof) generate “interactions as forms of collective attunement,” both enforcing distinctions between musician and listener and blurring them with “equalizing” moments, as when performers urge the audience to sing along or fill in a verse. Or when they dive into a crowd, trusting they’ll be caught and buoyed back to the stage intact?

Still, while users’ mileage varies, group meditation is indeed a known form of collective attunement, so one can imagine the original Telepathic Improvisations generating some transcendent or at least interesting experiences. But Boudry / Lorenz’s version tries to dissemble the hierarchies between live interactions and what amounts to shouting at a pre-recorded TV show, with worse than lackluster results. “Close your eyes and send an action,” an actor in the film instructs. “If you see or hear your action appearing in the film, raise your hands as feedback to the performer.” No hands went up during my visit to CAMH; none of us wanted to take credit for our time-traveling “participation” in the regurgitation of vague leftish aphorisms or the occasional listless movements of pedestals and actors across a set that looked a lot like the gallery, which includes props from the film.

One, a giant pair of handcuffs, turns out to be a prop from another film, William Friedkin’s Cruising, which drew protests even during filming for its depiction of gay S/M clubs but is now loved by many gays, myself included. Maybe I subconsciously, telepathically willed that element into the show, giving Boudry / Lorenz and the cognoscenti another suitably chic cultural reference to tick off. Or, more likely, maybe there’s nothing approaching “radical solidarity,” the “politics of resistance,” or a “viable” response to our dystopian political climate in this indulgent snake-oil giveaway.