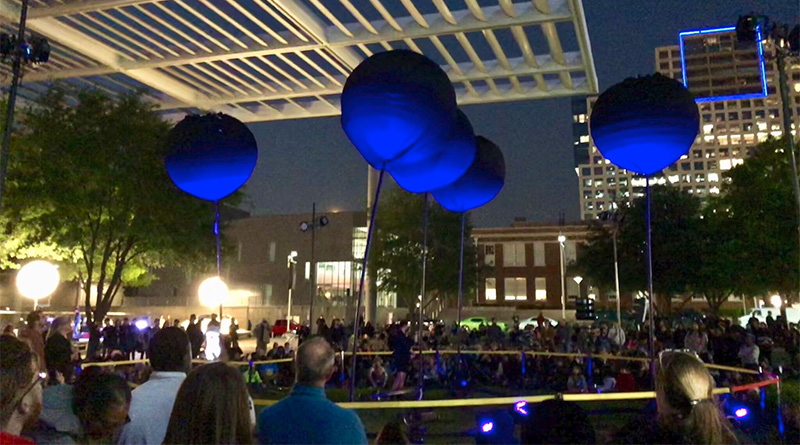 “Where are you going?” asked Dallas’s favorite classical DJ Amy Bishop, as I was heading straight into Meyerson Symphony Center, which would have been great had I been planning to go see Jaap van Zweden in one of his final concerts. “We are going to the opera,” she continued, laughing. “I was caught up in the flow,” I told her, trying to make her believe that I really did know my way around the Dallas Arts District.

Honestly, there’s just something wonderful about being on a street where everyone is walking to the theater. We were like an arts stampede. Earlier that same day, I had walked to the Nasher to see First Sculpture: Handaxe to Figure Stone and the Dallas Museum of Art to see the Edward Steichen mural paintings. Seeing Michel van der Aa’s marvelously trippy Sunken Garden at Dallas Opera concluded my “art on foot” day.

Just a few months back, I had a phone conversation with Dallas Arts District executive director Lily Cabatu Weiss, where she talked about “activating the street.” Block parties, outdoor performances, and the recent Changing Perspectives Block Party, headlined by Australia’s daredevils Strange Fruit, are all part of Weiss’s plan to get folks out and about. Her idea is that the Arts District should be more than a collection of theaters and museums; she also envisions the street as a performance space. “Dallas Arts District was aglow with Australia’s Strange Fruit,” says Weiss. “The chilly spring evening brought out the best of Dallas to party on the streets of the Arts District as the local talent turned it up to 11 and we continued the Arts Month celebration!”

Weiss, a legend in the dance world, wants to get people in motion watching others in motion. Judging from the photos, it must have been one spectacular event to encounter on foot. Weiss reports that audiences coming out of the Symphony and Winspear Opera House stayed to see the show. Of course they did, who could walk by dancers popping out of giant balloons way up in the air?

I am writing about arts pedestrians because I am one. I wouldn’t have it any other way. I live in the heart of Houston’s museum district; it’s a three-minute walk door to door to the MFAH, and about 20 paces to the new Glassell School of Art. Galleries, the CAMH, the Jung Center, Lawndale Art Center, Houston Center For Contemporary Craft, Asia Society Texas Center, and 4411 Galleries are so close that I don’t even need sturdy walking shoes to get there.

The fact that John Johnston of Classical Theatre called me during Hurricane Harvey to ask whether I could see if his Chelsea Market space was flooded tells you exactly how close I live to his outstanding theater. Ibsen, Chekhov and Shaw are in the neighborhood. And next season the edgy Mildred’s Umbrella moves into the Chelsea Market space. Not far from there, Stages Repertory Theatre reports that the proximity to great theater is one of the reasons people are moving into the neighborhood. And when Stages’s new Gordy complex is complete for the 2019/2020 season they will have three shows to see under one roof!

The livability of arts districts is another discussion; I sacrificed space to live in one. So, whether you can park once and visit many institutions or live in a designated cultural District, art engages us in a specific way on foot. Walking is contemplative. We process as we parade, although I have to say I wished that the walk home from Classical Theatre’s Richard III was longer. That’s a tough one to process.

There’s art we can walk to, and then there’s art we can walk into, which has been happening to me a lot these days. And most often, it also involves people just walking on by, they might stop, take a photo, most often they watch while they walk. Really, there are two audiences: those who read about the performance and show up; and those who simply wander by. I see this as part of the outdoor on foot art experience. Art works as a walk-by experience too.

This is why it’s so cool to have art in places where people actually walk! “Why are the trees wearing skirts?” I asked my early morning walking partner, after a quick jaunt through Hermann Park. When I ran into choreographer Lori Yuill and her pack of colorfully skirted dancers that next weekend, I was able to put the pieces together. Yuill was part of Color Bursting Hermann Park, created by Houston artists Tami Merrick and Nicola Parente, which was one of Houston Artist Alliance’s Bayou Trails project, a special creative placemaking initiative funded by the National Endowment for the Arts’ Our Town initiative, as well as The Brown Foundation, Wells Fargo, and the City of Houston. Yuill, an experienced site-specific choreographer, balanced blending in with standing out, just enough to marvel those walking by who might have asked, “Who are these dancers frolicking about in our park?”

Walking and wondering is good for the soul. The new Houston Arts Alliance CEO John Abodeely agrees. “Parks are about respite and nature, fun and family and community,” says Abodeely. “What’s great about this installation is that it gives the park a kick, makes it a little more fun and beautiful and interesting. It makes you look twice, and maybe see the park a little clearer for it.”

Austin got in on the pedestrian art action recently with Shadowing, a public art installation created by Jonathan Chomko and Matthew Rosier, where the street lights captured and projected shadows of those who walk by, so one is dancing with the last pedestrian. I liked that the project was interactive and utilized the city’s street lights, something we don’t suspect as part of an art experience. “Shadowing embodies our City’s love of quirky and unexpected experiences, and reflects our commitment to fostering innovation,” says Meghan Wells, Manager of the Cultural Arts Division.

We can’t talk about pedestrian art experiences without mentioning San Antonio’s Luminaria, which is designed from top to bottom as art to be seen for walkers, with art experiences in close proximity. The pageantry of Luminaria is epic.

And then there was the total and complete awesomeness of Laura Gutierrez’s Center Aisle Blues at the Fiesta Mart as part of CounterCurrent, presented by University of Houston Cynthia Woods Mitchell Center for the Arts in partnership with DiverseWorks and Fiesta Mart, April 12-15. Her presence was a delicate one, thoughtfully planned out to consider the shoppers and the Fiesta employees, many of whom got to know her over the past few weeks. “Genuine curiosity from the shoppers led to moments of memorable human and social interactions and ultimately unplanned aisles duets,” says Gutierrez. “I experienced a gentleness that I wish I felt more of in public places.”

When was the last time you saw a contemporary dancer waving to the fish guy in a dance? Imagine a dancer popping up in the produce department. Those in the store during her shows witnessed something so rare, so wonderful, so surprising, and all while shopping for dinner. She ends the piece in Fiesta’s parking lot, standing on her car in her glimmering jacket with its sparkling multi-colored streamers of fringe swirling in the wind, like a beacon of beauty and calm, facing the city that formed her. That’s some serious placemaking folks.