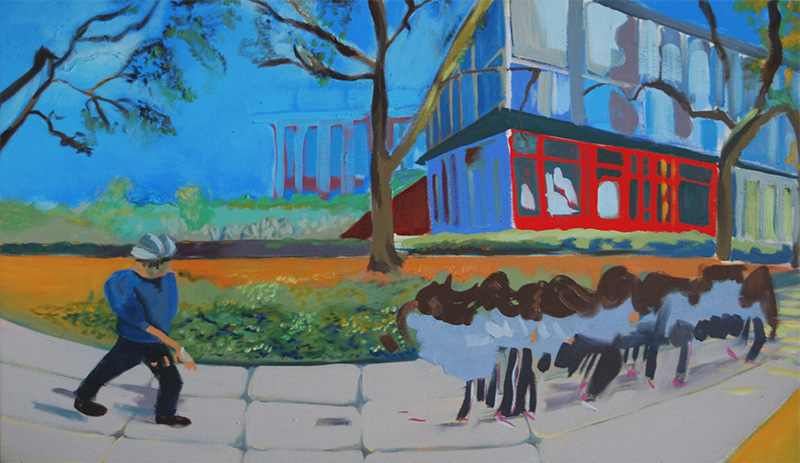 One recent Friday evening, my kitchen was filled with artists. Drinking, commiserating, and laughing, we all compared gigs.  A gaggle of our children zigzagged intermittently through the group. It turned out many of us were teachers, adjunct or full time. We’ve had jobs in retail, waiting tables, and dog walking. These are the vocations that fill our bellies and pay rents or mortgages, but we each also have our own small businesses—as artists. We produce ideas and objects, write grants and applications for shows, move and hang exhibitions, promote and lecture, act as jurors or sit on committees. In this role, we are never off the clock, and mostly we’re okay with that. You don’t sink thirty grand plus into a Master of Fine Arts degree thinking you’re going to get rich. But looking around that happy, boozy room, I imagine, that many of us have similar stories about that very real work being devalued. Not only do we have to do this work, but we have to justify it as labor. It happens early and often. My experience, which I’ll share here, is surely very common.

I grew up in Arlington, Texas. Sandwiched between Dallas and Fort Worth, Arlington is a giant geographic swath of suburban sprawl. Near the northern end of Cooper St—a nearly 13-mile straight shot through strip malls and traffic lights—is the University of Texas at Arlington. It was an early cultural oasis in my young life as an asthmatic kid who always felt a little like an outsider. My mother returned to college as an adult, becoming a serious ceramicist and later a high school art teacher. Late in the evening, my sisters and I would tag along as she tended the kiln graveyard shift. To my young mind, art was the one place where the only limitation was one’s own creativity. I craved it, both the making and the viewing.

After a few misadventures of my own, I returned to that University to work on my own Bachelors of Fine Arts degree in painting. It was around that time that I made my first serious foray into the life of an artist, working full-time as a server and spending every extra moment in the painting and printmaking labs at school.  At my restaurant gig there were a lot of college students, but few had any inkling of what a BFA meant. Some were surprised at the school workload when I explained that a studio class is six hours long but you only get three hours of credit. The worst assumed art was something you could only do while high. An acquaintance’s father gruffly responded to my college major with, “oh, that’s great if you don’t want to work hard.” I was so gob-smacked that I missed my moment for a witty retort. (That’s rich coming from the occupant of a La-Z-Boy) Later, as a graduate student, I (like every other MFA student) logged 60 more hours of college credit for my MFA, while most master’s degree programs require just 30.

It’s hard to blame people for their misconceptions. Our society is crazy in its stereotypes of artists. I’ve seen calls for artists that suggest “doing art just for the exposure,” in hopes of getting something for nothing. Think of the pitiful notion of the “starving artist” versus the mystification at astronomical auction prices. Don’t let those caricatures fool you. They each represent a tiny sliver of the working art world, ignoring the much more common “in-between,” the working-class artists that plug away at gigs by day and fill our “free time” with our all-consuming, fulfilling, but often frustrating second job. We love that job. We do it whether times are lean or rich. As an arts writer, I’ve spoken to several artists near retirement from their ‘gig’ that cannot wait to make their art full time. Like I did as a kid in the ceramics studio late at night, they crave it. They won’t stop making till the end.

But it’s time for all of us, artists included, to give our work the respect it deserves. Art work is work. This goes for all professions—not all things that generate money are worth doing (see David Graeber’s best-seller Bullshit Jobs), and simply because a profession doesn’t lead to wealth doesn’t mean that it’s not hard work.

Maybe the reason this is difficult to understand as it relates to art is that if you’re doing it well, to the outsider it’s experienced as pure joy, pure intellect, or pure truth. I know it can feel that way when I’m in the presence of good art—so effortless and essential that you can’t imagine how it hasn’t always existed. But I’m letting you all in on the secret, so you understand that every revelation is reached through toil, and I’ll say it again until it becomes a mantra: artwork is work.