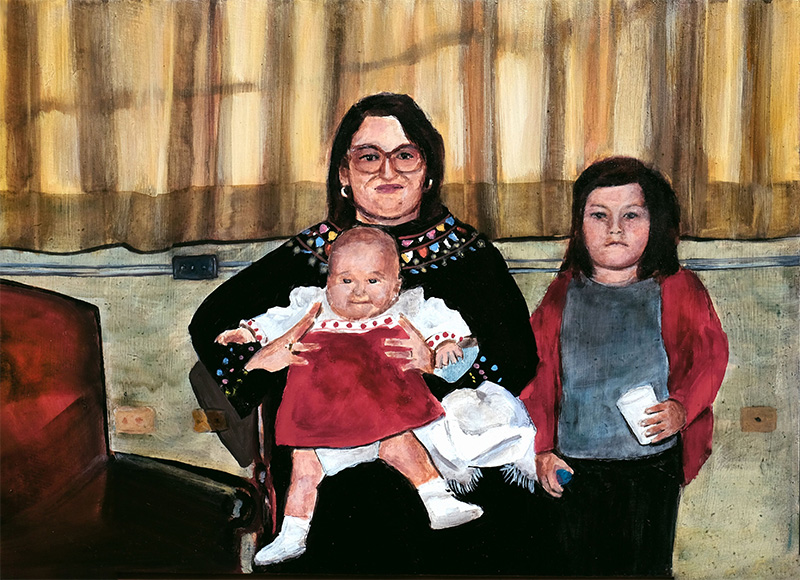 A friend in San Antonio once tried to give me a general sense of a location in the suburbs; she gestured vaguely and said, “four Home Depots that way.” It was funny because it was true—the ubiquity of national companies, strip malls and beige stucco has so neutralized the landscape across the state that it can be hard to tell one locale from another. However, San Antonio artist Ana Fernandez, a regionalist for the 21st century, finds that it’s really the people that make a place. More than any other artist in the city, Fernandez captures San Antonio’s je ne sais quoi. Rather than describing the urban landscape for its grandiosity or its banality, Fernandez looks for the human patina. “Do I want to paint a brand new row of track houses?” she asks. “Probably not. It’s still about the people living there. It’s more about the people that were there, and the traces that they left. It takes a while for it to get lived-in. I love history and I love knowing what things were before.”

Fernandez, whose painting Los Valles is in the collection of the gorgeous new Artpace-connected Ruby City, describes her medium’s tactility as its most appealing feature. “When you’re painting you’re actually touching the surface of something. There’s a lot of touching involved…it’s very material.” In 2018, the artist traveled to the renowned Skowhegan School for a residency, where she took up what is arguably painting’s most material form: fresco. Learning to mix plaster and pigment in the right combinations felt like a natural extension of her practice. “I like to see things in terms of material,” she explains. “I do feel like it’s a connection to the world,” she says. “It’s very analog.”

Perhaps, as I did, when you hear the word “fresco” you imagine the great murals of Western art—Da Vinci tinkering unsuccessfully with paint formulas or Michelangelo on his back under the Sistine ceiling, but Fernandez explains, “The era of big frescoes is past. I’ve been doing small frescoes that are portable.”

These include the paintings on found objects that the artist exhibited in late 2018 for her Artpace residency. Objects like Rear View, small frescoes mounted in place of and in conjunction with big rig side mirrors. They operate in a conceptual space that is both playful and poignant.

The paintings, highly cropped nighttime scenes that are more impressionistic than documentary, were paired with actual reflections in the gallery space. The familiar vinyl sticker, OBJECTS IN MIRROR ARE CLOSER THAN THEY APPEAR, has been removed, but we can feel its presence in these paintings, which seem to echo a recent yet irretrievable past, an ever receding wave that leaves us stranded with longing. Fernandez doesn’t get bogged down by nostalgia though, “Yeah, [the city] is changing. I’ve been keeping to myself. I’ve always felt like San Antonio is really creative. It’s private.” she explains. “I like it better now that there’s more people.”

Perhaps it’s no surprise then that Fernandez has of late turned her brush to portraiture. Nuestro Hogar, an exhibition of Fernandez’ paintings at Houston’s Jonathan Hopson Gallery, featured portraits and smaller scale “landscapes” of a sort—intimate images of home interiors—rendered in the artist’s confident strokes. Portraits have “that intimacy,” she says, “the face, the microexpressions. When you’re painting a person’s face, any little movement that you make can change that person’s expression. It’s just a series of little tiny brushstrokes…it’s almost magic when it works.”

For someone with such a deep connection to the physical world—the world of painting and the world of food: the artist also runs the popular Chamoy City Limits ice cream truck, which doles out Tex-Mex favorites and highly-stylized raspas— Fernandez is utterly unthreatened by the digital revolution. She describes the “flip” that’s taken place in recent years whether one is selling art or food. For “advertisers, it’s a figure and ground relationship.” She explains, “The figure is the ‘coke’ [for example] that image they want to sell, and they create chaos in the background. The figure ground relationship has flipped. They [Instagrammers] just want to be the figure…you have to let young people be the star.” She laughs, imagining a glut of selfies crashing a server.

“Images are cheap now, which is why I like painting even more. It’s way better than a photo. That’s why I think there’s going to be a real swing back.” In a landscape that seems sometimes shrunken and homogenized by commercial architecture, or photo-filtered to perfection on digital apps, regionalist painting takes on the heroic task of reminding us that the real world is still large, weird, and wonderful.