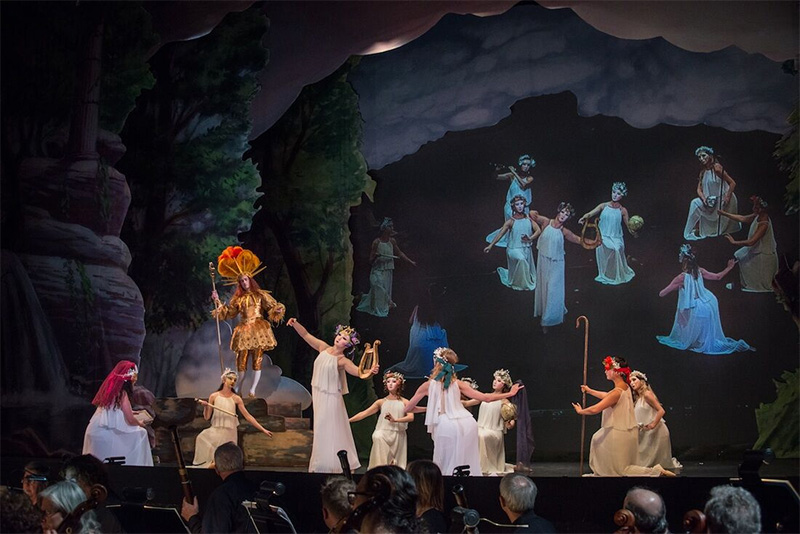 Search for information on baroque dance and it won’t be long before you come across the name Catherine Turocy. Co-founder of the New York Baroque Dance Company, launched in 1976, she’s the leading American expert on the period from the mid-17th to the mid-18th century that bridged the social dancing of nobles in the Italian and French courts with the invention of romantic and classical ballet. The beginnings of baroque dance are tied to the crowning in the 1660s of Louis XIV, who spent as much time on the dance floor as on the throne. He was the first to commission a notation system that in part makes Turocy’s work possible.

Based in Dallas, where her husband James Richman directs the Dallas Bach Society, she has been mounting productions of opera-ballets and other baroque genres for more than 40 years. Her work as a dancer, researcher, choreographer, director and reconstructor is in demand from New York to San Francisco, Havana to Paris. She has been named a Chevalier in the Ordre des Arts et des Lettres by the French government.

“Looking back at history, what is art and what is ballroom dancing?” Turocy asks in an interview at her home in Dallas’ Lakewood neighborhood. “Today, there’s a clear separation between the two. For instance, if you go watch New York City Ballet perform, you probably won’t be using the same moves at the disco afterwards. But I don’t think it mattered in the 18th century. Ballet steps like the demi-coupé were used in the popular dancing of the time. The difference is intent. When you’re dancing at court, it’s a social event. When you’re going to the theater, you’re expecting the dance to be in the context of a drama.”

Last September, Turocy and her company collaborated with the early music ensemble Ars Lyrica Houston on “Dancing at the Palais,” a performance of instrumental suites from André Campra’s tragic opera Hésione (1700) and Jean-Philippe Rameau’s opera-ballet Les Indes Galantes (1735). Both originated at Paris’ Palais-Royale, built by Louis XIV. She reconstructed the Hésione choreography for her dancers from notations; Galantes required her to create new movement based on the period style, “because no one wrote it down.”

That was often the case, even after Beauchamp-Feuillet notation was first devised in the 1680s. In the baroque world, music composers and the librettists who came up with the story ideas were the name talent, with the choreography sometimes created by the dancers who performed it. Turocy is interested in bringing attention to this individualistic way that dance operated in the baroque era.

“You have to understand I first began as a performer, and I wanted to know more about how did they think about performing,” she explains. “I got excited about the idea that there’s a certain integrity and independence to the performer as an artist. The dancer is not a tool. The dancer has their own style within the style of baroque dance and their own responsibility to communicate. How do you perform in order for the audience to have a cathartic experience? How do they prepare their own dramatic persona to appear on the stage? As the dancer, you are always connected to a larger world. You’re never alone.”

Baroque dancers often wore masks. Turocy collects them for use in her pieces. They fill drawers in her home. “You put on the mask, and it’s not to hide who you are,” she says. “It’s a way of creating an iconic image. You feel a difference between just yourself being exposed and being that character. You’re able to bring much more strength to your performance through the mask.”

Her next big project is Scylla et Glaucus, the only opera by French violinist and composer Jean-Marie Leclair. It will be fully staged in April by the Philharmonia Baroque Orchestra and Chorale in San Francisco and then at the Royal Opera at the Palace of Versailles, which served as the king’s main residence beginning with Louis XIV.

She’s also researching Nijinsky’s unfinished Sarabande from 1913, the same year he created The Rite of Spring, for the  Center for Ballet and the Arts at New York University. Long term, she’d like to design a 360-degree planetarium show built around baroque dance and the Greek philosophy of the harmony of the spheres.

Like many people who become choreographers, Turocy began making dances when she was a small child. Growing up in the Cleveland suburb of Orange, Ohio, her sister played the piano and her father was a violinist, though not a professional. After high school, she had to decide whether to go to college or move to the dance capital of New York. Because she had always wanted to have her own company, Turocy chose to further her education in music, language and history so she could become well-rounded. She wound up at Ohio State, where professor Shirley Wynne was researching historical dance. She joined the school’s Baroque Dance Ensemble as well as its modern dance company. The ensemble moved to Santa Cruz, where Turocy joined them after graduation. But soon the group broke up.

Relocated to New York, she began presenting both her original modern dance and reconstructions of baroque choreography. It was the early 1970s, the age of postmodern dance in the wake of Judson Dance Theater’s “no spectacle” philosophy. At the same time, interest in Renaissance dance and in baroque music had been surging for a decade, and books about the baroque period were being reissued. Turocy gravitated toward the beauty of the historical.

“I was really called,” she says. “I love the music. I love the costumes. I love the fact that there’s usually a narration going on through some kind of storyline even though at the time Merce Cunningham was all the rage…Dance was very celebrated, it was the golden age of dance in the 18th century. I like the idea that there’s this shared aesthetic between music and painting and dance that tells, in its own way, whatever the story of the ballet or the opera is. Because if they’re all sharing the same base, then dance is as important as any of those other arts.”