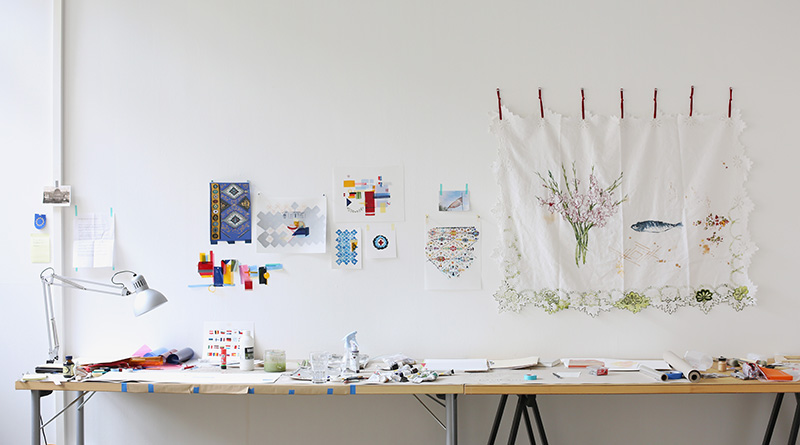 Diana Antohe’s studio during her 2017 residency at Künstlerhaus Bethanien in Berlin, Germany.
Image courtesy the artist.

It would be facile to attach the “immigrant artist” label to Romanian-born, Texas-raised artist Diana Antohe.  Such narratives serve only to ignore the talent, thoughtfulness, and creativity of the young artist.

August marks Antohe’s completion of a residency at the Küenstlerhaus Bethanien in Berlin that began in July, sponsored by Mercedes Benz Financial Services—her fourth residency in 2 years. She is primarily a painter, working with acrylics on medium-to-large sized canvases with a focus on geometric shapes, deep colors, and a compositional eye for symmetry.  She graduated from Meadows School of Fine Arts at SMU with a Bachelor’s in Fine Arts, and has shown in several exhibitions since 2010: Yale School of Art in 2012, as well as Dallas’ Beefhaus and CentralTrak, in 2013 and 2015, respectively. Recently, she’s turned her attention to working with fabrics, stitching together delicate fabrics given her by her grandmother, channeling their sentimental value into raw but clear expression.

She became a naturalized US citizen during her last semester at SMU, and part of the process involved the renunciation of previous allegiances. “It’s such strong language,” she says of the oath-taking, “and even though it might be a formal thing,” she admits, “it really just kind of rattled me, and it caused a shift in my work where it felt important to start declaring my attachments to the culture of my upbringing through my work.” For example, On Oath (2014), is a large mixed media piece that has the appearance of a map with four perceivable masses of land connected somewhat by a triangle in the middle.

Antohe spent the bulk of her formative years in Dallas, Texas, which is why the state’s unique outline features prominently in the piece. The lines squiggle and fade like cartographic borders physical and political. The coloring is understated and sporadic, as is the texture; photos and color-fields reminiscent of sticky notes and miniature Polaroids have been applied perhaps to highlight moments specific to her experience, or they pertain to the aesthetic of place that anyone could see on a postcard. Stars and random patterns as well as minimal text also features. It’s a busy work of art, but such is the nature of constant movement.

The summers spent in Romania with her grandparents, and the places her work have taken her have had a profound impact on her work and how she works. Because she spends much time traveling, Antohe has worked with fabrics because they are practical and immediate. “I wanted to avoid shipping things back. Like, it’s either expensive or troubles with customs. It ended up in the past year that I’ve been using more fabrics since I could fold them and put them in my suitcase.”

It’s her own roving artist’s studio, but she also admits to being inspired by where she ends up in surprising ways. In particular, she speaks of a residency in London last August. “I ended up making things there that I wouldn’t have made if I hadn’t been in England in that environment with the Olympics happening and the Brexit decision still feeling very fresh. Sometimes it’s the subtle things that you end up finding new materials when you’re somewhere else, but also being in a completely different environment and being able to kind of reset your routines in that way for that specific duration.”

Timeline is an installation composed of hand-stitched bunting in front of Camden Arts Centre. On the surface, the piece seems an innocuous presentation of flags you’d see at any event celebrating national holidays or multicultural events, but the concept was executed on a personal level for Antohe. “I woke up one morning and realized that I have this specific timeline of citizenship and nationalities that had enabled me to travel or live for short periods over time, and thought, ‘I think I need to make bunting.’” The flags represent a rough timeline of her travels and milestones, be it her formative trips back home, her studies or the attainment of US citizenship. “It’s this fun, awkward thing, because there’s weird gaps between them instead of the regular, even spacing.”

These themes recur throughout her work in nuanced, self-aware ways. It’s a sensitivity to one’s environs that stresses connectivity, and a personal relationship to the world at large. Antohe knows the journey is important. It’s exciting and fun, but the work that comes from it is a beautiful record of where the artist has been, and where she is going.