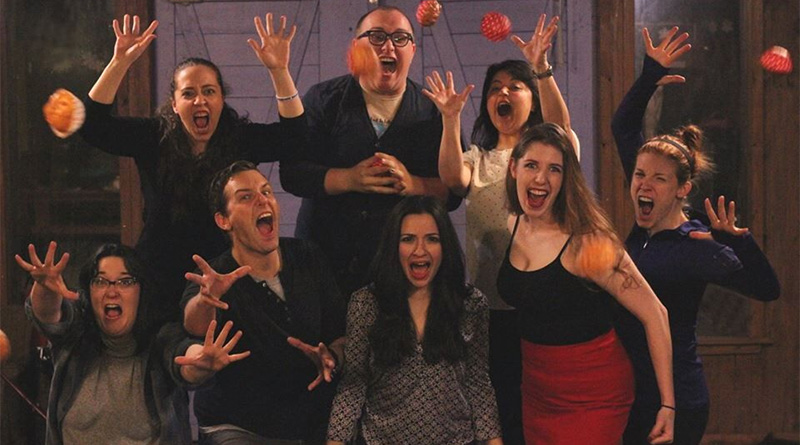 Elizabeth Keel, a born and bred Houstonian, is unlike most theater kids; she didn’t grow up wanting to be an actor.   She was always interested in writing but didn’t catch the theater bug until her senior year in high school, when she saw a production of Noises Off at the University of Houston and sat in on a Shakespeare lecture by Dr. Sidney Berger.

She started at University of Houston in 2004, studying English and pursuing the Acting/Directing track at The School of Theatre & Dance. While there was no official playwrighting program at UH back then, Keel signed up for every relevant class and workshop she could, including a course by playwright in residence Lanford Wilson in 2007. This produced her first play, a farce called Shanghai about a family unit who kidnapped celebrities and ran an elite resort/fortress where, for the right price, you could meet the famous person of your dreams.

Keel graduated in 2009 with a BA of Theater in Acting and Directing, knowing full well it was writing that she intended to pursue. Those acting and directing classes came in handy over the next several years, as any theater practitioner will tell (warn) you, the best way to get your work produced is to roll up your sleeves and do it yourself.

Post graduation, almost all of Keel’s friends moved away to make it in the big theater cities; New York, Chicago, Los Angeles, leaving her feeling very alone. She applied to several graduate programs but did not get in. Without the educational structure she had been in for so long, this self-described nerd didn’t know what to do with herself. She cast around for jobs that might involve writing or theatre, or ideally both. She began writing her first novel. She put her nose to the ground.

She got hired as a teaching artist at the Alley Theater and by Writers in the Schools (WITS) to teach creative writing. One thing Keel values about teaching at WITS is the freedom from test-based teaching. “Nobody’s worried about grades,” she says of her WITS classes. “Instead, we give the kids the time they need to interact with language and build their confidence. It is so important to me that my students see that it is safe and feasible to make changes.”

She fell into teaching but immediately realized how rewarding it is and how it could stimulate her own writing. Just being around students learning how to play with language and experimenting with words gave her the inspiration and motivation she had been seeking. She gave up on graduate school, but would not give up on Houston.

“I love it here. I respect all of my classmates who moved away, but I wanted to double down and help build up this community, for us. On average, I see 75-80 shows per year. And the best part is, there are more shows that I don’t see! This is a great town for theater.”

The way that Keel refers to the Houston theater community as “us” is telling.

Over the next six years, while teaching and on top of seeing an ambitious amount of theater, Keel wrote two novels, several short stories, produced several plays and in 2013 became the Artist in Residency at 14 Pews. While at 14 Pews, she wrote and produced three plays, The Rainbow Lands, Psychic Palace, and Deborah. Her work has been seen at Obsidian Art Space, Cone Man Running Productions, Landing Theatre, Mildred’s Umbrella as well as in College Station and NYC.

When the opportunity arose to return to UH for a graduate degree, she decided to take it. Keel began work on her MA in Theater Studies at the University of Houston in the fall of 2016. The title of the MA is ambiguous and Keel admits she has warped it into as much of a playwrighting program as possible. Although there wasn’t one when she was at UH the first go around, there is now a playwrighting undergrad degree, which Keel inserted herself into as much as possible. Once again she found that being around people learning and practicing the same craft as you is inspiring.

While studying the second time around Keel honed in on a specific area of playwrighting and named her thesis accordingly: Science Fiction Onstage. This type of theater has specific challenges, which is part of what Keel says she loves about it. “Film and television have CGI. Theater has to be far more creative with its staging and design to pull off its effects. But in return, we have the live intimacy,” she says of the genre. Keel admires the size and scope of sci fi, is interested in world building, and appreciates the relevant dialogue happening both on the surface and the subtext.

On how her view of the audience affects her writing, Keel says “The audience has to be held responsible for their own imaginations. They are capable of more than passively watching. I have faith that they can keep up and contribute.” Challenge accepted.

When it comes to the actual practice of writing, Keel fits into the “productive procrastinator” category and must therefore write away from the distractions of home. Houston area coffee shops reap the reward. She feels superstitious about which coffee shops are appropriate for what kind of writing and says it feels like the cafés themselves dictate which she will use for each project. The mysterious and mystical communication between a writer and the cafés she frequents for writing, that’s pretty magically mundane right there. She also admits to working out bits of dialogue aloud while driving, she’s not talking to herself, she swears!

Graduation is around the corner and Keel has sworn off future studies. With school out of the way she’ll have more time to write and produce and get back to her goal of doing what she can to make Houston’s theater scene better. I asked her how important it is to have work produced in other cities. “I love the idea of traveling for my writing,” she responded, “but Houston will always be home. My goal is to do the best I can from here, and anything else is gravy.”