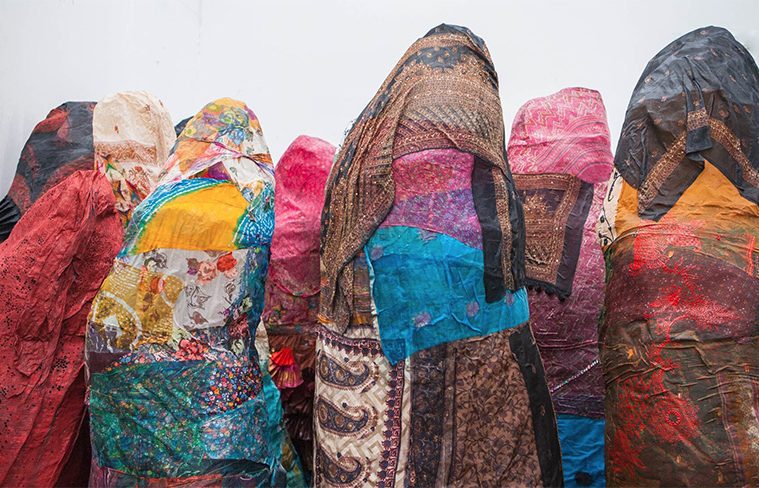 Preetika Rajgariah will spend much of the remainder of 2018 travelling so I was lucky to catch her at her home studio in Houston that she shares with her partner, Lovie Olivia. The best part of visiting home studios is how artistically alive they feel. Olivia was home and painting in the kitchen the entire time Rajgariah and I chatted in the living room. Their space is filled with the works of both artists, and Rajgariah’s colorful and richly saturated fabric based sculptures floated over us from their spot hanging on the wall as we sat facing each other on the couch. Rajgariah frequently reached out to touch them and reference them during our conversation, which was much cooler than the normal white board that graces daytime office meetings. 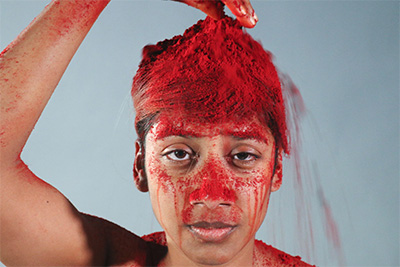 Rajgariah did a five week residency at Ox-Bow in Michigan ending in September, following which she had a show in Chicago. She is back in Houston for the month of October teaching a four week course on painting with fabric at Art league, and then will be gone again for a month visiting family in India.

Rajgariah was born in India and frequently makes the trip back, at least once a year. All of this away time is leading to some heavy Texas time when she gets back though. She has two solo shows to prepare for in Houston next year, in May at Lawndale Art Center and June at Art League, and another in October at Women and Their Work in Austin.

Rajgariah formerly classified herself as a painter, but recently finished her graduate degree at University of Illinois Urbana-Champaign (UIUC) where her approach to art radically changed. This was a purposeful redirection. After living in Houston for almost her entire life, and going through all of the ups and downs that span of life entails, she knew she needed to reimagine the way she did everything. When she got to UIUC Rajgariah found herself alone and in as different of a physical environment as could be. The landscape was different, the weather was foreign, and the student body (and the teachers)  lacked cultural diversity. She found herself educating everyone around her about her background, her diverse approach to art, and finally decided “her story is different and deserves to be told.” 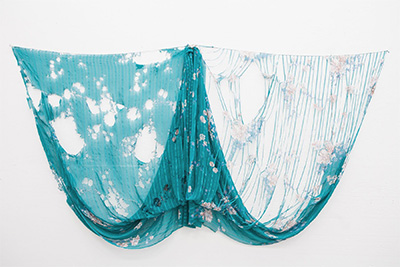 Preetika Rajgariah, what we keep, what we leave
teal sari – burned out

She asked her mother to send her her old sari’s and began a mixed media approach to creating work, repurposing the fabric into sculptures, using the brightly colored Sindoor powder in performative videos, all the while examining current dominant societal structures, often dealing with race and gender. “The materials I use now – common in my upbringing and culture – are in direct correlation with the content of my work. With painting – that link seemed to be missing,” she explains this new direction. “The feeling of otherness feeds my work, both my otherness within the Indian community as the child of an immigrant family raised in America, and as an ‘other’ in America, namely one with dark skin.”

Rajgariah finds adornment and decoration fascinating, both when traditionally used in Indian culture and as seen from an American perspective. She uses collage and sculpting techniques to both capitalize on and explore these themes, transforming the traditional and “precious” fabric of her mother’s sari’s into wall hangings and human-like sculptures that seem to breathe with their own life. She plays with addition and subtraction as well, using both bleaching and burning techniques, which reflect real life cultural practices in India. 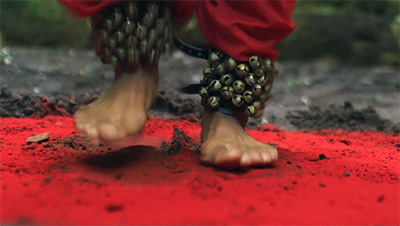 Her work isn’t completely removed from her former practice, either. She doesn’t use paint anymore, but says she still feels like she makes paintings. She uses fabric swatches like brush strokes, a ton of color, and the composition of her pieces is rooted in her painting background. The same can also be said of the performative videos she makes using Sindoor powder, a saturated and colorful turmeric based powder commonly used in India to mark a married woman, just one of the social expectations and standards Rajgariah wants to examine with her work. Although Rajgariah has only produced performative videos using the powder, she is interested in creating a live event using Sindoor powder because “it invokes many senses: that of sight, smell, touch. I am interested with moving into performance so that the viewer can get a better sense (literally) of this material and have their own engagement with it. Perhaps then it could become an access point for them, keeping them from feeling removed from the experience.”

It would have been easy for Rajgariah to capitalize on the connections she made at school and make the move to Chicago. She has already had several gallery showings there and feels a part of the community. But Houston was calling her, in a very large part due to the huge South Asian community here. She is excited to do work with and for that community, beyond what already exists both in Houston and nationally. “There is simply not a lot of representation of contemporary South Asian art out there. When South Asian culture is featured, it’s usually traditional folk and craft techniques or a music/dance festival – which is all great – but really represents an educational approach. I’m interested in moving beyond that and showcasing a more thorough examination of parts of my culture.”