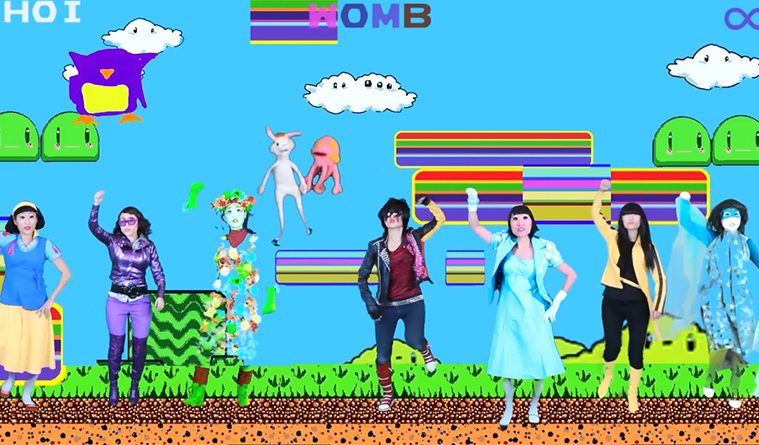 JooYoung Choi, Watson and the COS video still. 2015. Courtesy of the artist. 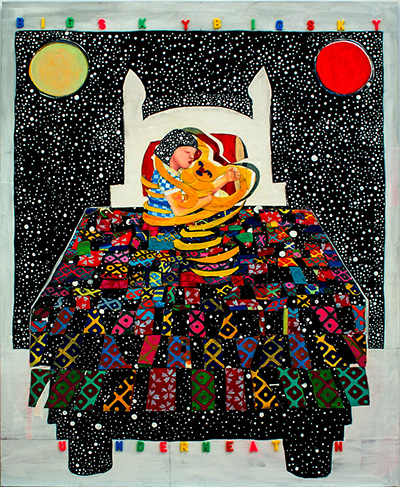 JooYoung Choi, It Helps to Know We’re Sleeping Underneath The Same Big Sky, 5X4′, 2015. Courtesy of the artist.

We often hear talk about how people around us spend a lot of time “in their own little world.” Generally, this expression just refers to people spacing out, detaching from reality for a bit, and ultimately returning when something requires their attention. For others, though, it’s just a step short of literal and at any given time, this is the point at which Houston-based artist JooYoung Choi stands.

Choi’s constructed world is a paracosm known as The Cosmic Womb, but it’s actually only one continent on a planet, the rest of which the artist has yet to explore. It’s a land governed by Queen Kiok, six humanoid creatures with special abilities known as the Tuplets, and one earthling from Concord, NH named C.S. Watson. The list of citizens in this world is far too expansive to detail here, but suffice to say that The Cosmic Womb is brimming with a colorful cast of characters ranging from these magical beings to animals (talking and otherwise) and that one, solitary earthling.

Choi, who just so happens to have grown up in Concord, NH herself, split much of her arts education between her two home countries, Korea and the US, ultimately earning an M.F.A. in Visual Art from the Art Institute of Boston. Through August 15, Houston-area arts audiences can see some of Choi’s work at DiverseWorks during their group show Parliament of Owls. For the show, Choi will not only display work but also create and contribute to the space throughout the duration of the exhibition. Choi’s work will also be part of a group exhibition at Houston’s Anya Tish Gallery July 17-August 22, where she will have a solo show next January.

Although much of Choi’s earlier work was spent exploring her own identity and how her adoption influenced/contorted it, it was her time spent in graduate school and Korea that shifted Choi’s practice into another dimension. 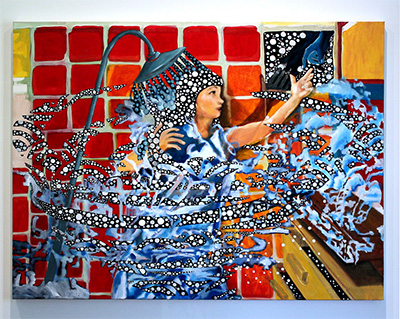 JooYoung Choi, To Fly Would Be an Awfully Great Adventure, 5X4′, 2015. Courtesy of the artist.

When writing about Choi and her paracosm, people often mention how surprised they are that she talks about all these characters as if they’re real people. In conversation, Choi jests that it must be like hearing kids at the nerd table list details about their favorite super-heroes, but it’s really not that surprising. Everything that happens in the world is carefully thought out; the narratives that Choi develops for this world are what fuel her work, and the ideas, memories, and thoughts that the characters are born from are a reflection of her own life.

This is most easily seen in C.S. Watson—the most direct portrait of Choi. Indeed Watson seems to be living an alternative timeline of Choi’s own life. Found in The Cosmic Womb near death, Watson serves under Queen Kiok as the official art historian, learning the history and documenting the goings on of the world. It doesn’t end there, though: The Cosmic Womb itself (and potentially the rest of the planet that houses it) is a multifaceted self-portrait of Choi and her life.

Haneul-Sek, one of the aforementioned Tuplets, for example, was born from Choi thinking about the tears of her adoptive parents, who were unable to have a second child on their own, mixing with those of her biological parents, who were unable to raise their daughter. Ideas like this bring the main characters to fruition for Choi, making them real to her, and it’s this dedication that people see and feel when she speaks about them.

It doesn’t hurt that she also spent her time at grad school living in her studio—in what she claimed at the time was merely an installation or rendition of what C.S. Watson’s bedroom might look like. When an artist spends as much time meditating on their own life and mixing in the power of mythology as JooYoung Choi does, how could a place like The Cosmic Womb not seem real to them? 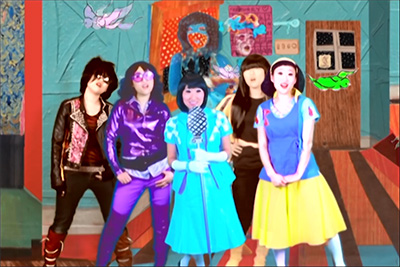 JooYoung Choi, Watson and the COS, video still. 2015. Courtesy of the artist.

The power of this mythology comes across fully in Choi’s work as she moves between video and canvas, with the results as different as the mediums themselves. In her paintings, Choi reimagines scenes from historic works and repurposes them to fit into the mythos of The Cosmic Womb. Combined with its citizens, they give off a vast range of displays; several paintings on display a short time ago at Lawndale Art Center, where Choi recently completed a residency, felt reminiscent of a scene from Alice in Wonderland.

For her video work, Choi has been experimenting with a variety of ideas as she tests out the medium. Some of her videos resemble old Sesame Street tapes, depicting Choi as Queen Kiok, Watson, and the Tuplets while the rest of the cast is made up of puppets playing the parts of the less humanoid characters. Aside from being incredibly nostalgic of childrens’ shows from both East Asia and the West, the videos offer a strong sense of the purpose behind Choi’s world.

Tying back into the playful narratives, she explores a variety of challenges that children and adults alike face on a regular basis, and isn’t that what those shows were all about? Through her work, Choi has found a better sense of self while meditating on how her adoption and two families have shaped her life, and now she’s sharing her created world with the world that created her.