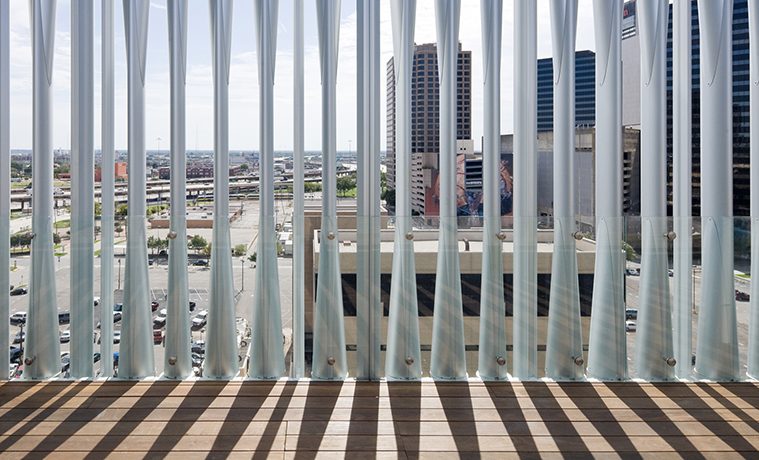 For as much good press as the AT&T Performing Arts Center (ATTPAC) has received, be it local or international, a persistent critique has still lingered in certain corners of the Dallas art world. If the venues were built for this city, why are they pricing out our city’s artists.

Well it seems as though the powers that be at ATTPAC have been privy to the complaining. Enter the Elevator Project.

Last night at a press conference at the Wyly Theatre, ATTPAC announced a new programming series they’ll be premiering this fall. Starting this August the Elevator Project will open the Wyly Theatre’s doors to six well-regarded local performing arts companies.

Over the next year Second Thought Theatre, DGDG: the Danielle Georgiou Dance Group, Cara Mia Theatre Co., African American Repertory Theater, Dallas Actor’s Lab and Upstart Productions will all present a show in the Wyly’s spaces on the sixth and ninth floor.

I don’t need to elaborate on the benefits of the program for both the artists in Dallas as well as its citizens. The professional programming ATTPAC’s resident companies deliver on a monthly basis is unrivaled, but a true arts city must support the local artists presenting original and challenging work, not solely the professional and touring companies.

With ATTPAC’s publicity machine amplifying their marketing efforts, these incredibly talented young companies and their artists will finally be introduced to many people in Dallas for the first time.

Productions and show dates are below. Individual tickets will be available beginning Friday, August 1 at 10 a.m. All six productions can also be purchased as a six-show sampler priced at $100. Tickets are available at www.ticketDFW.com.

Year of the Rooster by Eric Dufault (15 performances)

Gil Pepper has been stepped on by everyone around him.  Abused by his ailing mother, emasculated by his McDonald’s co-workers and taunted by his wealthy rivals…but he’s finally got an ace in the hole – Odysseus Rex – a rooster he’s been training since birth to be a fearsome killing machine. Now, for the first time in Gil’s life, he’s experiencing things he’s never had – hope, victory, and revenge. Contains strong language

Physicalizing the boundaries and testing the consequences of social mores, NICE,

is the fall premiere from Dallas-based dance theatre company DGDG: the Danielle Georgiou Dance Group.  Building on a body of meta-theatrical work dealing with femininity and pop-culture, DGDG launches into this new production that experiments with the social expectation of being “nice.” Through

highly aggressive and emotive dance, NICE breaks down the dangerous art of hiding our true feelings and motives.  Taking liberties with the audience/performer relationship, and demonstrating the real risks of performance, DGDG will entertain the NICE out of you.

A savage, acid-tongued new play by Mike Bartlett, one of the UK’s most exciting and inventive young writers, and the author of STT’s smash hit Cock. Razor sharp and blackly comic, Bull is a savage and insightful play about office politics or playground bullying, depending which side you’re on. Genuinely thrilling, daring and inventive, acclaimed playwright Bartlett probes the dark side of the modern workplace.

Set in the 1970s on the Texas border separating the United States and Mexico, Lydia is an intense, lyrical, and magical new play. The Flores family welcomes Lydia, an undocumented maid, into their El Paso home to care for their daughter Ceci, who was tragically disabled in a car accident on the eve of her quinceañera.