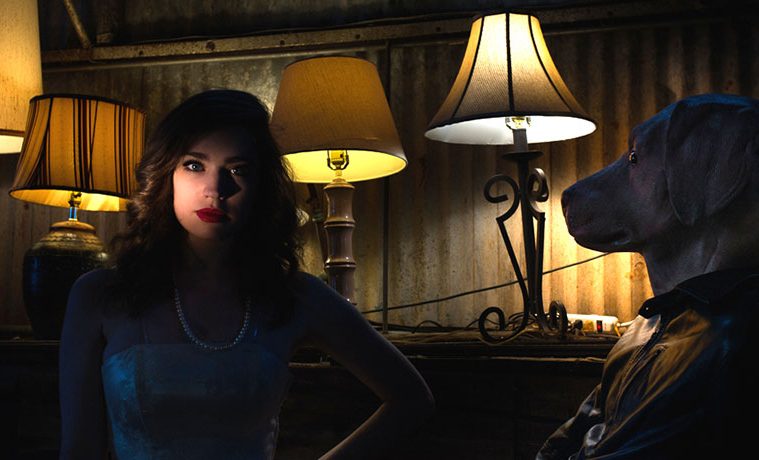 The Futility of Existence 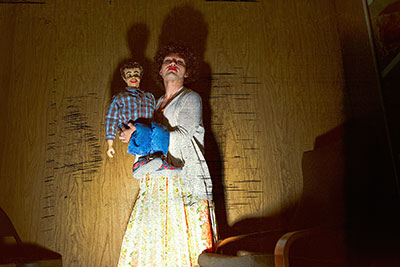 I find myself increasingly applauding artists whose work succeeds in creating a vibrant experience that isn’t easy to categorize, those responsible for creating art which happens in between a specific medium or practice. I also gravitate towards an artist who is capable of creating a self-contained world, a feat not to be undervalued.

That being said, I have a great admiration for the work of Thomas Riccio, a cross-disciplinary artist who, recently, has become more well-known for his work in the world of performance and theater, although he is equally at home in the gallery. His avant-garde acting troupe the Dead White Zombies have been expanding Dallas’ experience with theater since he launched the project several years ago, and KaRaoKe MoTeL (through Dec. 13),  his latest creation, is no different.

Set in an empty West Dallas warehouse, just South of the Singleton Bridge, KaRaoKe MoTeL takes the ubiquitous roadside motel as setting for the final entry in a trilogy of plays which have served as Riccio’s analogies for death, afterlife and, in the case of the present play, rebirth.

Audience members at the immersive KaRaoKe MoTeL are escorted into the ‘motel’ at one of three designated times. You enter together into what appears to be the motel’s office, 1970’s attired actors are engaged in listening to a tape on suicide and typing away on an early computer (so I can only assume we’re in the 80’s, although time is certainly fluid) respectively. Once the audience’s presence is ‘perceived’ the actors turn around and engage the audience briefly before pantomiming a melodramatic death, and rebirth sequence.

Exit audience. Next, audience members are escorted into the motel room of two lovers (Stephen Gardner and Alexandra Werle) by a housekeeper (Alia Tavakolian) with a thick accent. The destroyed motel room and languishing couple seem to be faced with the detritus of a drug-fueled weekend of lust and destruction that, as it draws to a close, has left them coming down and attempting to make sense of their withdrawal and their relationship.

After that, you’re on your own, at least until the conclusion. You’re free to wander in and out of a variety of rooms which feature, amongst other things,a slapstick lounge singer and pianist (the very successful comic relief), a fortune-teller and an eccentric ventriloquist and his/her dummy (Abel Flores, in another, wonderfully humorous performance). It’s choose your own adventure, kind of, and while some audience members on opening night seemed to be under the impression it was an ‘interactive’ show, the actors themselves seemed to be on various pages as to whether or not they should interact with the audience, or ignore them. Might be pertinent to remind audience members at this juncture in our cultural experience that ‘immersive’ and ‘interactive’ are not one and the same.

It’s fun, or at least titillating, but since I saw the show I’ve been wracking my brain in an attempt to remember anything, any word or line of meaningful dialogue that took place between characters. I’m familiar with Riccio’s style but in my previous experience with his plays (which has not been limited) there has always been, at the very least, a lucid narrative carrying the play from beginning to end. Not so in KaRaoKe MoTeL.

I found myself wandering back and forth between rooms feeling as though the actors had not a line of dialogue committed to memory. By necessity improvisation would play a role in a play in which, on occasion, actors are performing for no-one, but, it would seem, that a play about rebirth would also see that theme evidencing itself in numerous ways throughout the play’s disparate situations.

Credit where credit is due, the world which Riccio has created for KaRaoKe MoTeL is masterful. As we have come to expect of him, the artistic vision is beyond well- executed; details such as the blurrily looped video on view behind the motel room’s lovers adds eerie atmosphere, creating the haunted house feel you expect from a play set in an abandoned warehouse.

All the requisite characters were there; the housekeeper, the lounge singer, the couple; all of the hollow characters that inhabit the dingy motels of our American mythology where anonymity is currency and rebirth is always sought, but rarely found. But I found myself sitting and standing in turn, never quite glimpsing the potential either for myself, or the characters surrounding me, to serve as a prompt towards ritual or contemplation.

Absurdity is certainly a language in which to tell stories, and often, it’s a very useful language. But KaRaoKe MoTeL wasn’t that. It wasn’t absurd, and it wasn’t meaningful, it sits somewhere in the middle of the two, which makes the play’s dragged out conclusion feel forced despite the overwhelming feeling that you are supposedly witnessing something important.

There’s a hint of a theme in the sheer repetition of things; actors repeating meaningless words or actions, but it’s the depressing repetition that accompanies a futile existence, whereas rebirth is something I typically associated] with hope and potential, and if that indeed was the intention, we could have cut the time we spent inside the warehouse in half.

Maybe it’s just me. I’m quite certain fellow audience members were having great fun on opening night and there is certainly a talented group of actors equally adept at comedy and pathos to make your evening fully stimulating, but I wanted something more. The motel is highly symbolic in not only American, but Western culture as a whole, and Riccio would have been wise to more fully tease out the boon of ritual and symbolism inherent in his setting in the service of his intention.