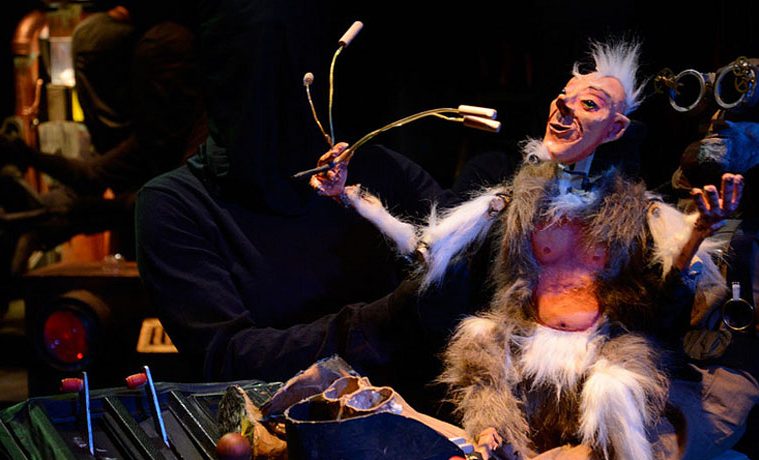 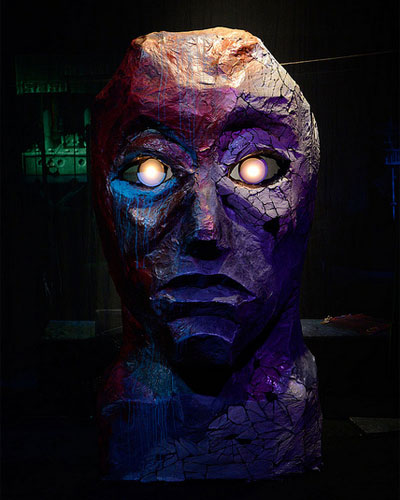 While the audience found their seats and engaged in casual pre-show conversation, an enormous decaying head with luminous eyes gazed at them from the stage like a contemporary Olmec. His skin was cracked and rotten, and he didn’t appear particularly happy about anything. Trouble Puppet’s The Head, written and directed by Connor Hopkins, is an exploratory work that invites us to peer through his melancholic retinas to observe the otherwise invisible processes that drive and derail a man in decline. At the sound of an ominous, droning tone, the head is shuffled off stage to reveal the personified brain within.

It is only natural that our brains resemble steam-punk, mad-scientist laboratories composed of leftover props from a Nickelodeon children’s program that was canceled for inspiring too many nightmares. Glowing tubes report neurotransmitter levels in a control center with the words SERO, MELO, and DOPA. In the center of the lab, a large bellows rises and falls, like one half of a bandoneon, perhaps representing the brain stem. Off to the side is a brass engine fueling the Head’s conscious awareness.

Front and center sits the star of the show, the Mechanic — not the “I”, but the integration of all the parallel processes that constitute conscious awareness. This is tiresome and thankless work. As such, the Mechanic sits at his command center, a small circuit board representing the prefrontal cortex, flipping switches on and off like an underpaid and overworked government employee.

The Mechanic is not the sole citizen of the brain. To the right of the command center is an ominous gateway to the darker regions of the mind from which emerge various demons, coping mechanisms and complexes, each of which has a unique posture and style of motion. One in particular, a personal demon named “And Furthermore Fuck You,” moves with such predatory grace that it was hard to believe that he was controlled by multiple puppeteers.

And Furthermore Fuck You’s physicality is contrasted by a coping mechanism in the form of a chicken named “Why the Fuck Not.” Initially Why the Fuck Not formed to help the man get out of an unhappy relationship and learn more about himself. However, Why the Fuck Not developed into a semi-autonomous entity that promotes drunk driving and enjoys defecating all over the Mechanic’s circuitry. Why the Fuck Not struts about in discrete, avian jerks. 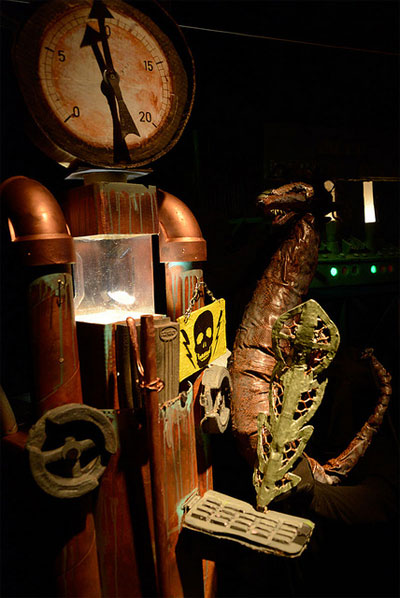 Perhaps the most stunning physicality belongs to a personal demon named “Shameful Perversion,” a bipedal serpent with a penchant for penetrating anything and everything with an orifice. Whenever Shameful Perversion would select a new hole, his slithering would swell rhythmically then dissolve into a brief post-coital torpor.

Despite the onstage chaos of buzzing demons and circuitry, there is an astonishing degree of behavioral consistency. For instance, tasteful use of fog machine and lighting by Megan Reilly gives rise to an illusory sea in which certain entities swim freely and which certain others must circumnavigate. Mechanic always relies on some system of transport to travel from one region to another, be it pole vaulting or his roving wheelchair. Despite the seemingly arbitrary nature of multitude of buttons and levers abounding in the laboratory, the Mechanic interacts with them very intentionally and always in accord with the present behavior of the man.

The Head depicts the Mechanic’s typical day at the office. The methodical way he goes about his daily duties of initiating wake-up sequences, monitoring dream activity, and controlling movement comprises a fascinating tale because the man is no saint. The body they all inhabit is that of a depressed alcoholic. He wakes up in a hangover, he dreams of impending torment, and his movement is violent. The Head does not ask why, but rather, asks  how  melancholic conditions arise amid the mundane.

Importantly, the mutinous demons —a swarm of black birds— characterize clinical depression not as a discrete entity, but as a diffuse mode of operation. The Mechanic’s daily tasks are simple, and if he could complete them all with focused attention, the man would have a healthy disposition. However, the demons and complexes usurp his sense of agency, and the sum total of small tasks left unfinished or poorly completed is the feed calling the black swarm to roost. 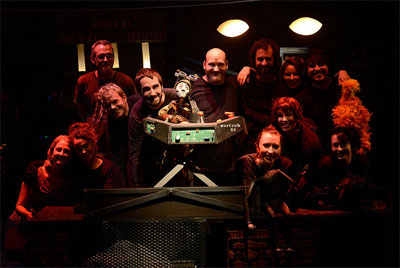