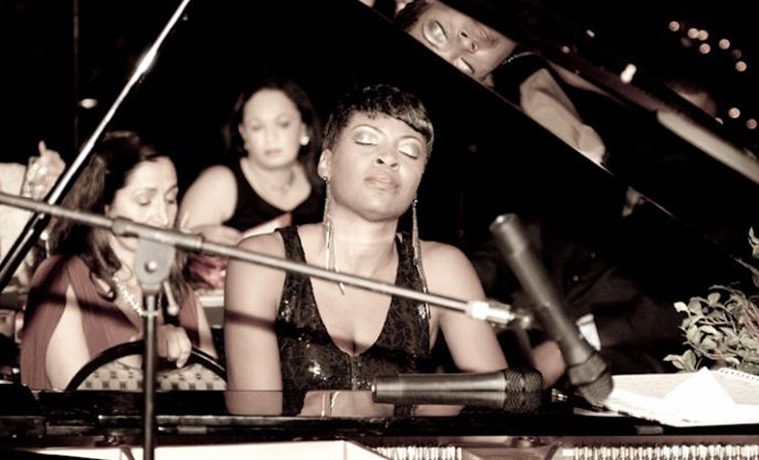 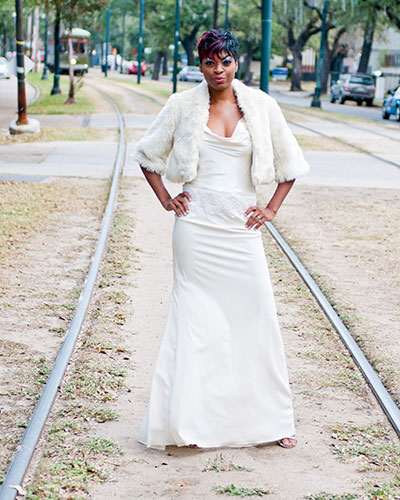 If SXSW were to showcase a classical pianist, it would have to be Jade Simmons, and it is, as she has been invited to play at the storied festival, which takes over  Austin, March 7-16th.  Simmons’ SXSW showcase is on March 14 at St.  David’s Bethell Hall. Lucky for Houston, there’s a preview on March 10 at Frenetic Theatre.

Known for her jaw-dropping virtuosity and eclectic programming, Simmons is devoted to expanding the boundaries of classical music presentation, which is why her repertoire spans Rachmaninoff to Rap. The renown pianist has played at the White House, web hosted for both the prestigious Van Cliburn International Piano Competition and the legendary Tchaikovsky Music Competition, created the Emerge Already web series, and was featured on Essence Magazine’s first-ever Style and Substance List, alongside First Lady Michelle Obama and Gold Medal Gymnast Gabby Douglas. And that’s just a sampling of the  accomplishments of this genre defying artist. Simmons visited with A + C editor in chief Nancy Wozny on Rachmaninoff, rap and her big gig.

Arts + Culture TX: I’m not remotely surprised to find you playing at SXSW. It was more a matter of when than if.

Jade Simmons: Truthfully, as popular as it is, SXSW or any other mainstream festival wasn’t on my radar even two years ago. But when I committed to really stretching the limits of what I wanted to do and who I wanted to reach, I had to aim farther and farther outside the realms of classical concert halls and even “alternative classical venues,” like clubs and museums. When I applied to play, I had to change the way I pitched myself and I had to prove that I had already been making waves in the world I was coming from. 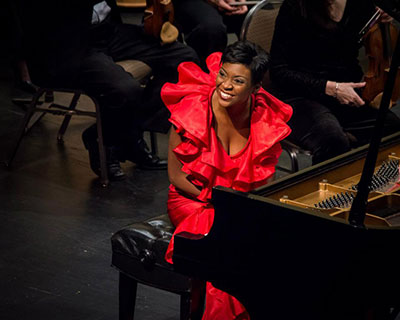 A + C: I’ve always considered you like a fabulous lady drummer, it’s just that your drums come in the form of a Yamaha acoustic grand piano. Agree?

JS: Yes! In fact, I’m extremely grateful Ft. Bend Music Center will be bringing in a Yamaha for my Frenetic preview and I’ll have one in Austin as well! I’m addicted to all things rhythmic, and my first instrument was probably a set of African drums lying around my childhood home. At SXSW, I’ll play along to an old Olatunji recording my dad used to listen to almost everyday. Even in classical, I’m drawn most strongly to highly rhythmic repertoire. For me, Sergei Prokofiev is the king of momentum. In all of my performance projects, there is usually an emphasis on rhythm and a deliberate exploration of the more percussive side of the piano.

A + C: How did you select the program?

JS: Well, I didn’t want to just show up at SXSW with my Beethoven scores tucked under my arm. If I was going to be the rare classical artist granted an invitation, I want to actually sound like something rare! Classical has been trending towards trying to be more progressive and we’ve taken “our music” to “other” places outside of the normal hall. But we haven’t necessarily stretched either a) what the music can do, b) how it can be presented, c) or how we perform it. In 2012, after a few years of playing edgier classical works that hinted at other genres, performing alongside electronics and dabbling in improvisation during my concerts, I taught myself to rap and created a concert project that spanned my favorite classical composers all the way to rap with the through thread of rhythm.

A + C: You are a self-taught rap artist. You must add that to your bio. Love it. Go on.

JS: I know it sounds crazy, but when you look at it, it’s not such a far-fetched progression considering my love for rhythm, for public speaking, for vocabulary and for beats. For SXSW, instead of just playing along to prerecorded beats or even having a collaborator onstage, I decided to add the new challenge of producing my own electronic beats live on stage…while playing piano…while rapping! I will do that all in a new piece I wrote called Black Beethoven.

A + C: That I want to hear. But talk about your growing comfort with the Rachmaninoff rep.

JS: Rachmaninoff is my favorite composer. Everything delicious, scholarly and musically satisfying is in his music, from lush harmonies to exciting passage work to the deepest and most subtle of human emotion. Finally, after years of having it on my to-do list since I was a little girl, I got around to learning his infamous Prelude in C# minor. I’m so obsessed with the piece I wrote a set of Electronic Improvisations using the tunes from the Prelude. I will play several of those at SXSW.

A + C: I hear you are doing an XX cover using loop pedals and a prepared piano. Your Rice professors will be proud.

JS: That’s what’s so awesome, my very classical professors are very proud and have made an effort to tell me so, which is much appreciated. I was just invited back recently to speak to music students about my colorful career thus far. But about The XX, In my car, I have Sirius XM, my radio stays on the Chill Channel featuring lots of, well, “chill” EDM songs. The XX’s Reunion was on mad rotation and it cast its spell. All indie bands play covers, right? Again, I don’t want to just show up. I want to be both familiar and unheard of at the same time, so I decided to do the cover and I wanted to put the piano’s innards on display to capture the string sounds of the XX’s guitars, the cool beats and the overall mystical vibe they give off.

A + C: Are you part of a new classical wave at SX or is it the Jade Wave?

JS: As often as possible, I do my best to make sure it’s the Jade Wave! “Irreplicability”, I made that word up, should be every artist’s goal.

If you go on the SXSW site, search showcases and enter classical you’ll find 3 other artists. I don’t think they are even playing classical as we know it, but are classically trained and play more cross-over material. Ironically, I’m listed under Avant/Experimental but will actually be playing some traditional classical in my set.

Nevertheless, overall there’s a new genre popping up called Indie Classical. I guess I fit there in some ways. That genre exists because more classical artists are comfortable expressing their multi-genreness and also for the practical reason of there not being room enough on the traditionally classical stages for all of the aspiring artists coming out of conservatory. 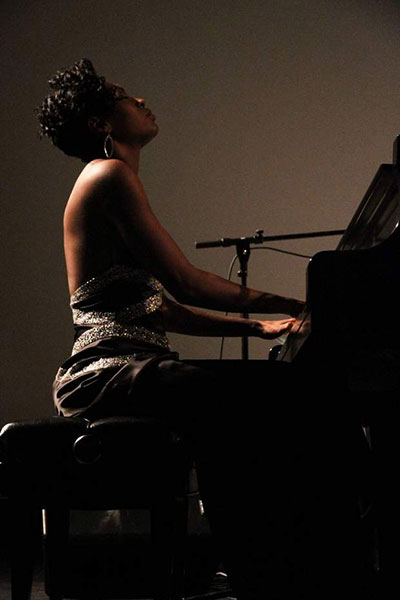 A + C: What do you hope to accomplish there?

JS: I made it a point to include what I’m calling “straight ahead classical music” in my set, meaning full, unadulterated classical pieces. The music speaks for itself and doesn’t need to be crossed over or helped along with electronics. I want to show it can hold it’s own in any setting. On the flip side, it’s important to me to show that pitting this music alongside (not against) more modern, even urban or dance-based sounds doesn’t do it a disservice. At SXSW, as always, my aim is to first prove to artists that our creativity is more boundless than we imagined and to engage audiences as thoroughly, memorably and unexpectedly as possible. If I pick up some new fans along the way and create some new exposure for myself with an unsuspecting audience, too, hey, I’ll take that

VIDEO: JADE SIMMONS AT THE YAMAHA SALON IN NYC.