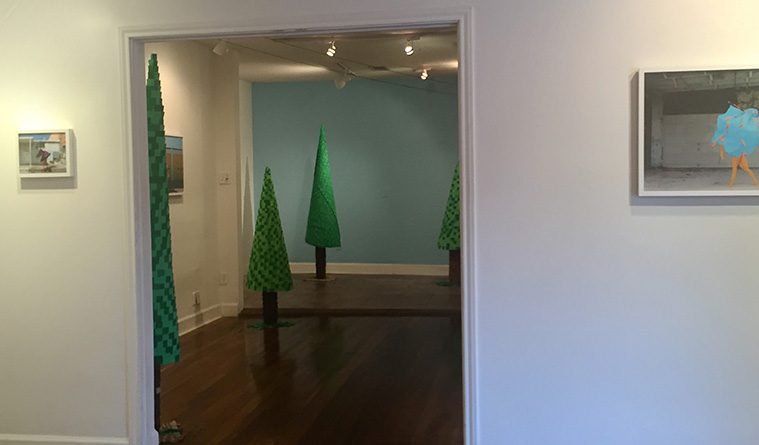 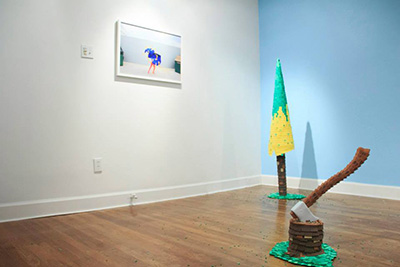 Commutes are something we are all familiar with. We spend anywhere from a few minutes to an hour or more sitting in our cars just to get to work. The world around us melts away as we focus on getting from point A to point B, slowly becoming complacent and unaware of the space we occupy. What if you took the time, though, to slow down, pull over, and visit the places you pass so many times a week? It’s this simple idea that drives Hector Hernandez’s work in The Longest Distance, on view at BLUEorange Gallery through July 2.

Within the space, Hernandez has reconstructed scenes from his daily commute, creating foam sculptures of trees, birds, and telephone poles, that leave viewers feeling as though they’re stepping into Minecraft or walking onto a lego play set. The pieces create a very playful environment for the viewer and set the stage for the photographs which make up the conceptual bulk of The Longest Distance. 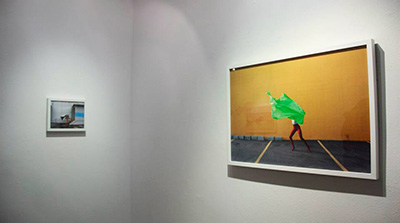 The exhibition displays a body of work built around Hernandez shifting the focus of his commute. Instead of allowing the world around him to melt into a blur, he focused in on the objects, foliage, and landmarks that dot his trail and from there wove what he uncovered into an exhibition that activates these spaces, so often unconsidered by passing commuters, in multifarious ways. For the viewer, the activation might seem to be in the final product. Hernandez showcases the spaces in unaltered digital photographs featuring model Jordanlehn, who can be seen swirling fabric around her body.

Truly, though, the initial activation of these spaces is not this final documentation but the performative photoshoots between Hernandez and his model that created a series of colorful characters who occupy these places. By bringing Jordanlehn in and having her swing these giant swathes of fabric around her body, the artist activated these spaces long before the work was put on display. Hernandez not only gave attention to these landmarks through performative photoshoots, but, he undoubtedly drew the attention of those passing by while he and the model created a series of colorful characters who occupy these places. This cast of characters adds a strong aesthetic element to the photographs as the model hits poses that may leave the viewer questioning how exactly she got into some of the positions Hernandez captured. 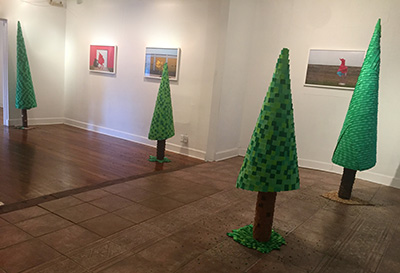 Through these characters, he begins to construct a mythos for the unknown yet familiar community that houses these ignored spaces. The viewer gets a glimpse into what secret wonders these spaces potentially hold, but as of this exhibition, only the surface has been scratched. There are valid arguments for whether the lack of depth or development in these figures draws away from the merit of the work. On one hand, it can be said that only representing this introductory level is enough: It piques the interest of the viewer and may drive them to find out more about the places they neglect. The swirling fabric reflects back on the idea of these spaces and the people who occupy them, melting away as the commuter speeds by.

But the other hand is empty. It isn’t satisfied with the unexplained appearance of characters and yearns for dedication to these characters and development of who they are and what we’re missing by not visiting the spaces that house them.

The aesthetic value of Hernandez and Jordanlehn’s characters is unquestionable. Without them, the work would be nothing more than meek portraits of empty lots, and the meaning and feeling of the exhibition would be wholly altered. But is that enough to justify their label as characters? Something to think about on your next commute.