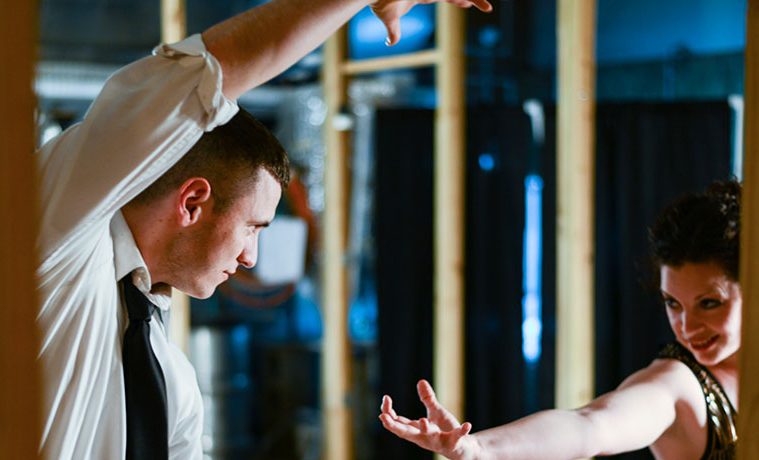 The Play’s the Thing

IMAGE ABOVE: Jovan Martinez and Amy Guerin in Elizabeth Keel’s Going Dark at This is Water Theatre Company. Photo by Jess M. Photography. 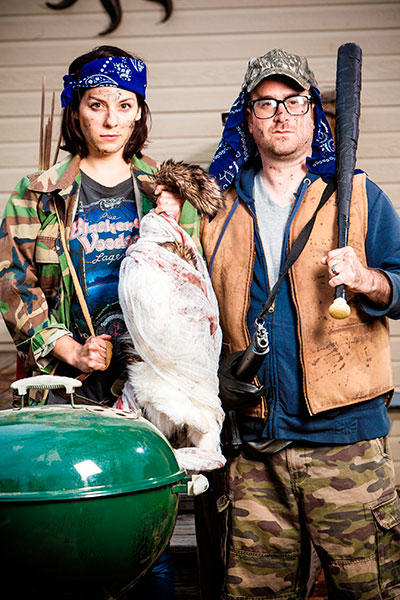 Being a playwright is no easy undertaking. Even if you’ve mastered the discipline it takes to just sit down and write a play—nothing to sneeze at—your real work has only just begun.  Once you have completed a piece, you must go about the very laborious process of trying to get the damned thing produced. Theater companies by and large stick to the “produce what’s been done before” model, which is why we’ve all seen our share of “classic plays.”

I have been writing plays on and off for most of my adult career with nominal success. A few shorts in festivals, some readings here and there, but it wasn’t until my first full-length play, Your Family Sucks, received its world premiere in Houston in 2012 at Horse Head Theatre Company, that I was able to fully understand the harrowing life of the playwright.

There are several methods for getting a play produced, explains Elizabeth Keel, a Houston-based playwright. You can send your play off to the host of theater companies around the country that put out calls for new work, you can try and get an agent, or you can throw caution to the wind and put the play on yourself. Keel is a fan of the latter.

This fall, Keel was awarded an artist residency at the Houston art space, 14 Pews. There, she was given carte blanche to write and produce her own work. Along with that freedom, however, was the fact that anything she wanted done, she had to do herself. This didn’t faze her, as she is one of those playwrights who enjoys rolling up her sleeves and getting her writing off the ground.

“It is more important to me,” says Keel, “to have a homespun production than to have my writing live in a drawer.”

During her stay at 14 Pews, Keel used her own funds to do much of the producing; she lived without a couch for a while because it was being used as a set piece.

That is not to say that she hasn’t had other theater companies produce her work. Because of her production with 14 Pews, a fledgling theater company out of Bryan, Texas, This is Water, came across her work and inquired if she had anything that they could produce. In March, the company opened their doors with Keel’s play Going Dark. Most recently, she had a short piece, Roadside, in the University of Houston’s inaugural 10-Minute Play Festival.

Theater companies love to put on 10-minute shorts and one-act plays. They throw a swarm of them together and call it a series or a workshop. The more plays you have in one show, the more actors, writers and directors you have, and this all means more bodies in seats. Most of these series have little to no scenery, which also makes them cost effective. Several companies begin hosting these evenings of short works to find they turn into full-fledge festivals, which is exactly what happened to TeCo Theatrical Productions in Dallas.

In February of this year, TeCo produced its 12th Annual New Play Competition. The competition started out as more of your standard short works collection, but in 2002, TeCo decided to kick it up a notch by making it a full-fledged competition. “We thought that by turning it into a contest, it would be more exciting,” says Executive Artistic Director, Teresa Coleman Wash. 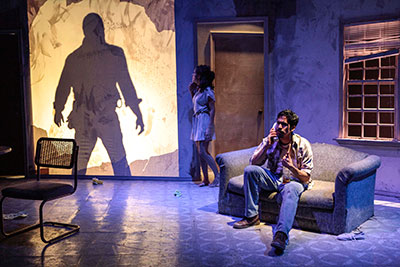 Of the stipulations for entering, playwrights must submit a piece of no more than 20 minutes running time, no scene or set changes and the playwright must be local to the Dallas area. Of the 30 submissions they received this year, six were given full productions. To up the ante even more, the winner is chosen by the audience. Wash, who is a playwright herself and understands the struggle of getting work produced, loves the idea that TeCo is cultivating local writers, and there have been times when the winning playwright went on to do more work with the theater company. This year’s winner, Antay Bilgutay, took home the grand prize of $1,000 for his one-act play Strangers in a Chapel.

These types of short-work festivals have gained popularity all over the country, but they take their cues from the original fringe fests of yore, which are now the crème de la crème of theater festivals.  The WaterTower Theatre in North Texas has produced its Out of the Loop Fringe Festival for 13 years now, and each year it grows. What started as a way to produce more avant-garde material that WaterTower can’t include in its regular season has turned into a massive fringe festival taking place over the course of ten days each March. This year, 18 artists and performing arts groups participated in the festival, which is housed in various locations throughout the Addison Theatre Centre. WaterTower also produces a play during the festival; this year it was the racially charged Honky by Greg Kalleres.

Despite being one of the larger theaters in town, WaterTower is drawn to new work. This may be due to the fact that its producing artistic director, Terry Martin, is a playwright as well. We are seeing a pattern here! “WaterTower is committed to the local artists trying to make a living here in Dallas,” Martin says. “And through the festival, the theater is able to showcase new works that might not have the support elsewhere.”

Often, festivals and competitions include readings of plays for potential production. One theater that dedicates itself to new play development is the Houston-based Wordsmyth Theater. Describing it as a “playwright’s theater,” artistic director Elizabeth Earle saw the need for a company committed to reading new works. The company receives roughly 300 submissions annually, which translates into six readings per year— with one dedicated to a local writer and one a non-English piece. The company has seen several of their readings go on to full productions, most recently, Philip Dawkins’ Failure: A Love Story, went from Wordsmyth to a successful run at Houston’s Stages Repertory Theatre this past winter.

While keeping fingers crossed that a company chooses your play for a reading is an option, you can also look for a company to work with on a regular basis. In 2012, The Catastrophic Theatre, in Houston, added to its inventory the works of playwright Miki Johnson. She is now the company’s resident playwright. Johnson has had three of her plays produced by the company, with her fourth, The Economist, slated for November of this year. 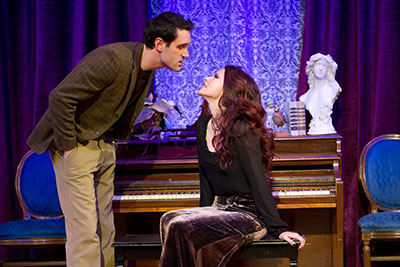 Hooking up with a theater company is one way, or you can be proactive and start up your own! That is exactly what Houston writer and professor at the Honors College at the University of Houston, John Harvey, did in 2001 with his play Kama Sutra. Along with actress Jennifer Decker, the two created Mildred’s Umbrella Theatre Company in 2004. A decade later, Harvey and Decker are a producing team with nine of Harvey’s plays completed, and it’s their collaborative spirit that they credit to their success.

“If my work was done in a more traditional theater company way,” Harvey explains, “I don’t think it would work.” Harvey understands that this approach isn’t for everyone, and the likelihood of him getting one of his plays produced elsewhere is low. He admits that this isn’t one of his overall goals.

For a playwright, there is something comforting in being a part of the production process; this I know well. Your play is your baby and every word of it is gold—in your own mind, anyway. Once you have given birth to that first production, it might seem like the sky’s the limit. But as it turns out, the second production is even more difficult to obtain than the first.

I found this out firsthand when I began sending Your Family Sucks to contests and theaters that had called for submissions. What I found was that because it had already been produced, I was barred from submitting it. Most writing contests specifically state that your submission cannot have been produced elsewhere. It seems that no one wants to do your second-hand play.

“Everyone wants that world premiere,” explains Tina Parker, Co-Artistic Director of Dallas’ Kitchen Dog Theater. Parker goes on to say that the cachet of producing a first-run sells, in terms of PR and press. And with the high risk of investing in a playwright that isn’t established, the theater needs all the help they can get.

To assist playwrights with that second-production challenge, Kitchen Dog became a member of the National New Play Network (NNPN). The NNPN is a countrywide organization dedicated to producing new works in a collaborative manner. One way they do this is through their Rolling World Premieres. Kitchen Dog and other members of the NNPN agree to premiere the same new play throughout the course of a year in an attempt to bolster its recognition. This, too, helps with that pesky second run issue that so many playwrights contend with.

Kitchen Dog showcases this rolling premiere during its New Works Festival, now in its 16th year. This year’s showcase, which runs from through June 21, will see the production of last year’s festival winner, Barbeque Apocalypse, by Texas playwright Matt Lyle. Additionally, six staged readings of plays, chosen from over 400 submitted, will be produced during the festival.

Lastly, doing a play, new or otherwise, is a huge expense. A big part of getting new work off the ground comes down to funding. Enter the Donna Wilhelm Family New Works Fund, a series of new grants being administered by The Art Community Alliance of Dallas. The fund, now in its second year, awards three grants totaling $100,000 for the sole development and production of new works. One of this year’s recipients, Second Thought Theatre, is using the funds to produce Booth, co-founder-and-artistic director Steven Walters’ new play about the assassination of Abraham Lincoln. The play runs from through June 14 at Bryant Hall at the Kalita Humphries Theater.

As tough as it is to be a playwright, there appears to be increased support for new talent. But it’s not just the theaters that make this happen, audiences can do their part by attending one new play this year. And then when that playwright makes it to the big time, you can say you saw them back when.