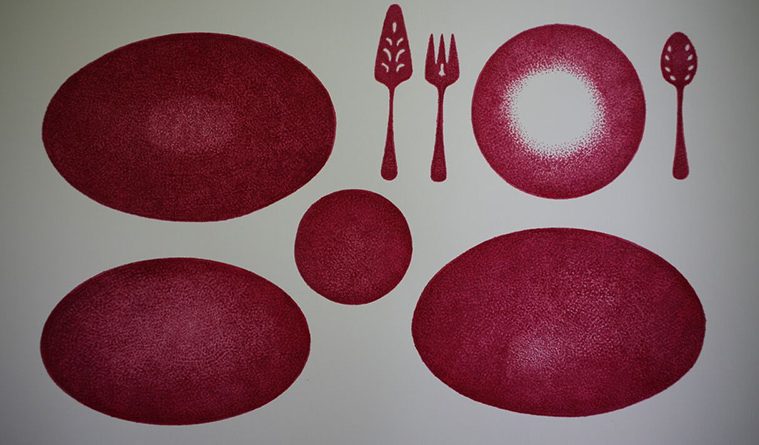 The Shape of Home 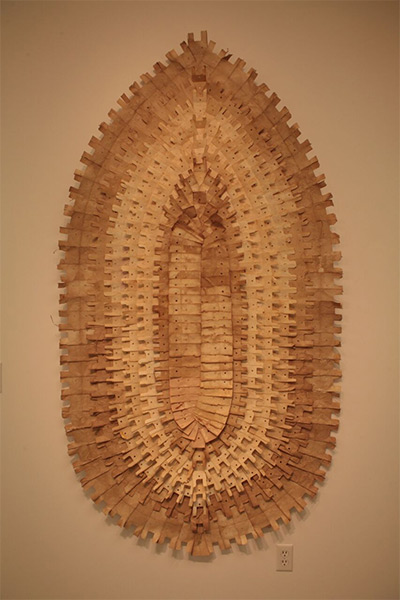 Mari Omori serves Japanese tea at her home in Spring, Texas. The tea is warm in lovely, wobbly mugs the perfect size for two hands.  It’s made from leaves her “sister sent from Japan. So fresh I could take a bite out of them. They don’t last long.”  This small daily pleasure connects her to family and her homeland.  In an act of Proustian time travel, a sip of tea can connect across time, distance, and generations.  It’s a practice she adopted from her grandparents.  “Nothing was taught; the tea comes first.”

In addition to physical and psychic nourishment, the ritual and medium of tea has provided Omori’s artistic raison d’etre since 1997.  In preparation for her latest show at the Galveston Arts Center (her fourth as artist or curator in a span of 21 years), Omori diligently collects the remnants of her favorite ritual. She weaves the tea bags and their tiny individual wrappers into massive round or lozenge-shaped wall pieces.  “I don’t do anything specific to preserve them; the tea acts as a preservative.”  The works are half-painting, half-sculpture, although Omori doesn’t see the point of such distinctions.  “Artists don’t decide these things.”  Her real interest is in the process and her self-described “search for the shape of home.”

This search, and Omori’s ideas about home, begin with tea but don’t always end there.  The simplicity of her objects belies what is an intricate and multi-layered concept of “home”—an idea built on daily life and ritual as well as the exploration of cultural and physical boundaries.  She couches her personally-fraught relationship with immigration and the physical search for a new home within the context of the equally fraught historical relationship between Japan and America. For example, Omori cast a series of soap sculptures in the proportions of the barracks of a Japanese internment camp she visited in Crystal City, Texas.  “Each piece cures for four weeks.”  She invites me to touch the cured soap piece (“it’s made of goat’s milk,”) which is still cool to the touch and slightly moist, as though harboring a living memory. 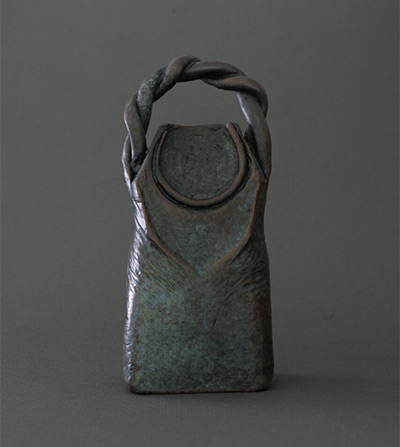 In another recent series, the artist has cast eight bronze bells (silent minus their clappers) in commemoration of the Tohoku earthquake and tsunami that triggered the Fukushima nuclear meltdown in 2011.  “The island moved eight feet toward the US” in the wake of the disaster, she says.  The idea of a human and environmental tragedy bringing us literally closer together is a powerful one for the artist.  Omori chose a “green patina for the bells,” to “make it look ancient.”  She acknowledges the timelessness of these issues.  Having lived for nearly 40 years in the United States, Omori’s work beautifully expresses a yearning for the culture of her childhood, blended with the adaptability of an American.  “I grew roots,” she shrugs.

The poetic use of materials and deceptively simple iconography has not always been a part of the artist’s repertoire.  “I began [at UCLA] as a photorealist painter… but you become a technician.” Besides, she adds tapping her head, “I wasn’t getting the color in here.”  Interestingly, saturated color has made an appearance in her latest work.  Her latest exhibit at the Galveston Art Center features a series of paintings on paper using cochineal ink that Omori made while at a residency in Oaxaca, Mexico.  “Every residency, I just bring myself.  I wanted to extract and create something from that environment.”  The vibrant magenta of the cochineal is extracted from tiny ground insects that have fed on the prickly pear cactus.  The circular forms in the paintings echo the shapes of plates and tables, and are meant to “celebrate the moments of food culture,” familiar and beloved rituals in any country.

A single tea bag, discarded, is an unimportant and less than fascinating object.  In the hands of Mari Omori, the repetition and accumulation of this little object over months and years begins to describe the intimate daily functions of an individual’s life.  It speaks to her physical impact on the larger world, both negative and positive.  It’s easy to feel insignificant, awash as we are in the ocean of our own personal and cultural histories, but Omori’s work seeks a way for artist and viewer to connect across these gulfs, to see our individual longing for “home” as an integral part of a longer and richer story.