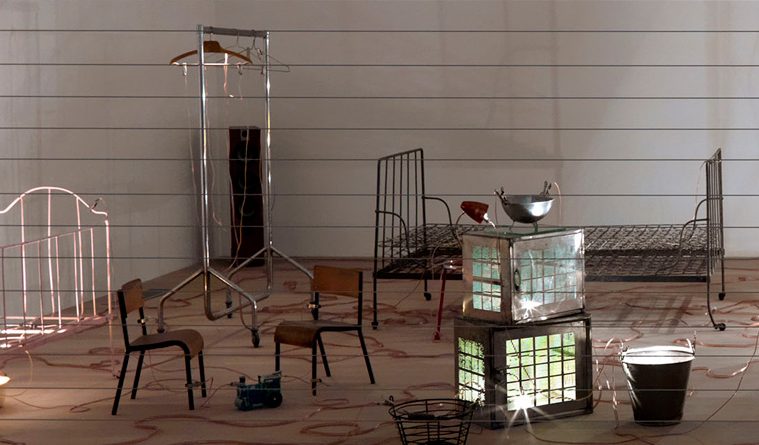 The Space in Between: Mona Hatoum at the Menil Collection 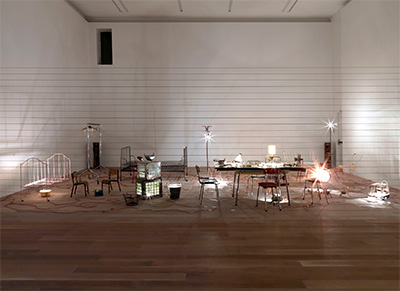 Terra firma is Latin for “solid land” but Mona Hatoum is not interested in stability. Her show, Terra Infirma at the Menil Collection through Feb 25, is her first in the U.S. for over 20 years, and it is timely. Around the world people are displaced, driven from their homelands. Here in America, environmental disasters are striking on a regular basis. Home is no longer a safe place.

Born in Beirut to Palestinian parents, Hatoum moved to London in 1975 and stayed there after her country descended into war. It would be easy to understand her work literally, as a journey of displacement, but that would be a serious shortcoming. Hatoum deals with much broader themes, a practice comprised of performance, film, sculpture, and installation that she has developed over the last 40 years.

Central to Hatoum’s art is the concept of the uncanny, derived from a seminal essay that psychoanalyst Sigmund Freud wrote in 1919, in which he defined “the uncanny” (das Unheimliche) as something that is at once familiar and frightening. In Hatoum’s work, this takes the form of juxtapositions between materials, but also between the artwork and the viewer. For example, for her installation Nature Morte aux Grenades, she carefully lays out colorful glass objects, placed on a steel trolley like shiny jewelry. Upon closer look, the objects all have the form of hand grenades. In French, grenade is both a pomegranate and a hand grenade: still life, dead lives. Our body is drawn to the beauty of the material, but our head is toying with associations of war and destruction.

Hatoum aims for this—the push and pull, seduction and resistance. Opposite Nature Morte aux Grenade is Impenetrable, an almost ethereal installation of steel poles levitating above the floor. It draws viewers in and then confronts them with barbed wire, the material of prisons and concentration camps. In the corner is Silence, the familiar object of a child’s cot made of laboratory glass tubes and lit from above like a reliquary. A baby’s cot is supposed to be all but silent; the extreme fragility of the object is menacing, unfamiliar and unsettling.

In the next room, Hatoum’s steel sculptures destabilize viewers in a different way, playing with perception of scale. A giant upright cheese grater functions as a room divider, and another one is laid flat like a bed that never offers rest. A food grinder found in her mother’s kitchen drawer is blown up to seventeen times its original size, welcoming us into the gallery space like a giant scorpion. They form a dialogue with the Menil’s monumental sculptures outside, but Hatoum turns art history on its head, replacing the masculine, geometric forms with the random irregularities of domestic life.

Hatoum herself is most excited about the Menil’s Surrealist collection, artists like Rene Magritte, Marcel Duchamp, and Meret Oppenheim, the masters of the uncomfortable, of ambiguity and dreams. The Menil has allowed her to make subtle interventions inside the galleries. Opposite Magritte’s famous painting The Rape—a woman’s face shaped by pubic hair and breasts—stands Hatoum’s Jardin Public, an elegant wrought iron chair holding a perfect triangle of real pubic hair. Hair returns often in Hatoum’s work, subtly inserting the body where the human figure is absent.

Some of Hatoum installations in the Menil galleries are visually complex; for example, Homebound consists of an interior where all the objects are linked through electric currents. The room sparkles and reverberates with the electrical buzz of domestic confinement. Quarters consists of four stacks of bunk beds, laid out in the Panopticon-shaped architecture of the Pennsylvania prison from which it was inspired.

In Interior/ Exterior Landscape, the atmosphere palpably changes. There is fluorescent lighting and the room is minimally furbished. A steel bed frame sits in one corner, with the blankets missing; only a pillow embossed with hair hints at a human presence. In the opposite corner, a wooden chair melts into a wooden desk, another reference to Magritte. A coat rack is empty, except for two symbolic clothes hangers shaped like heads. The stark contrast of the harshly lit, bare space with the lush and colorful rooms that surround it brings to mind what it must feel like to arrive in a strange place and find the mirage of a home when your real home, your life and soul, has been left behind.