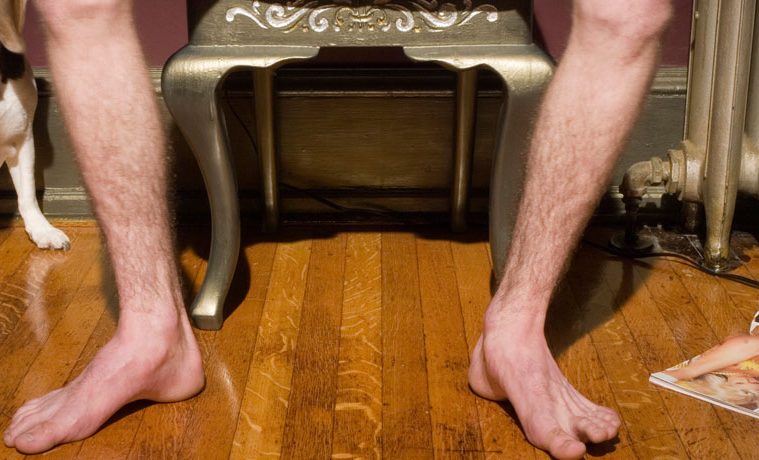 The last time anyone thought about masculine stereotypes in the art world was when, inspired by the obtuse adjacencies of Time-Life magazine cut-outs on the floor, Richard Prince re-photographed pictures of male models in the late 1970s.

In the new millennium, there’s work like Gabriel Martinez’s Self-Portraits by Heterosexual Men (2007), a series of chromogenic prints of men’s feet. The toes are pigeoned and curled inward on some. Others stand athwart, toes pointing out. In one shot, a beagle sits next to his master’s naked feet, across from which sits an open girly mag. The three elements create a telling triptych. Is the money shot on the floor in the magazine or between the anonymous man’s feet, where soon after the photo was taken the floor became home to the nectar of his god?

Curated by Erin Stafford, The Sweetest Taboo is racy and smart, a coalescence of four strains of art communicating, yes, the ambiguities of sexuality, but also its labors. Libby Rowe’s Learning Feminine: Posture is an interactive piece calling upon viewers – men or women – to don pink high heels and walk the line of femininity with a teacup on the head. Large, brash figural paintings with luscious surfaces by Angela Fraleigh and compositionally tight and funny photographs and videos of a woman in Victorian wig and garb wrestling a burly man round out a fantastic show.