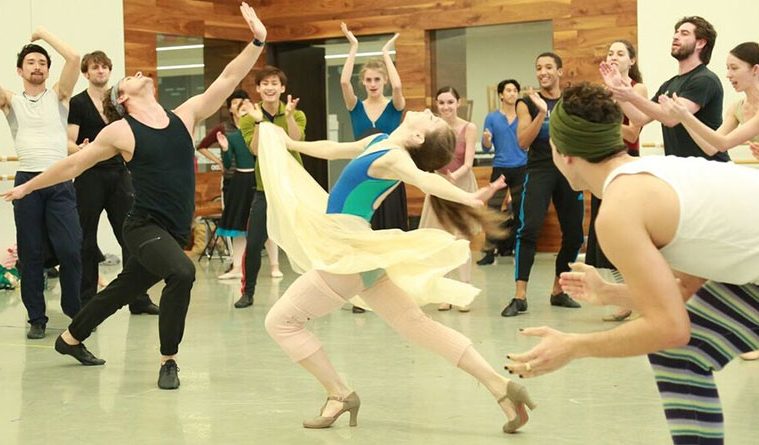 They Can Sing Too: Expect Triple Threats at Houston Ballet with West Side Story Suite 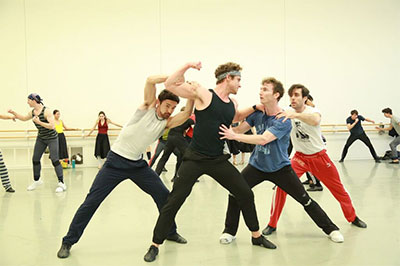 I always expect to be dazzled when I walk into a Houston Ballet rehearsal, but watching this talented company sing as well as dance raised the thrill factor. On March 10-20, Houston Ballet presents the company premiere of Jerome Robbins’ West Side Story Suite, a rare ballet that includes singing roles for some of the dancers. Rounding out the Winter Mixed Rep is Wayne McGregor’s Dyad 1929 and Jiří Kylián’s Wings of Wax.

Leonard Bernstein changed the landscape of Broadway forever in 1957 when he dropped Shakespeare’s classic love story Romeo and Juliet into the middle of New York City’s gang warfare for West Side Story. With lyrics by a young Stephen Sondheim and choreography by Robbins, West Side Story went on to become an iconic musical, a 1961 film, and in 1989, Robbins (with Peter Gennaro) reconfigured the musical into a ballet suite as part of Jerome Robbins’ Broadway. In 1995, he re-staged it for the New York City Ballet. The Suite consists of a collection of some of the most cherished selections from the musical, including “Prologue,” “Something’s Coming,” “Dance at the Gym,” “Cool,” “America,” “Rumble,” and “Somewhere Ballet.”

The singing roles are interesting, and not what you might expect in that the two lovers, Tony and Maria, do not sing. The singing roles include Anita, played by Melody Mennite, Anita’s friend Rosalia, sung by Karina Gonzalez with Jacquelyn Long as a cover, and Riff, song by Rhodes Elliott and Ian Casady. And, of course the ensemble does some sassy singing as well. In the pit you will find Houston singers Jack Beetle, Alicia Gianni, Danica Johnston, Kristin Warren and Chelsea McCurdy. 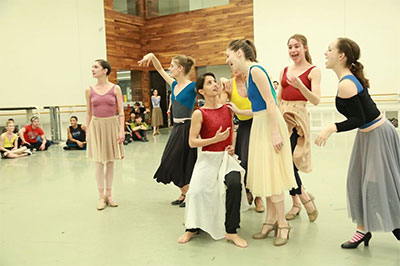 The dancers were coached by Joan Barber, who has performed one of the off stage roles before. Her enthusiasm for the dancers is palpable. “I am working with excellent singers here,” says Barber. Despite their natural vocal talents, there’s still much work to do. She continues, “The breathing is challenging, especially when they have to stop dancing and sing.”

“Did you see doing West Side Story Suite as a risk?” I asked Houston Ballet’s artistic director Stanton Welch. “Not at all,” Welch replies with confidence. Welch was certain that he had enough talent within the ranks to pull it off. “We are such a musical company. I knew going in to it that Melody could sing. Rhodes’ brother is an opera singer, so singing is in his blood. The real surprises were Jacquelyn and Karina.” Welch mentions that many of his dancer have musical theater in their early backgrounds, so it’s not such a stretch. “We are a broad company,” he adds.

Musical theater and ballet are moving closer together, especially when you consider An American in Paris is making its mark on Broadway right now, with ballet dancers in the lead roles. Robbins seamlessly floated between these worlds, so it makes perfect sense that West Side Story Suite exists as a kind of hybrid dance/ musical theater piece.

The ballet was staged by J.P. Frohlich from the Robbins’ Foundation, who makes sure the ballet has the authentic Robbins stamp. It’s evident that the company relishes the chance to expand their skills. “We are a very theatrical company,” says Welch. “One of the things JP loves about Houston Ballet is that our dancers move like real people.” And it’s exactly that “real people” factor that makes the rumble look authentic.

“We do Robbins well,” boasts Welch. And they do. The company has an impressive Robbins repertoire, including The Concert, Afternoon of a Faun, In the Night and Fancy Free. 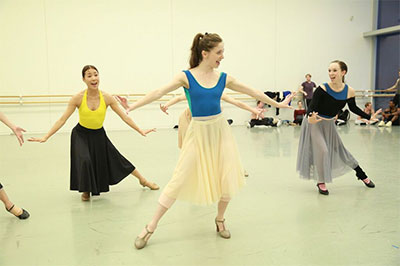 Mennite, who harks from a musical family, is completely in her element. In watching her play the role of Anita, I can see all the fire that we are all used to in her many dramatic roles. “It’s been such a wonderful experience to have rehearsal time devoted to vocal coaching and development,” says Mennite. “It felt so strange at first to fill the studios with the sound of our singing voices. Hearing each other sing was also so special and surprising. It’s nerve wracking to do something totally different in front of each other, and now we will have to do it on the Wortham stage! Even though I find myself shaking every time we are about to do “America,” it has become something I look forward to every time we have rehearsals.”

West Side Story Suite works so well on so many levels. The fact that most of us are so familiar with the source material helps. But seeing this company reach to new levels of theatricality is definitely worth seeing and hearing! Expect equal doses of chills and thrills during the finale when the entire ensemble sings Bernstein’s haunting but hopeful anthem, “Somewhere.”