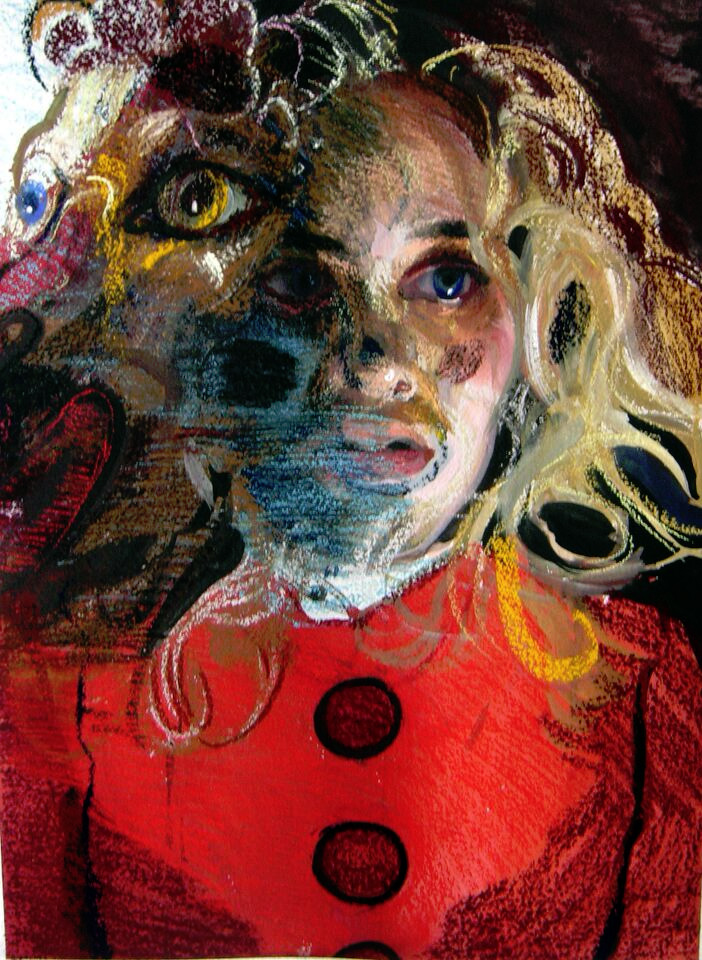 They Were Violent Times

Natalie Frank is a bright, energetic, and exceptionally amicable artist. Her work is the antithesis—dark, mucky, and unnerving and the project she began about four years ago, illustrating and interpreting the tales of the Brothers Grimm, is a curiously complex undertaking. The project has manifested itself in two forms: first, in the publishing of an art book, and second, in an exhibition at the Drawing Center of New York that comes to the Blanton Museum of Art July 11-Nov. 15.

The Tales of the Brothers Grimm are a complex and widely- misunderstood collection of stories. The brothers, who are commonly believed to be the authors of their stories, actually collected the tales from women (mostly), living in the rural parts of Germany. What’s more, the stories most popular today—Cinderella, Little Red Riding Hood, Rapunzel—are not what they seem; the sugar-coated “Disneyfied” versions known to adults and children alike. In the original form the stories are less easy to consume, still oddly moralistic but often gruesome, frequently ending abruptly with strange non sequiturs. Frank points out that the translator Bruno Bettelheim “thought the stories were actually good for children, because they introduced them to the way the world actually works. Though these were never actually intended for children, I think they were meant to paint a picture of society at the time.”

For example, Cinderella, in the story’s original telling, has neither Fairy Godmother nor glass slipper and the stepsisters nearly get away with marrying the prince by cutting off parts of their feet to fit into the golden slipper. It is only when the prince sees the blood soaking through their stockings that he rejects the false brides. With recent publications of translations of the original unabridged Tales of The Brothers Grimm, knowledge of the violent, obscene, and crude nature of the stories may become more common, but it is the lesser-known tales which are of particular interest to Frank, as she reveals through her paintings. She isn’t afraid of what they mean—she thinks them sharp, conveying a kind of proto-feminist trope that smartly rebels against the circumstances women were stuck within at the time of their writing.

“The violence was part of the time in which they were written,” she says, “These things happened; women died in childbirth, and stepmothers came in and children slept with fathers. But it’s strange because people sometimes talk about how gruesome the stories are; I found them to be so funny and poetic and lyrical because they really represent their time. They especially represent the women.”

“It’s not psychologically terrifying; it seems more a parody of the kind of violence happening in a society with changing structures than some kind of horror movie,” she goes on to note. “The violence is best understood as a hyperbolized way of dealing with the issues that affected the people in Germany at that point in time. The poetry of the work is woven in between the lines. Eventually, the stories were translated and sanitized to appeal to children, and it wasn’t until 1989 that the oldest, un-sanitized versions—closer to the original oral traditions—were translated into English.”

“We write stories today that are about our own time and ways to reflect who we are so that we can understand what we’re seeing around us,” Frank says, “And I think it was the same then, especially during a time when this kind of story tradition was more important, perhaps, than it is now.”

The book portion of Frank’s Brothers Grimm project was carefully put together with scholars, other artists and designers and features her personal selections of specific tales and their accompanying drawings. Frank’s drawings of these stories interpret them as they are, complete with viciously garish colors, carnival-like portraiture, and layers of ghostly scenes. Each of the tales she selected was given a splendid treatment, the text preciously surrounded by borders and paintings of scenes from the story, symbols of the moral implications and little decorations. It feels like one of those luxurious storybooks we treasure as children, with hard binding, the thickest paper and the prettiest illustrations, except here the beauty is subversive. Peppered throughout the pages are gilded flies, as if to smartly highlight how base everything really is.

Frank’s interest in the Brothers Grimm seems like a natural transition from her large-scale allegorical paintings—swirling with sexual violence, gendered power structures, and unnerving scenes of forced vulnerability. She found inspiration for the project from her friend and fellow artist Paula Rego, who nudged her in the direction of reading and thinking about the tales, something she initially undertook entirely for her personal pleasure. The result has been a deep fascination in the world of the Tales of The Brothers Grimm that has yielded an immensely enthralling collection of work and prompted plans to continue the project with illustrations of other, similar collections of fairy tales, myths and folklore in the near future.

The Blanton is curating the show to include wall texts and a special arrangement of 1-5 drawings per story. The exhibition will be an expansion of the show from the NY Drawing Center, showing even more work. In conjunction with the exhibition, public programs have been organized including an opportunity to hear Frank speak about the drawings on Saturday, July 11 at 3 PM with Blanton curator Veronica Roberts.