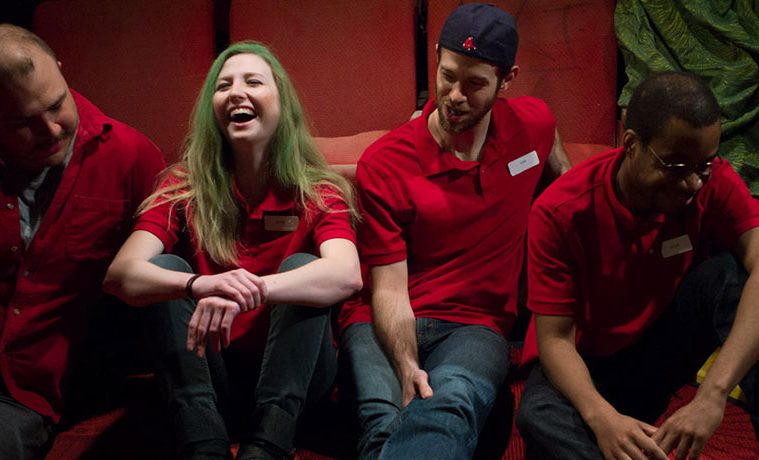 This Flick Takes Some Patience

In The Flick, Annie Baker’s Pulitzer Prize-winning play now having its regional premiere at Undermain Theatre through Jan. 31, three misguided employees work at an aging cinema in Massachusetts. Early on, one of the lead characters exalts that Pulp Fiction is the best American film in decades. It’s an ongoing debate with his other co-worker, who counters with such heavyweights as 2007 Oscar winner There Will Be Blood and any number of acclaimed films from brothers, Joel and Ethan Coen. The dialogue certainly establishes these two male rouges as uniting in their passion for film, and sets up an interesting dynamic.

But unlike Quentin Tarantino sharp dark comedy about the exploits of lowlifes, The Flick is saddled with underachievers who lack any vitality or insightful perspective on life.

Originally clocking in at close to three hours, The Flick divided audiences when it premier Off Broadway in 2013. Many critics hailed the script as funny, sly and insightful. Audiences either bought into the cerebral story, or complained about the lack of theatrics and extended running time. The Undermain production is as tasty as bagged popcorn — you munch on it freely even though you really are not satisfied.

Instead, what you get is a dry tale about the lives of three strangers that are passing the time—literally and figuratively—working underpaying jobs in a musty, deteriorating single-screen movie house. Yes, they are hiding from life, and yes, the script is clever in demonstrating that all our lives are played out in flickers of light. But our characters are not very engaging people, and with each reeling with inner drama, very little of their story is revealed in the script. Newest crewmember Avery (Jared Wilson) confesses uncomfortably that he recently attempted suicide. His pal Sam (Alex Organ) struggles to understand the plight of his retarded brother. And projectionist Rose (Mikaela Krantz) is the saddest of them all, in frumpy clothes that project her alienation, not only with her colleagues, but with the world.

ROSE: Do you think I’m a stereotype?

ROSE: Wait. Were you being fake? Just now?

And so it goes. And goes. And goes. There is a lot of reading between the lines, as dialogue is deliberately sparse, but pauses are aplenty. Some lines certainly draw a laugh, but in short, one could say it’s a unique theater experience, keeping the action limited to mopping floors and sweeping up popcorn. That would be fine, if the characters were more compelling—good or bad—and the dialogue had more snap. But borrowing from the movie theme of just showing us flickering scenes of life, Baker keeps the plot shrouded in filtered darkness. We never really know why Avery overdosed on pills or how Sam convinced himself to feel love towards Rose.

Still, some things are made quite clear. Robert Winn’s scene design of an aged theater auditorium makes sense, with its heavily draped walls, worn red seats and scratched floor. But the story location rings false. Wouldn’t employee interaction be mostly at the candy-counter in the lobby, where they’d sit idly by as patrons watched the movie? Giva Taylor costumes the three-member cast appropriately in banal attire, while the bold, brassy sound design by Paul Semrad counters the stillness of the plot.

The play opens with an extended blast of bombastic music, presumably the closing credits of an adventure movie just ending at the cinema before the lights come up and our cast automatically enters to clean-up before the next showing. Their dull unchartered lives a direct opposite to the flashy lives filmed by Hollywood. It’s a point Baker makes repeatedly; life is by rote and don’t expect to always have a happy ending.

But at some point it does end, at two hours and forty minutes at Undermain.