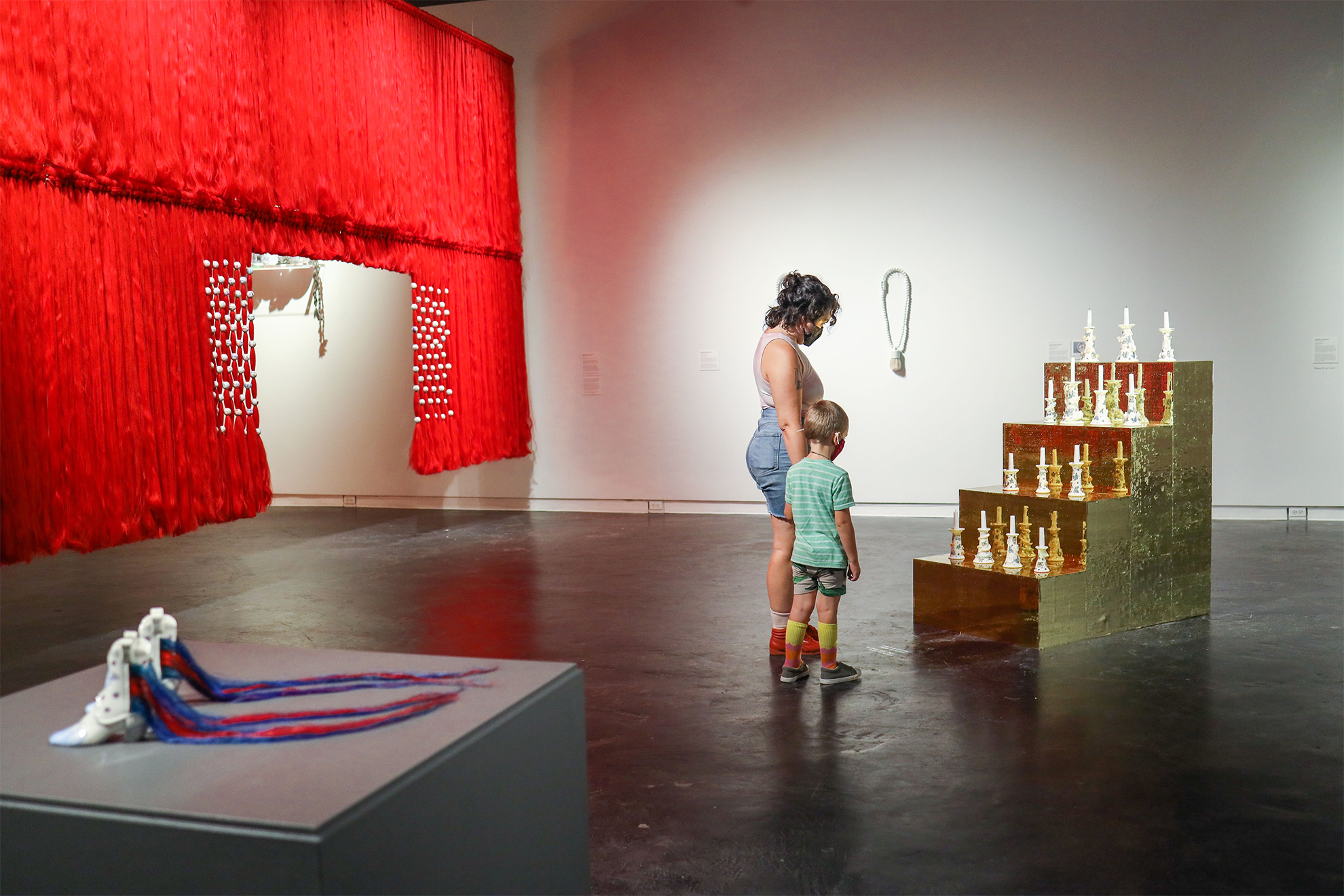 This Time ʼRound: Jennifer Ling Datchuk at Houston Center for Contemporary Craft

Creative expression is often responsive to, or even dictated by, circumstance. German playwright Berthold Brecht recognized as much with his 1939 poem “Motto.” In dark times, he wrote, there will be singing. But, the singing will be about the dark times.

San Antonio-based artist Jennifer Ling Datchuk reminded me of Brecht’s riddle-like assurance while discussing her current exhibition Later, Longer, Fewer: The Work of Jennifer Ling Datchuk, on view at the Houston Center for Contemporary Craft until Jan. 8, 2022. The works in the show include the artist’s signature blue and white porcelain sculptures, multimedia installations, and video, all of which “directly address viewers by critiquing the realities and contemporary perceptions of women’s access and liberation.”

Although plans for the show began in 2019, it’s not lost on this writer (and hopefully not on readers and exhibition visitors) that it has opened during a time when women in Texas—and by extension, women everywhere—are once again forced to fight for their rights to reproductive healthcare choices which are, this time around, being threatened by Senate Bill 8.

“We are told that we live in a country where we have so many freedoms and choices, but there are numerous cultural, political, and social systems that hold us back,” says the artist.

­­­
Datchuk’s ideas for the exhibition were generated by a propaganda poster she saw when she visited the Shanghai Propaganda Poster Art Centre: a central image of a woman, holding a bottle, surrounded by images of other women welding or reading or dancing. The text on the poster translated to “later, longer, fewer,” encouraging women to have children later in life as a way to support the country.

The red, white, and blue color scheme of the exhibition is simultaneously intentional and unintentional, which Datchuk likes. A first generation Chinese American (she grew up in Brooklyn), she explains, “Red is a very important color in Chinese culture. It’s good luck, prosperity, and wealth. Red is in abundance in our households. But it’s hard to talk about red and not acknowledge that red was the political color during the pandemic, a time when the most awful and racist things were said about Chinese and created a whole other level of fear. So red has very complicated associations with it now.”

Thick is a large red curtain of synthetic red hair strung with beads from China, a reference to the infamous red velvet curtain of the theatre stage, with a performer on one side and an unknown audience on the other. “How do we cross this threshold once it’s parted?” Datchuk asks.

The Center held community events during which participants wrote words of affirmation and respect on the beads. Datchuk read every bead as she threaded them into the curtain.

“I am thinking of these metaphorical transitions we make in the world of going from girlhood to womanhood, or being a woman and walking into all male spaces, or being a person of color and walking into all white spaces,” she says. “What can we do to help each other during this time? What are affirmations we tell ourselves to help us keep going when things are hard?” 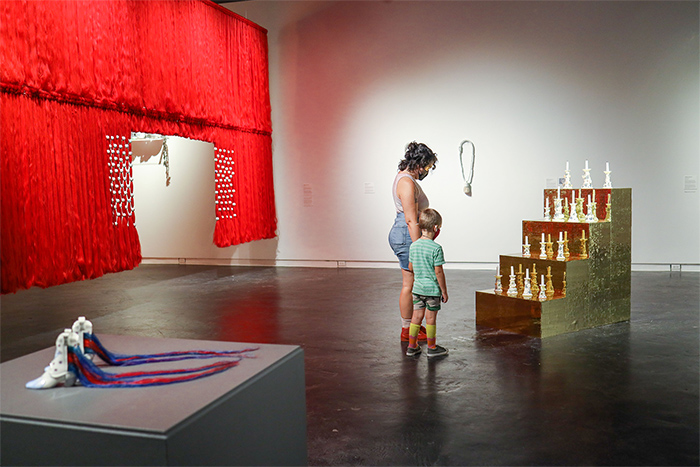 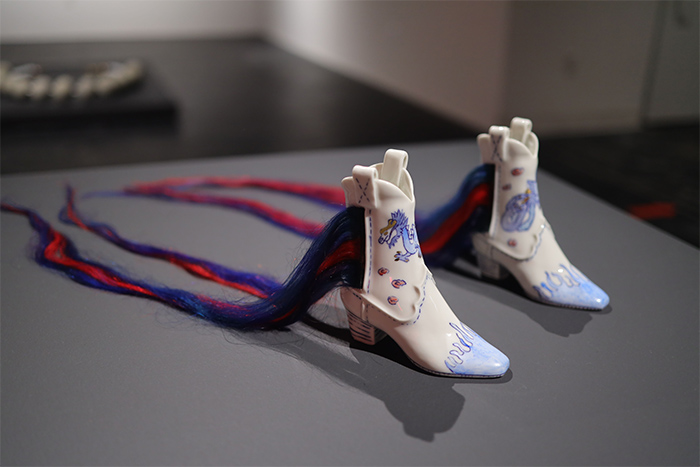 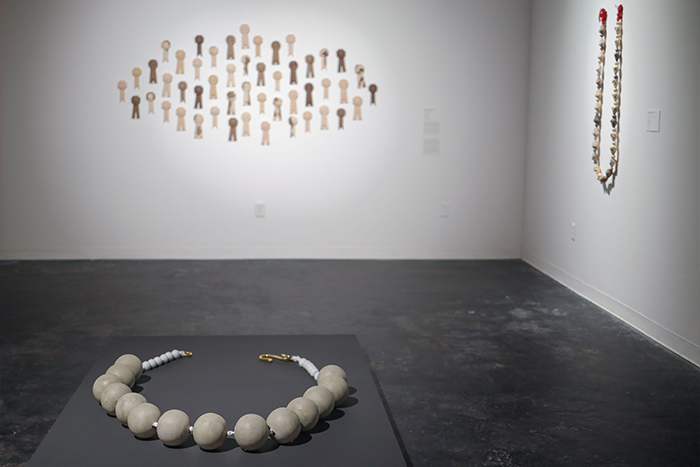 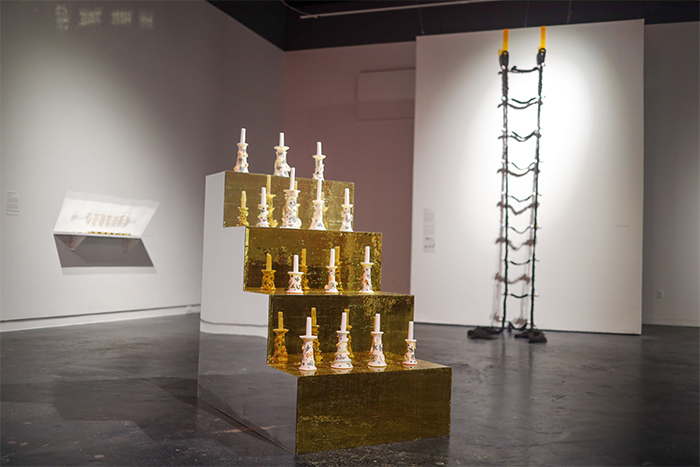 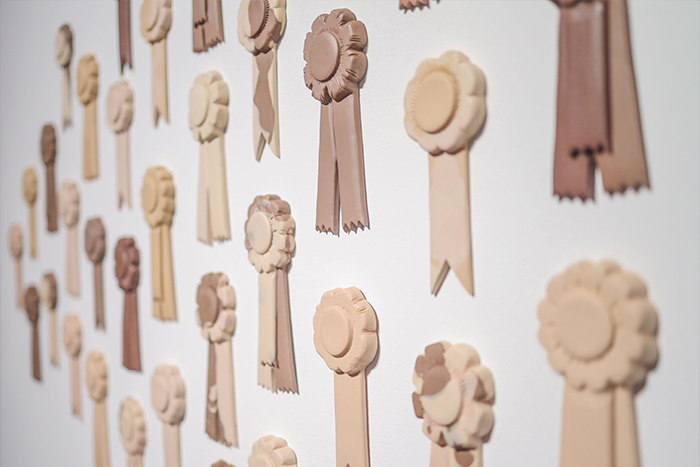 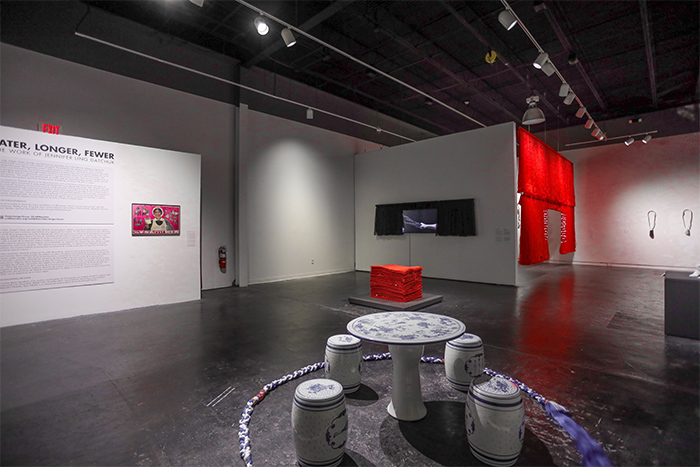 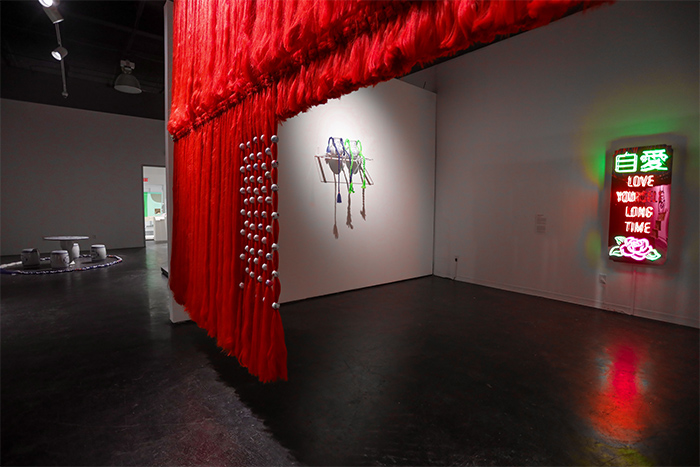 At right: “Love Yourself Long Time,” 2021. Mirrored acrylic and neon.

In addition to turning phrases and materials in on themselves, a foundation of Datchuk’s work is an investigation of blue and white pattern decoration often associated with Chinese porcelain ceramics. She points to how those patterns show global migrations, becoming appropriated in the west.

In Tiny But Mighty, a porcelain table and stools are adorned with blue and white paintings of the artist’s Chihuahuas which, she tells me, are among the most misunderstood dogs. The stools, though seemingly fragile, are made for sitting. And forming a protective ring around the table is a braided blue and white synthetic hair rope inspired by horsehair ropes made in Texas. Legend has it that snakes won’t crawl over the ropes.

Synthetic hair is central to other works as well, including a ladder titled We Climb; Giddy Up, miniature blue and white porcelain Victorianized cowgirl boots with streamers of red and blue hair; Break Like a Girl and Ache Like a Woman, blue and white porcelain garnitures, just out of reach and modernized with images of Powerpuff Girls and neon pigtails, seemingly holding hands or braids, as it were. Also playing with out-of-reach subject matter is Heavy, a large scale string of concrete “pearls” placed on the floor. Glass ceilings are hard for women to break when they are weighed down with expectations of how they “should” dress, act, look, and speak. 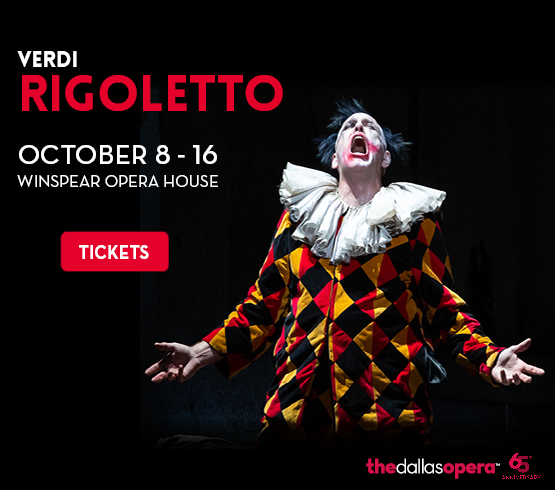 Taking expectations one step further is Two Week Wait, Datchuk’s formal response to a candlestick she found on eBay that was overly adorned in chinoiserie, a style of European appropriation of Chinese aesthetics, and marketed to a broad audience as a fertility candlestick. The artist’s maximalist version is composed of fourteen candlesticks, placed on a mirrored gold staircase and heavily adorned in chinoiserie patterns depicting symbols of hope like lucky horseshoes and wishbones.

The piece references the time between a woman’s period and ovulation, a welcome cycle or not, depending. But it is also a nod to the required two weeks of quarantine due to COVID-19.

“I really do think the personal is political. I use domestic objects that are familiar to the viewer, so that in some ways they can see themselves. I want the viewer to be confronted with themselves for a second. And to have them ask questions,” she says.

Embedded in that familiarity, Datchuk uses humor to prompt questions and conversations about difficult subject matter, sometimes hidden in plain sight in the scale, adornment, presentation, and language of her work. But, she notes, there is something that happens with uncomfortable humor that makes us assess why we’re laughing. What nerve, or complicity, is being poked?