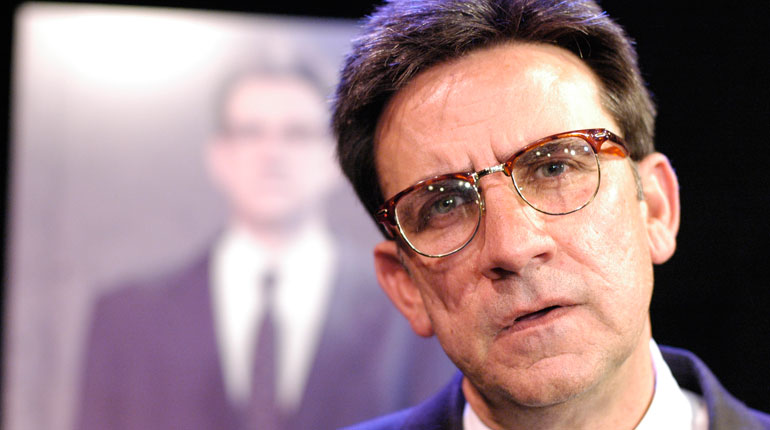 Thom Pain (based on nothing)

Ken Webster, artistic director of Hyde Park Theatre, stars in and directs Will Eno’s tour d’void, Thom Pain (based on nothing). This wildly successful play has graced stages from New York to Israel before its stint in Austin, TX. Thom Pain (based on nothing) is a one-man show featuring a meandering story teller, reminiscent of Rene Magritte’s Son of Man without the power tie.

Few things really happen on stage. Instead, Eno’s work slowly orbits around recollections of love, death, and suffering. Said planetary recollections are surrounded by existential asteroid belts punctuating fragments of exposition. Thom Pain eschews directional plot for the acknowledgment of the black hole at the end of the rainbow.

Mr. Pain tells a few stories. First, he recounts a boy witnessing a dog’s electrocution. Second, he recalls being stung by a swarm of bees such that he could not identify the source of pain. Lastly, he describes something akin to a romantic relationship fraught with miscommunication. These brief forays into the life of Mr. Pain color the otherwise gray scale protagonist. Perhaps Mr. Pain is more than a figure “who strike[s] people as someone who just left.”

Webster’s captivating voice balances out the lack of onstage motion. His time worn vocal chords lull the audience into imagining their own staging of his stories. As such, we imagine ourselves swarmed by bees mistaking sting for salve.

Previously, the work has been compared to existentialist stand-up comedy. However, Webster’s Thom Pain is better conceived as a short wave radio show broadcast out of an abandoned French bunker by a lonesome WW2 radio operator ignorant of the war’s end. His story telling is juxtaposed with campy, variety show like events such as a raffle. Of course, after asking everyone to check their tickets, he tells us that there is no raffle. These events are humorous and anxiety inducing.

At times, it was difficult to discern whether I was laughing because something was genuinely funny or to dispel a creeping sense of discomfort. Webster’s Pain elicited the former category of laughter. Take for instance, the oft quoted “It’s sad, isn’t it? The dead horse of a life we beat, all the wilder, all the harder the deader it gets. On the other hand, there are some nice shops in the area.” I laughed at the absurdity of abrupt topic change, a common humorous technique. The play is littered with similar humorous moments, which abruptly shift from the existential to the banal.

The other form of laughter, that which dispels creeping discomfort, could have been elicited if Webster would have let those disconcerting moments of existential analysis linger in the air for a moment longer before relieving the tension with the innocuous. Only during the audience participation sequence near the end did I feel that linger-for-too-long dread that gives emotional fuel to whatever follows. There was some laughter, sure, but laughter is not enough to power Eno’s engine, which runs on equal parts humor, heartbreak, and dread.

In order to nurture such emotional tension, a particular treatment of silence is required that Webster lacked. As that rabble-rouser, John Cage pointed out, absolute silence is impossible. As such, we should turn our attention to the elements that fill the void of motion or sound. Whenever we arrived at a moment of dramatically important silence, Webster’s chin would raise to a 135 degree angle from the rest of his body and stay there. This movement repeated throughout the hour and a half performance as a signifier of whatever is happening right now is dramatic and requires absolute stillness. Just as absolute silence is impossible, so is the stillness that Webster insisted on accompanying it, as if to say (very loudly) “This is the silent part!” Eventually, the dramatic chin tilt gave way to formulaic posture. Think of the emotional difference between someone staring you in the eye, completely still and someone, staring you in the eye with a loose gaze as if about to say something but somehow not. The former is less disconcerting because the stillness says, after a while, “nothing is about to happen;” however, the latter contains the same quality of unpredictability found in Martin Seligman’s theory of learned helplessness.

Hyde Park’s production of Thom Pain is good, but it hasn’t tapped into that exposed nerve ending that makes the play great. If only he let that existential dread linger a few more seconds. Maybe then we’d find ourselves in the trap set by Eno, where we laugh, weep, fear and hope all at the same time.

—PHILLIP JOHN
Phillip John is a writer and musician based in Austin, TX.